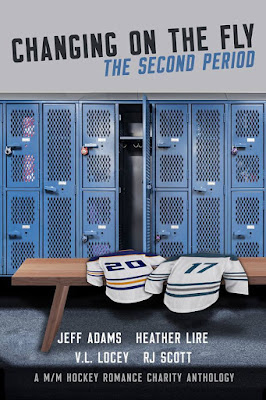 
Changing on the Fly is a celebration of romance, featuring four M/M stories about hockey players falling in love on – and off – the ice. All proceeds from the anthology will be donated to a charity that supports inclusiveness in athletics.

The anthology will be available starting in October 4, 2017, for a limited time only.

It includes the following stories:

Head in the Game by Jeff AdamsSecond Chance at Love by Heather LireRookie Moves by V.L. LoceySecrets by Rj Scott

Jeff Adams’ – Head in the Game

After a disastrous breakup, pro hockey defenseman Roger Jacobson’s game is slipping. With his contract up for renewal he has to do something quick because his fourteen-year career is on the line. Roger returns to his hometown to work with his old coach, while helping run the summer hockey camp. But Dylan Baker, a handsome graduate student and the coach’s son, proves to be a romantic distraction that Roger couldn’t have anticipated.
Can Roger’s trip home fix his game and mend his broken heart?

Growing up in Holiday, Vermont Zach and Tony were best friends. After high school, they drifted apart as their lives and careers took them in different directions. When they run into each other on vacation they fall back into the easy friendship they’d had as kids.
The one thing they didn’t expect was the sexual tension between them. As they explore these new feelings for each other they discover that sometimes the last person they expected fall for is their Second Chance at Love.

It’s been three months since New York Nightwings superstar center and captain, Riley Zeally, came out. The glare of the media has been incredibly bright but Riley’s used to dealing with the spotlight. His boyfriend, Keiffer, isn’t. The intense scrutiny of being at the side of such a huge sports star is proving to be incredibly stressful for the one-time hustler.

Details about his former life on the streets is now common knowledge, his life with Riley is under a magnifying glass, and his past is about to step out of the shadows in an even bigger way. Can a rookie in the ways of the press and professional athletics survive the pressure of sharing his life with the league’s most famous gay player? Will the tentative new love Riley and Keiffer share fold under the weight of fans and fame?


RJ Scott’s Secrets
Benji is the skater in the league who brings down the height average. Coming in at five eight, he's used to players chirping at him all night about his height.

Including the sexy defenseman for the Carlisle Rush, Avery Lester, with his stunning eyes and his cute smile.

When Benji makes a single inappropriate comment about Avery's ass, everything goes to hell. Add in Avery’s heroics during a hate crime, and things just go from bad to worse.
Abruptly it's not his height Benji has to worry about, but the chance that his closely guarded secret is shared all over the Internet.

Can love find a way, or will keeping secrets tear Benji and Avery apart?


Jeff Adams has written stories since he was in middle school and became a gay romance writer in 2009 when his first short stories were published. Since then he’s written several more shorts and novels, including some in the young adult genre, and he plans to keep writing as long as wonderful readers keeping picking up his books.

Jeff lives in rural Northern California with his husband of twenty years, Will. Some of his favorite things include the musicals Rent and title of show, the Detroit Red Wings and Pittsburgh Penguins hockey teams, and the reality TV competition So You Think You Can Dance. If forced to pick his favorite book it would be a tie between Michael Chabon’s The Amazing Adventures of Kavalier & Clay and David Levithan’s Every Day.

He also co-hosts the weekly show Jeff & Will’s Big Gay Fiction Podcast with his husband. You can learn more at BigGayFictionPodcast.com

If you’d like to drop him an email to say hello, or if you have questions/comments about his books, you can use the contact form.

Heather Lire has traveled all over the world, speaks several languages, collects romance books like they’re going out of style, and has multiple book boyfriends. Ok, she hasn’t been all over the world, except in her mind. She does however speak multiple languages and collect romance books. Her long-suffering husband and sons roll their eyes at all her book boyfriends. When she’s not busy on her next novel she can be found in her classroom where teaches one of those many languages, at one of her sons many sporting events or on twitter talking about what else, romance books.

Heather is also one half of the paranormal writing duo Kenzie MacLir.