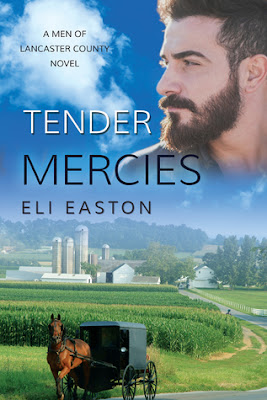 Eddie Graber’s dream of a sanctuary for rescued farm animals was about to come true when his partner backed out at the last minute. Now Eddie risks losing the twenty-five acre property in Lancaster County—and all the hopes he held for it—before the project even gets off the ground. He needs help, he needs money, but most importantly, he needs to rediscover the belief in a higher purpose that brought him here in the first place.

Samuel Miller worked hard to fit into his Amish community despite his club foot. But when his father learns Samuel is gay, he is whipped and shunned. With just a few hundred dollars to his name, Samuel responds to an ad for a farmhand and finds himself employed by a city guy who has strange ideas about animals, no clue how to run his small farm, and a gentle heart.

Samuel isn’t the only lost soul to serendipitously find his way to Meadow Lake Farm. There’s Fred and Ginger, two cows who’d been living in a garage, a gang of sheep, and a little black pig named Benedict who might be the key to life, love, money—and even a happily ever after for two castoffs.

NOTE: This title is set in the same region as book #1 but features a new couple. It can be read as a stand-alone. 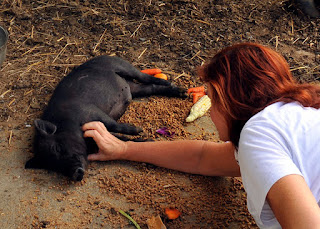 Exclusive Excerpt – The appearance of Bennie the pig
On Monday morning he got up as usual and fed the animals at the first light of dawn. He was in a foul mood. The emptiness of his Sunday spent alone weighed on his mind, worse now instead of fading as it ought to have done. He felt bad, heartsick, and he had no idea what to do about it other than ignore it.
When he put the cows and sheep into the pasture, he saw something move in the grass and then come out into the open near the barn. It was a small critter about the size of a toaster. It was black. It was… a pig. It was a very small pig.
“Huh,” Samuel said out loud, watching as the little pig snuffled the ground, making its way closer to Fred and Ginger. They stood in a morning stupor, eyeing the pasture.
The pig got close to one of Ginger’s hind legs and sniffed at it in a friendly fashion. Ginger startled sideways in fear and turned her head, lowering it threateningly at the pig. She chased it off a few feet, then she and Fred walked into the grass and began to nibble.
The pig casually nosed its way toward them again. It made a grunting sound as if saying hello. Again Ginger chased it away, farther this time, tossing her head angrily. Stay away, she was saying.
Samuel shook his head. “Huh,” he said again.
Where the heck had the pig come from? As far as Samuel knew, they weren’t next to a pig farm. Maybe it had been born in the wild. He’d never seen or heard of wild pigs near his home in Paradise, but maybe there were some around Mount Joy.
He gave up worrying about it and went into the barn. He got out the wheelbarrow and pitchfork he used for mucking, put on the thick canvas gloves. He moved the wheelbarrow to the back of the cow stall and began cleaning up. A little while later, he felt something touch his boot. He glanced down to see the little pig.
As soon as he looked at it, the pig scurried a few feet away and faced him, sniffing the air with its black nose. Smart pig to move away like that. Samuel had a pitchfork in his hands, and he wasn’t afraid to use it.
“Go on!” he hollered. “Get!” He stomped in the pig’s direction.
The pig gave a piteous squeal and ran back into the pasture.
Glowering, Samuel went back to work sifting through the soiled straw and putting it in the wheelbarrow. When he’d filled it, he put down the pitchfork and pushed the wheelbarrow outside. There was a manure pile on the other side of the driveway, up near the vegetable garden. It was uphill from the barn over grass and gravel. He trundled over there, struggling with the heavy wheelbarrow, and dumped it. Pushing a heavy load like this was one of the tasks his bad foot made challenging, but he’d never complain to Eddie. At least there was no snow. This job would really be tough in the winter.
He paused for a moment to catch his breath. He wiped the sweat from his brow with his sleeve. Would he be here next winter? Why should he be? He had no claim on the place. No more than… no more than that stupid pig.
He rolled the empty wheelbarrow back to the barn and began on the sheep’s stall, leaving the door wide open to get fresh air in the place.
He felt lousy, and that was a fact. There was nothing physically wrong with him, but he sure had an ache of the heart.
He turned to pull the wheelbarrow farther down the stall and found the pig nosing around his boot again. With a flash of annoyance, Samuel kicked at it. “Get out of here!”
The pig was fast, but Samuel’s boot managed to make contact. The pig was airborne for a few inches before it landed on its feet with a squeal and ran for the doorway.
Eddie stood there, backlit by the sun. The pig slipped past him and headed for the pasture. Samuel couldn’t see Eddie’s expression with the daylight behind him like that.
“What was that?” Eddie asked, his voice tense.


“A pig.” Samuel shrugged, feeling uneasy and guilty. “Craziest thing. Must be wild. Been hangin’ around for a few days, I think.”
Eddie turned and stalked toward the pasture.
Still uneasy, his heart hammering wildly, Samuel decided to follow Eddie. He leaned the pitchfork against the wall, took off his mucking gloves, and went to the door of the stall. Eddie was leaning against the gate to the pasture, hand shielding his eyes as if looking for the pig. But there was no sign of it.
When Eddie turned, his expression was angry. Samuel had never seen Eddie angry like this, and he flinched. Eddie’s face was red, his mouth was a thin line, and his eyes snapped.
When he spoke, his calm tone felt threatening. “Finish what you’re doing, then please come up to the house, Samuel. I need to talk to you.”
“You can talk here,” Samuel said.
“No, at the house.”
With that Eddie walked up the driveway. 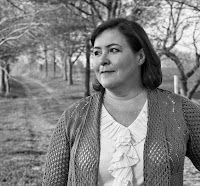 Having been, at various times and under different names, a minister’s daughter, a computer programmer, a game designer, the author of paranormal mysteries, a fan fiction writer, an organic farmer and a profound sleeper, Eli is happily embarking on yet another incarnation as a m/m romance author. As an avid reader of such, she is tinkled pink when an author manages to combine literary merit, vast stores of humor, melting hotness and eye-dabbing sweetness into one story. She promises to strive to achieve most of that most of the time. She currently lives on a farm in Pennsylvania with her husband, three bulldogs, three cows and six chickens. All of them (except for the husband) are female, hence explaining the naked men that have taken up residence in her latest fiction writing.