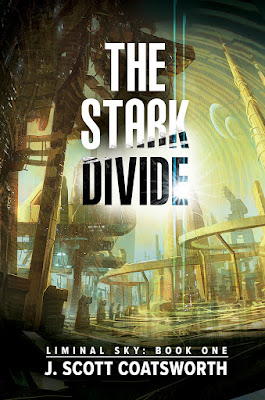 Book One of Liminal Sky

“DRESSLER, SCHEMATIC,” Colin McAvery, ship’s captain and a third of the crew, called out to the ship-mind.


A three-dimensional image of the ship appeared above the smooth console. Her five living arms, reaching out from her central core, were lit with a golden glow, and the mechanical bits of instrumentation shone in red. In real life, she was almost two hundred meters from tip to tip.


Between those arms stretched her solar wings, a ghostly green film like the sails of the Flying Dutchman.


“You’re a pretty thing,” he said softly. He loved these ships, their delicate beauty as they floated through the starry void.


“Thank you, Captain.” The ship-mind sounded happy with the compliment—his imagination running wild. Minds didn’t have real emotions, though they sometimes approximated them.


He cross-checked the heading to be sure they remained on course to deliver their payload, the man-sized seed that was being dragged on a tether behind the ship. Humanity’s ticket to the stars at a time when life on Earth was getting rapidly worse.


All of space was spread out before him, seen through the clear expanse of plasform set into the ship’s living walls. His own face, trimmed blond hair, and deep brown eyes, stared back at him, superimposed over the vivid starscape.


At thirty, Colin was in the prime of his career. He was a starship captain, and yet sometimes he felt like little more than a bus driver. After this run… well, he’d have to see what other opportunities might be awaiting him. Maybe the doc was right, and this was the start of a whole new chapter for mankind. They might need a guy like him.

Do you ever base your characters on real people? If so, what are the pitfalls you’ve run into doing so?

In my weekly serial tale, “The River City Chronicles”, I based a number of characters on friends and family. It actually went pretty well – I was able to draw on their traits and personalities to make interesting, three dimensional characters. The problem? Some of the folks thought I portrayed others’ characters more accurately and with more love than their characters. That was really hard, something I didn’t anticipate when I started. I made some changes to try to address the problem, but it’s something I won’t forget next time I consider doing the same.

How long do you write each day?

Typically I try to write for an hour to an hour and a half a day, usually between 12 and 1:30 when my husband Mark is at the gym. I try to sit down as close to noon as possible and write for the full hour and a half. But I also write sometimes in the car or in line at the post office or in the twenty minutes before a movie starts. I love Apple’s Pages for this, but at need, I can also write in an email and then send to myself.

LOL… well, technically, I don’t punish myself, at least not physically. I just feel endlessly guilty when I’m not writing regularly or am getting too close to a deadline. Good old writer guilt.

But I do reward myself. I use the chocolate method – a square of dark chocolate for each page I finish. It’s a sweet job, if you can get it. :P

Do you read your book reviews? How do you deal with bad or good ones?

Only official reviews. I used to read my Amazon and Goodreads reviews, but that way lies madness. I remember one review I read that was so comically awful that I had to laugh. The guy said something about how my writing wasn’t worthy of my distinguished name, *sigh*

So yeah, now I only read reviews from legit review sites and reviewers.

How long on average does it take you to write a book?

The first one took me about five years – the one that was rejected by ten publishers and cratered my nascent writing career.

When I came back to writing 20 years later, I started with short stories and novellas, and have only recently started working my way back up through novellas and novels. These days, I finish a novel in about five months, from start to submission. I’m working on my fourth one now.

Scott spends his time between the here and now and the what could be. Enticed into fantasy and sci fi by his mom at the tender age of nine, he devoured her Science Fiction Book Club library. But as he grew up, he wondered where all the people like him were in the books he was reading.

He decided that it was time to create the kinds of stories he couldn’t find at his local bookstore. If there weren’t gay characters in his favorite genres, he would remake them to his own ends.

His friends say Scott’s mind works a little differently – he sees relationships between things that others miss, and gets more done in a day than most folks manage in a week. He loves to transform traditional sci fi, fantasy, and contemporary worlds into something unexpected.

Starting in 2014, Scott has published more than 15 works, including two novels and a number of novellas and short stories.

He runs both Queer Sci Fi and QueeRomance Ink with his husband Mark, sites that bring queer people together to promote and celebrate fiction that reflects their own lives.