Many thanks to Sandra at My Fiction Nook for hosting a guest blog for my upcoming historical novel CUT HAND. (As she did for my previous book, JOHNNY TWO-GUNS.) Your kindness is greatly appreciated.

The stanza from my poem, “Echoes of the Flute” and the book’s blog state CUT HAND’S theme as clearly as anything. 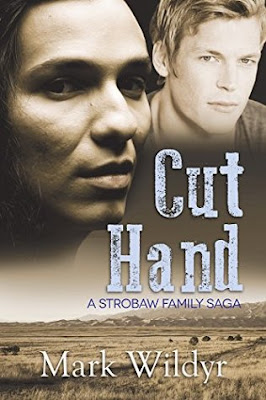 Far from the world he knows, he’ll find a home.

And in the arms of an unexpected man, he’ll find love.

Young Billy Strobaw comes West to escape the stigma of his Tory family. In the Dakota Territories, he encounters the Yanube warrior Cut Hand. Billy’s attraction to the other man is as surprising as the Yanube perspective on same-sex love. Unlike Europeans, the Siouan tribe celebrates such unions. Billy and Cut Hand can live as partners and build a life together, which Billy agrees to do.

As Billy struggles to acclimate to a very different culture, quickly discovering the Yanube have as much to teach him as he has to impart to them, a larger struggle is brewing. The white man is barreling through the Great Plains, trampling underfoot anyone who stands in his way. As a leader of his people, Cut Hand must decide whether it will be peace or war.

In a historical romance taking place against the epic backdrop of the early American West, where a single spark can ignite a powder keg of greed, lust for power, and misunderstanding, one man must find his place in history and his role in the preservation of all he has come to value.

Before he was Yanube (a fictional band), Cut Hand was a Mohawk, a Comanche, and I don’t remember how many others. I carried him from childhood when—as a tubercular child—I lived in my small-town library among wonderful men, women, children, and critters of other people’s minds. John Fenimore Cooper was a favorite of mine… as was Edgar Rice Burroughs.

Upon reaching adulthood, I found that Cut Hand refused to leave my side, or at least my mind. The result is this book plus four others in this saga. The following excerpt comes early in the story at the end of Chapter 1. Billy joins two seasoned frontiersmen as traveling companions. The trio captures a young Indian warrior and holds him until they pass through his tribe’s territory. Billy is assigned the task of guarding the prisoner and finds strange things happening to him.


*****
After we ate, Split sat cross-legged in front of our prisoner and talked gibberish for a while. Splitlip Rumquiller, who took his byname from an old hatchet wound, had pre-eminence among us by dint of superior experience. Nearing fifty, he spoke several dialects and knew the tribes to avoid and those who would do business with the white man. He had walked this particular route north of the Santa Fe Trail twice before. The Indians called him Splitrum.
At last the battered old frontiersman turned to us. “Name’s Cut Hand, because a that scar.” Split indicated a long-healed wound on the youth’s left hand. “Tribe’s sorta a cousin to the Sioux. The argot’s near the same. Understands me good enough, though some words is different. Calls his band the People of the Yanube. That’s a river off to the north. Pappy’s the misco, the headman. Cut Hand was off in another camp visiting a gal. Musta been good poontang, ’cause them others flat-out jumped him on the way back home. They kilt his pony, but he hightailed it for the hill country.” Split hawked and spat even though he’d used up his chewing tobacco a week past. “Been trying to shake them for half a day.”
Split turned to Red. “So’s you’ll rest easier, he’s gonna stay with us till we put some distance twixt him and his village. Won’t give us no bother less’n you have another go at him. When we’s satisfied, he’ll take his knife back and head home.”
Red was a small, grum man of rusty hair and crazy green eyes, who tended to rise at a feather. A shanty Irishman from somewhere around Boston, he reputedly had a wife and five carrottopped fry. No one knew why he had taken to the willows and appeared on the Santa Fe Trail five years back, although the set of iron ruffles that now confined our prisoner’s wrists might provide a clue.
“I say we just kill him,” Red proposed. “Ain’t no use taking chances. Then we’s free to worry about them others. Shoulda give them two a lead ball twixt the eyes when we had the chance. Now they knows about us, it’s bound to be harder.”
“Ain’t my way to kill without no need,” Split growled in a low voice.
Red gave in sourly. “Just don’t let him git in my way. And them irons stays where they is.” He shot a thumb at me. “You’re gonna have to watch him. You don’t git no sleep, that’s your plight.” He turned back to Split. “I’d feel better we git some water twixt us and his people. They a river anywheres close?”

“One south a us. Said to be another trail to Fort Wheeler that a way.”
Red spoke to me again. “I ain’t sleeping with him. Find yourself a place off in the woods and chain him to a tree. If them other los come, they’ll take your topknot and leave mine where it be.” I took “los” to be a scurrilous name for red men.
“Ain’t a bad idee,” Split mused. “Them others found our sign by now. If you got chores, best git on them. I’ll find a spot for you to bed down.”
“Chores?” Then understanding dawned. “Oh! Come on, Cut Hand.” I got to my feet. The big youth rose effortlessly, listened to Split for a minute, and then strode off, dragging me along by my rope.
We walked half a league before he found a spot he considered satisfactory. I shrugged. It appeared no different from a dozen others we passed without pausing. The Indian ignored my eyeballing his nakedness as he stepped out of his breechclout, but he spat staccato sounds until I stood on the other side of the bush as he went about his private business. I tied my end of the rope to a sturdy branch to perform my own, fully realizing this was a useless effort as he could easily escape by merely jerking it free.
As we washed in a cold, clear freshet, I was unable to keep my eyes off him. A tight black bush crowned his long, thick manhood. If he noticed my observation, he gave no sign. When we were finished, he was unable to tie his flap one-handed, so I did it for him. As I performed the awkward chore, my hand—necessarily, I thought—pressed against his thigh. My reaction took me by such surprise that I fumbled. I grew excited so abruptly, had I not already passed water, it would have been impossible to do so. My fingers lost their grip, dropping the leather apron to the ground. I bent to retrieve it and found my eyes on a level with his genitals. Purposeful or not, I lost my balance and grasped his thigh to regain my equilibrium. My thumb invaded his freshly washed pubic hair. I scrambled to my feet and aggressively went about fastening his drawstring without daring to meet his eyes.
That task finally done, I cast about for the way back to camp. Cut Hand gave a subdued snort and immediately set off in the wrong direction… leading us straight back to the others.
In our absence Split had scouted a spot fifty yards down the hill, well protected by a grove of hemlock and scrub. I laid out my bedroll while the old man and Cut Hand grunted at one another. Before he left, Split put the prisoner on a blanket with his back to a small, sturdy tree and ran the chain around the bole.
After slaking my thirst from a canteen, I tipped the container to Cut Hand’s lips. He finished drinking and nodded his thanks. I thoughtlessly wiped a dribble of water from his chest. As I touched him above the left nipple, I was lightning struck. My finger caressed his dark aureole independent of my will. My nerve ends jangled. The hair on my arms bristled.
Jerking back, I sat cross-legged in the gathering darkness faintly broken by moonlight filtering through the forest canopy. “I didn’t mean to do that. I don’t know why I did. Never met a real Indian before! That’s stupid!” I gabbled. He comprehended none of my protestations. To get off a treacherous subject, I put a finger to my own chest. “I’m Billy.” I touched him on the sternum, burning my digit. “You’re Cut Hand. I’m Billy!” I droned.
Sucked into a mysterious vortex, I flattened my palm against his breast, feeling the thud of a strong heartbeat and experiencing the power of his chest muscles. I swallowed hard and moved my fingers along his ribs and across his belly. Light-headed, giddy, and lacking the strength to resist, I dropped my hand to his groin, an act so heinous my muscles froze. Suddenly, he cocked his head.
“You fellers all right in there?” came Split’s raspy voice.
“Y-yes.” I snatched my hand away.
Split entered our little clearing. “Jest wanna make sure I kin git here in a hurry if needs be. They likely won’t come till first light, but that ain’t something you kin count on.”
“You think they’ll come?”
“Never kin tell ’bout Injuns.”
Cut Hand spoke in a low voice. My ears flamed in the belief my shameful actions were revealed.
“He says they’ll come,” Split explained. “They’s Pipe Stem warriors, long-time enemies. They knows who his pappy be. Be big medicine to count coup on the headman’s son. And he kilt one a them, don’t fergit. Asks you to chain him kinda loose, give him room to move. Do what you’re easy with,” he added, taking his departure.

Mark Wildyr is an Okie by birth and New Mexican by choice who turned a childhood interest in Native American cultures into a career. His seven published novels and approximately sixty short stories detail how attitudes toward homosexuals—who once held places of honor among some of the tribes—began to change upon the coming of the white man, with his suspicion and fear of those who are “different,” ultimately becoming pariahs even among their own people as the Europeans became dominant.

Wildyr continues to be fascinated by how different people interact together to discover who they are when measured against others. He gives back to his community by teaching a free writing class at an Albuquerque community center.