Welcome to our Grand Finale Celebrations for the amazing

Today's post is all about the Misadventures of Doc and Dirk, commonly known as The Dirk Tales, plus our author interview. There's also a chance to win once more!


He's a middle-aged, newly single, gay photographer starting life over. Along comes a freshly out nineteen-year-old, irreverent free spirit who wants to be his apprentice. Mismatched by more than a generation, what could possibly go wrong? Everything! And it's AWESOME!


Dirk's First Time. Every gay boy has his first experience. Usually it's a memorable, exciting personal time of discovery and intimacy between two young people. But two comic book characters? Is it horseplay or Cosplay?


The Boy At The Gym. First impressions can be deceiving. Sometimes that boy in the baggy clothes, talking to himself in the gym isn't as shy as he appears. Sometimes there's a deviant imp lurking beneath that freckled mask of innocence. Beware the Trojan Nerd! 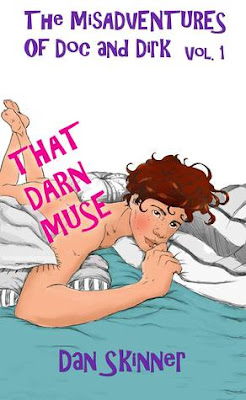 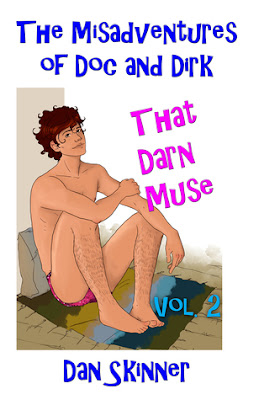 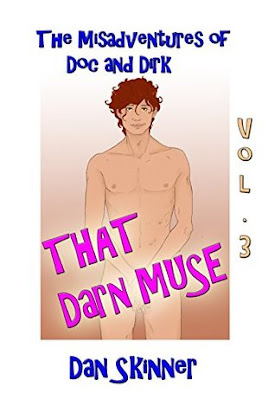 Get all three volumes, plus extras, in one book: 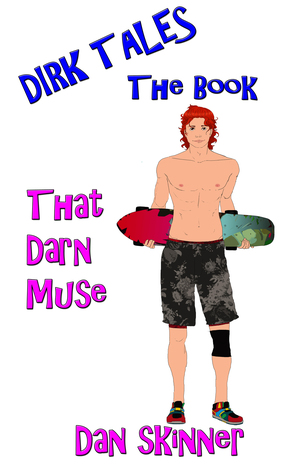 As I’ve noted before, I believe the boy was born with nudists genes. He appears to dislike clothes – especially when he’s in the comfort of his own room. No sooner had I pulled up my book to read, Dirk began pulling off his clothes. This is not an abnormal routine for him when we are conducting our Skype chats. His attire for the majority of these video calls is a pair of boxers and his socks. If he wants to be more at ease, just the socks. Most of him remains hidden beneath desk level except for the occasional glimpses of his naked ass when he jumps up to make or get a cup of coffee from the machine at the back of his room and scurry back with the cup held in front of himself. This was going in the only socks direction… Dirk assuming that his guest couldn’t see him anyway. I, however, was alarmed when he grabbed the waist of his boxers, sat, and clearly, though unseen by me, disrobed entirely.
“Dirk!” I hissed at him through the screen.
Harris leaned forward in the background. He was smiling. “He’s getting naked; isn’t he?” he asked.
Dirk seemed surprised. “H-How did you know?”
Harris chuckled. “My dorm mate is like you, doesn’t like clothes either. When he starts to undress he gets real quiet like the silence won’t give away what he’s doing. But it’s the silence that gives it away. You got real quiet.”
Dirk stared at me through the screen with disbelief. “The logic of that is screwing with my head,” he said.
With that, Harris began slipping out of his shirt. “You don’t mind; do you?” he asked as he undressed to his tan-colored BVDs. We both stared at him – long, lithe legs and undies sporting a most significant bulge as he leaned back on the bed, almost naked.
“Oh my God, he’s hot!” Dirk whispered, moving close to the screen.

“I’m blind. Not deaf. And thank you!” Harris spoke from across the room, now smiling broadly.
Dirk reached back under the table. “Maybe I should put my underwear back on,” he said in an even softer tone.
“Blind. Not deaf. And thank you again. I’ve been working out.”
Dirk pressed his face to the screen and mouthed the words, “I am so hard!” before sinking in his chair, looking flustered.
We took turns reading chapters to our guest. This was good practice for me because there’s quite a difference in reading a book to yourself and hearing the words and dialogue aloud. You learn you have to act, to convey emotion and action through your intonations. Dirk performed this instinctively. It was a learning process for me, but I was getting the hang of it.
When it rains, it pours. My next call came from Dirk’s Grandmama. This is one helluva grand lady. She’s seventy-something, classy and dynamically energetic. She neither looks nor acts her age. Her hair is salt and pepper but her personality is piss and vinegar. Despite the designer clothes and expensive manicure, I believe there is a hippie lurking inside. She likes to drink but I suspect she could roll a tight one to compete with any of Dirk’s campus buddies. The short version of this is age is only a number. An attitude is ageless, and hers has a portrait hidden in an attic somewhere. She’d been reading my work. More specifically she’d just read one of my more erotic gay tales, A Summer of Guiltless Sex and thoroughly enjoyed it. So much so, that she wanted to present me to a club of her lady friends to do a reading from it.
Yes, my mouth dropped open. A group of seventy-year-old women wanted to listen to me read from my novella about two guys arranging for buddy sex for one summer. And if you’re wondering if it’s graphic… well, I actually blushed when she told me the book selection. Mind you, it has nothing to do with the age of the audience, considering the mindset of the woman arranging it. My discomfiture was the idea of reading sex scenes aloud… to a group of people… period. Now I genuinely had something about which to be nervous. Dirk was eating my anxiety up like fairground cotton candy.
Naturally, they selected one poignant scene… and one very raunchy scene for me to read. The one many readers comment about in the mail I receive. It takes place after the two male MCs go skydiving, are surging with adrenaline, and meet in the men’s restroom afterwards. Your imagination can direct you to the logical conclusion of what takes place. Graphically. Now picture reading that aloud to a roomful of women. The thought alone made me blush.
I expressed to my MuseNerd several times that I was having serious reservations about it. He wouldn’t accept that.
“I have an idea!” he announced when I’d made the complaint for the dozenth time. “Let’s play roles. I’ll be one character, and you the other. That way there’s two of us acting it out and you won’t feel like all the attention is on you.”
Normally I resist his ideas. They tend to be impulsive. But this one seemed to have a real solution to my dilemma. We began practicing reading the scenes with the role-playing and it actually made me more comfortable. Even with the explicit nature of the sex, the notion that the attention wouldn’t be entirely focused on me seemed to allay my case of jitters. He’d struck gold again. 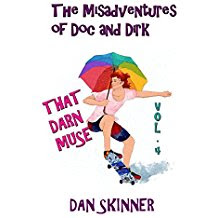 Our Interview with Dan Skinner:

I plot things out to the inth degree. No seat of the pants. Wouldn't know how to do that and envy people who can.

I don't know that I have a favorite character. But the one I identify the most with is Chris, the blind musician in my sci-fi novel Xperiment. I feel like I'm wise but a complete innocent sometimes.

Least favorite character is Dick's mother in The Price of Dick. The character was inspired by someone who was just as awful.

I don't think I would change anything. Most of my books contain real experiences that I've learned from. But if I could go back and change my experiences, it'd be my entire childhood or lack thereof because I grew up in an Evangelical family. I miss not having anything normal to look back on.

I have several projects going. Inch by inch on each one. Dunno which one will be finished first. Just released SEXCAPADE which, again, is based on a real life experience,

If you wanna write...just listen to the voice in your head... write with that voice. It'll be the real one.

Howdy, my name is Dan Skinner and for those of you who don’t know me I’m a photographer of male/male romance book covers and a gay author. I live in the Midwest and I’m an avid runner. For those not acquainted with my work you can find my novels on Amazon. The first is MEMORIZING YOU, a YA tale of first love. Others are THE BIBLE BOYS, THE PRICE OF DICK (don’t laugh it actually has another meaning, hehehe), The ART OF THE HEART, A SUMMER OF GUILTLESS SEX and a gay Sci-Fi Thriller entitled XPERIMENT. I also have an oldie published at Dreamspinner Press entitled COVERBOY. So, there’s a little something for everyone.

For those interested in my photography I have two galleries: http://danthedanimal.deviantart.com/ and: http://theknobgoblin.tumblr.com/

Be forewarned, they are NSFW and very adult-oriented. So sit back and enjoy. I hope to add new and entertaining stuff everyday!

Thanks for celebrating with us. We hope you found some new books to put on your TBR, and learned a few fun things about this fabulous author.