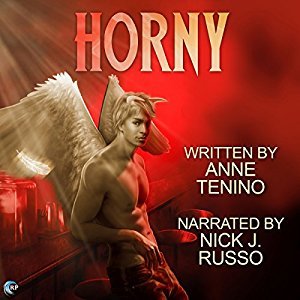 
Ryan Caulfield is a devout avoider of risk, so it comes as a surprise when he agrees to help a group of supernatural law enforcers catch Zeus (the god voted Least Likely to Keep It in His Pants). But how could he say no? He’s nothing if not law-abiding, even if it’s a legal code from another plane of existence. Besides, it all seems harmless enough . . . at least until the half-naked and all-hot immortal with wings and horns shows up.

In his century as an investigator for the Olympic pantheon, Leander of the eroté has solved a lot of cases and slept with a lot of humans. But on this investigation, it looks like he won’t be doing either. His assigned task is bogus, and the most alluring mortal he’s ever met is determined to avoid hooking up.

But the pull Leander feels toward Ryan the bartender won’t let him turn his attention away for long. Soon, he finds himself interested in much more than his usual dalliances with mortals. Now if only he can convince Ryan he’s worth the risk.

Well this was a cute way to pass a bit of time...

'Horny' was a cute story that took more than a little poetic license with Greek mythology. When Ryan Caulfield ends up with a group of supernatural law enforcers in his bar hunting for a less than law abiding Zeus the last thing Ryan expects to happen is that he'll be attracted to one of them and even more surprising they're attracted to him. As a paranormal investigator and an eroté, Leander's use to not having to work for his conquest but when it comes to Ryan things just are coming easy to Leander and not everything's as it seems to be.

With a title like 'Horny' the one thing that you could reasonably safely assume is that this is not a serious story and you're right. There were some funny and entertaining moments in this one unfortunately they were interspersed with moments of what felt a little bit like the story was maybe trying too hard. While the first half of this story waffled between 2 and 3 stars the second part made up for it and was a little more consistently on a 3 star level. I found myself far more interested and invested in what was happening and where my mind had wandered a bit at the beginning I found myself paying closer attention to what was happening and enjoying myself a bit more during the last half of the story.


While the story started out feeling very much like insta-love/lust at first things became far more interesting when it got dialed back a notch and Leander had to start working for what he wanted and both men are taking the time to get to know each other along with still having a wayward Zeus to bring to justice.

Nick J. Russo was the narrator for this light and amusing story and his voice added depth and character to the story and making for yet another entertaining listening experience.