ARC Review: Kidnapped by the Pirate by Keira Andrews 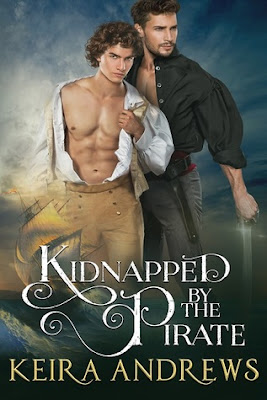 
Will a virgin captive surrender to this pirate’s sinful touch?

The setting: pirate ship, somewhere in the Caribbean

Nathaniel Bainbridge is traveling by ship with his pregnant sister to meet their scheming father in the New World, an island near modern-day Bahamas called Primrose Isle. But before the ship can reach its destination, it's attacked by the The Damned Manta, a pirate ship ruled by the infamous Captain Hawk, who just struck bloody gold.

"My treasure, my prize, my plum. That is all you are until your father pays what I'm owed."

Hawk is a lonely man who dreams of a life away from the seas. Conscripted by the British Navy at age 15, Hawk escaped only to be branded a pirate by Nathaniel's greedy, power-hungry father. Hawk is loyal to his men and swears to keep Nathaniel at arm's length, even as he grows more possessive of Nathaniel with each day.

Nathaniel is a ray of sunshine. Kind, brave, keeping a shameful secret, filled with a deep longing he doesn't understand, Nathaniel won't back down, even when Hawk is cruel. He vows to break through Hawk's staged veneer to the heart of the man.

Nathaniel is 18 to Hawk's 41, but the age gap hardly matters. This is a different time, and Nathaniel isn't a child. He craves a man's touch. Seeing the world through Nathaniel's eyes makes Hawk feel young again, even as he claims his soul is dark:


Initially the greatest of enemies, Hawk and Nathaniel become lovers. Hawk must choose: Nathaniel or his men? Love or fealty? Desire or revenge?


True hell was to love.


This is a beautifully written, complex story with a rich setting, pitch-perfect dialogue, and real, multi-faceted characters—not just Nathaniel and Hawk but the secondary characters as well:

- Nathaniel's sister Susanna, fearless, smart, and supportive (I loved Susie so much!)

- Hawk's men, including the slightly dour Mr. Snell, who would do anything for his captain but worries about where Hawk's loyalties lie, and Mr. O'Connell, forever grateful to Nathaniel for saving his life

This book is everything I wanted and MORE: fast-paced, incredibly sexy (eager virgin, submission/domination, mild humiliation kink & primal coupling on the beach), with adventure and romance perfectly balanced.

As a lover of history, I also have to mention the setting, which felt so authentic and true to the time and place. I am by no means an expert on pirates, but I was never pulled out of the story by anachronisms. I'm not remotely surprised. Keira Andrews always does her research. She's a master!

This is the ultimate love story, one where age and social class don't matter. There's even a daring rescue, but I won't tell you who rescues whom. In the end (and a very happy, hopeful, truly fulfilling end it is), Hawk and Nathaniel rescue each other.

"You are no man's lesser. Least of all mine. And the love I have for you is like no other."

The world belongs to those who read.