Release Blitz: As Sure As The Sun (Accidental Roots #4) by Elle Keaton 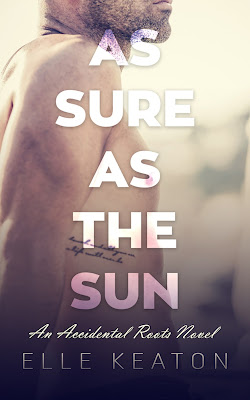 The universe is trying to tell Sacha Bolic something. A fire escape collapses under him, he lands in crap, and a killer barely misses his target... all in the same few seconds. And that's on top of a long list of mishaps and job dissatisfaction. Not one to ignore signals when they're shoved in his face, Sacha retires and uses his savings to buy an old building in Skagit, Washington. With a little help from DIY videos, he’s going to bring it back to its former glory. And, yeah, it’s a metaphor. If he makes one change, others will follow…

Seth Culver avoids entanglements, romantic or otherwise. Who needs them? He’s learned the hard way that people betray you or leave. Still, Seth finds people compelling. He kind of collects them, learning their secrets before letting them go their own way. His commitment to no commitments may have met his match in Sacha. Handsome and hot, Sacha seems to offer a permanence that scares Seth more than anything ever has. Seth will have to decide if he’s going to grab it by the balls or keep watching from the sidelines.

The old building harbors a secret from the past. A box of inconsequential belongings hidden for decades hints at lives imagined but not lived, reminding them both there are no guarantees in love, or this thing called life.

A standalone in the Accidental Roots series. 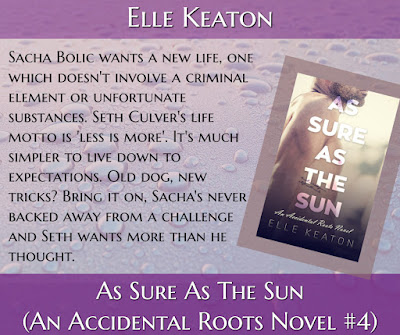 “I brought treats,” Seth said after admiring the results of Sacha’s overnight labor’s. He held up a small white paper bag, the kind pastries come in. “Fresh out of the oven.” In his other hand he held a dented silver thermos. “And coffee. Lots of it.”

“Danish?” Sacha reached to snatch the bag out of Seth’s hand, but the asshole jerked it out of range.

“Ah, ah, ah. You must want these pretty bad. What are you willing to do for one?” Seth teased, a wicked gleam in his eyes.

Seth looked good enough to eat, and Sacha was a starving man in more ways than one. Without thinking, Sacha moved toward Seth. Their chests were touching while Seth still held the bag of pastries out of reach. Seth’s breath was hot against Sacha’s cheek; his pupils dilated, reducing his irises to a strip of chocolate brown.

“Oh yeah?” Seth cocked his head to the side, exposing more of his neck. Seth smirked and the pink tip of his tongue swept out, moistening his lips. “I dare you.”

Fucking hell, he’d never backed down from a dare in his life. Sacha growled under his breath before inhaling deeply, worshipping the lingering scent of sweat and maleness that was Seth-specific. The striation of browns that made his eyes appear caramel when the light hit them right was easy to see and impossible to look away from. A week of this man in his dreams and he had no self-control.

Seth was playing a dangerous game. Sacha’s hands dropped of their own volition to rest on Seth’s hips. Seth’s lips parted. Sacha didn’t miss the invitation. Ignoring the cacophony of voices in his head telling him this was a bad idea, he pressed his mouth against Seth’s.

Fucking hell, it was perfection. Like a confection, sugary, hot, and sweet. It was impossible to resist sweeping his tongue across Seth’s lips.

Author, photographer, rare Pacific Northwest Native, Elle grew up in Seattle, WA., with the Cascade Mountain range to the east and Olympics to the west. Less than two hours northwest lie the majestic San Juan Islands. To the northeast is the Methow Valley and the scrub deserts of Eastern Washington. Geography ripe with material.