Blogtour: The Quarterback by Mackenzie Blair

Hello, I’m Mackenzie Blair and I’ve been reading romance novels ever since my mom took me to used book sale after book sale as a teenager. I loved that every romance novel had a happy ending. (Those covers were also pretty scandalous to my small-town mind, so there was probably a good dose of rebellion in my reading as well.) A few years ago, I discovered MM romance, and although I’d considered writing a romance novel for years, it turns out it took an MM story to finally inspire me to finish one!

So I hope you enjoy reading THE QUARTERBACK as much as I loved writing it. 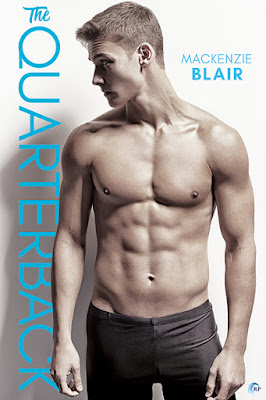 About a year and half ago, I had the flu. The kind where everything ached so much all I could do was lie on my sofa and watch Netflix, surrounded by a pile of gross tissues. Sexy, huh? I was flipping through my options and saw Queer as Folk, the American version. I’d seen the British version of the show…and I loved it. So I figured it was time to check out the American version.

A few days later, after some pretty impressive binge watching, I finished the series. But I wasn’t ready to let the stories go. So I stumbled into the world of FanFiction, which led me to the world of MM romance. How had I not know of this genre before? Probably because I wasn’t readying or trying new authors now that grown-up responsibilities were getting in the way.


But I rediscovered my love of romance and started reading two or three books a week. And then one night, at about 2am, a story popped into my head. I began to write. The classic ending to this story would be that this manuscript was THE QUARTERBACK. It wasn’t. I wrote about three chapters and lost interest. Then I tried two more storylines, again not really being drawn into the characters.

Then I started thinking about my small Southern hometown, and the characters of Trevor and Matt came to me. When my husband woke up in the morning, I had about 20,000 words written… and that became THE QUARTERBACK.

Trevor and Matt are the kind of guys I went to college with, the kind of guys I’m friends with now. Men who don’t neatly fit into a stereotype, but rather are complicated, cynical idealists who fear they won’t ever find their happy endings…even though they really, really deserve them.

Writing the rest of the book took many months. In that time, the Supreme Court ruled in favor of same-sex marriage, and writing this book became even more a celebration of love. As the novel comes out, the tides have shifted a bit – as I guess they always do, the ebb and flow of progress – but I hope it gives, well, hope that there are still so many good people in this world, the best of friends and unlikely allies.

And that by all of us reading these romances, we’re keeping the dream of happy endings alive and real.

Mackenzie Blair is an award-winning screenwriter in Los Angeles who’s written for shows and films you’ve probably heard of. Mackenzie grew up in the South but fled the humidity for earthquakes, university, and a brief stint in finance. As a cynical idealist, she prefers to write happy endings whenever possible.


To celebrate the release of The Quarterback, one lucky winner will receive a $30 Riptide gift card! Leave a comment with your contact info to enter the contest. Entries close at midnight, Eastern time, on September 16, 2017. Contest is NOT restricted to U.S. entries. Thanks for following the tour, and don’t forget to leave your contact info!