I haven’t written a guest blog in years; bear with me. It’s early, the sun is out but it’s a blessedly cool California morning, and I’m a quarter way through my first cup of French Press…bear with me. The coffee is Portola; a surprisingly good bean, and there are scarlet and purple gladiolas in the vase. Lavender is on my mind. I haven’t written anything about my latest novella because I’m trying to remember how it all began.

I think it started with pigs, as so many things in my life do. Having had the distinct privilege of owning a pot bellied pig as a pet for seven years or perhaps she owned me, it varied day by day as to who was in charge. They are genius creatures, always plotting and scheming and completely willing to not only challenge convention, and break rules but will look you directly in the eye while doing so. I could write on and on about the wonder of pigs but suffice to say she was a force of nature and absolutely brilliant. When she started incessantly grinding her teeth (absolutely maddening) for hours on end I immediately started doing research. Of course we took her to vet (no small task as the only vet who treated pigs was about 45 minutes away) imagine boarding a pig in a kennel into the back of a car. We would literally have to start the prepping the car the night before.

The vet found nothing and so I bought noise-cancelling headphones. We were told she was spoiled (obviously) and one person told us to spray her with water to stop the behavior. I tried it and she just slurped up the water. My husband and I had a different connection to Pearl; he definitely had the alpha male thing where Pearl would show respect by coming and putting her head on his shoe when he sat on the couch. Me, she challenged constantly. However, I had a bond with her and knew instinctually when something wasn’t right. I knew she was spoiled but my gut told me something else was up. Being a researcher and literally going out of my mind with the teeth grinding (a sound that still sends the hair on my neck on end) I got online and kept digging.

Eventually I found Sue Parkinson of Lil’ Orphan Hammies and connected. Oddly, I’d read an article about Sue in People Magazine a couple years before and had kept the clipping. From the first time Sue and I spoke I knew we would be friends. Luckily, Lil’ Orphan Hammies is only an hour or so from where I live. We spoke at length (Oh yeah, Lil’ Orphan Hammies is a pig sanctuary, this woman is literally the Saint of All Things Porcine) and she shared her wisdom and gave us much needed comfort. We also went and visited the sanctuary with many bags of apples and blankets as a humble offering from Pearl and her grateful dads.

Despite all of our efforts, which included bringing Pearl to a chiropractor because we thought it might be arthritis, Pearl died. She died at home in my arms. The vet, distraught, asked if she could do an autopsy because she needed to know what killed this pig and she felt she had somehow let us down (which she absolutely did NOT), she was waiting outside when we arrived and asked if she could carry Pearl inside…just a lovely, animal devoted person.

She called hours later and told us Pearl had pancreatic cancer. Pigs grind their teeth when they are in pain. They also have an extremely high tolerance for pain. Writing this, on this sunny California morning, it’s hard not to get emotional. I wonder how long she suffered, and regret spraying water at her…but in the end she died with me. My husband says it’s because she knew I could handle it.

I’ll end this sad portion of the blog by saying there is a magical silence in death. Something enters the space around you, fills you up and then leaves. Everything for several seconds is clear, wonderful and terrible. I imagine birth must carry the same magic.

So how does this relate to M/M erotica and my latest novella ‘Lavender?’ Good question. After Pearl died we went back to the sanctuary, as we were driving I spotted a small sign that said “Lavender Farm” and insisted we check it out, this behavior of mine has led us on many bizarre adventures. It couldn’t have been more beautiful, evocative and glorious. We bought lavender water, lavender soap, lavender…everything. I grew up on a farm and have semi-rose colored glasses on that life. I think there is always a part of me left in the fields and when I get to experience rural life in CA, I am deeply connected to it. Every time I visit Sue and the pigs I stop at this lavender farm. One time my sister came with me. A single man was working in the shop and when we left I looked at my sister and said “I’m going to write a story about this place.”

My sister, having the imagination of a brick (I say that lovingly and she’d agree) said, “Do it.” Not believing I actually would…though she should have known better.

When we left the lavender farm (of which I learned from Sue there were several in the nearby area) we stopped at a park to stretch and I saw a soccer team practicing and immediately knew the story would revolve around that man in the shed selling lavender and a soccer player. Now ask how many years ago was that? Probably five.

Tons of edits later, my publisher closing, rejection letters, one publisher had a six month response time…(what’s that about?) and finally, and I mean FINALLY…Lavender is in the world.

If you’ve read any of my other stuff you know I don’t follow the rules. Many people don’t like my writing and that’s fine, a few do and that’s fine. I write from a place of my truth and it’s not pretty, although it’s always sensual. Lavender isn’t just about sex, to me it’s about loneliness, grief and finding a way to get back to the light. 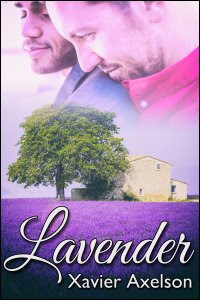 Following the sudden death of his father, Lawrence "Law" Crow must not only comfort his bereaved mother, but also find the strength to continue running the family business, a local and beloved lavender farm in the mountains of northern California. At first, consumed with his own grief and struggling to find meaning in life, Law indulges in his vices, mainly by surrendering to his sexual urges with numerous men, all in a desperate battle to forget his pain and to end the emotional turmoil tearing him apart.

But when a stunningly handsome and passionate Spanish soccer player named Garbi suddenly crosses his path, Law discovers light in the possibility of love. Does Garbi have the ability to heal Law's shattered heart, provide him with purpose, and help him fully embrace the joy of living once again amidst the beautiful and fragrant lavender fields?

Release Blitz: Fused With Him by Kylie Kent