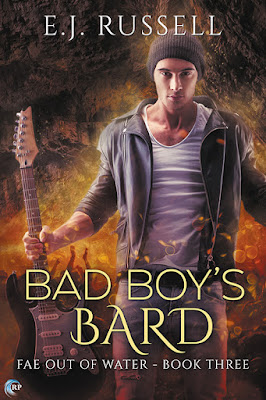 As far as rock star Gareth Kendrick, the last true bard in Faerie, is concerned, the only good Unseelie is . . . well . . . there’s no such thing. Two centuries ago, an Unseelie lord abducted Gareth’s human lover, Niall, and Gareth has neither forgotten nor forgiven.

Niall O’Tierney, half-human son of the Unseelie King, had never lost a wager until the day he swore to rid the Seelie court of its bard. That bet cost him everything: his freedom, his family—and his heart. When he’s suddenly face-to-face with Gareth at the ceremony to join the Seelie and Unseelie realms, Niall does the only thing inhumanly possible: he fakes amnesia. Not his finest hour, perhaps, but he never revealed his Unseelie heritage, and to tell the truth now would be to risk Gareth’s revulsion—far harder to bear than two hundred years of imprisonment.

Then a new threat to Gareth’s life arises, and he and Niall stage a mad escape into the Outer World, only to discover the fate of all fae resting on their shoulders. But before they can save the realm, they have to tackle something really tough: mending their own broken relationship.


To celebrate the release of all three books in the Fae Out of Water series, one lucky winner across all three tours will receive a GRAND PRIZE of a $50 Riptide credit! Leave a comment with your contact info to enter the contest. Entries close at midnight, Eastern time, on September 23, 2017. Contest is NOT restricted to U.S. entries. Thanks for following the Bad Boy’s Bard tour, and don’t forget to leave your contact info!