In today's post, we're looking at another three of Brent's books, plus five little-known facts about this author. And all the way at the bottom is also another chance to win!

First up, Three Truths And A Lie 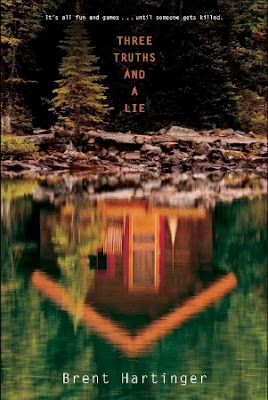 A weekend retreat in the woods and an innocent game of three truths and a lie go horribly wrong in this high-octane psychological thriller filled with romantic suspense by Lambda Award–winning author Brent Hartinger.

Deep in the forest, four friends gather for a weekend of fun.

Truth #1: Rob is thrilled about the weekend trip. It’s the perfect time for him to break out of his shell…to be the person he really, really wants to be.

Truth #2: Liam, Rob’s boyfriend, is nothing short of perfect. He’s everything Rob could have wanted. They’re perfect together. Perfect.

Truth #3: Mia has been Liam’s best friend for years…long before Rob came along. They get each other in a way Rob could never, will never, understand.

Truth #4: Galen, Mia’s boyfriend, is sweet, handsome, and incredibly charming. He’s the definition of a Golden Boy…even with the secrets up his sleeve.

One of these truths is a lie…and not everyone will live to find out which one it is.


I couldn’t believe we were actually doing this. Skinny-dipping? With Galen and Mia? What if I got, uh, excited? I don’t know if I mentioned this before, but Galen was a pretty good-looking guy. The last thing in the world I wanted was to see him naked. I didn’t want to see anyone except Liam naked, at least not when I was naked too. I’d always been able to control myself in the locker room at school, but I’d had a few close calls, barely making it into my underwear in time.

And then there was Mia seeing me naked. I didn’t want her laughing at me, or comparing me to Liam. He and I were actually both about the same size, not massive, but nothing to be embarrassed about either. On the other hand, it was cold outside, and the water was probably cold too.

But it’s not like I could say no to skinny-dipping, not without looking like a complete idiot.

None of us had started undressing yet, and I think it had something to do with the light. It was twilight, the exact moment between day and night. It was sort of breathtaking. The water lapped gently against the shore, and the fish were feeding, so everywhere you looked there was a splash, like giant raindrops. I imagined I’d somehow become miniaturized, and I was standing at the edge of a puddle at the start of a rainstorm. The universe was suddenly such a massive, awesome place, and I knew deep in my bones that I was just this tiny, completely insignificant part of it, but somehow that made it all even more amazing.

“This was your idea,” Mia said. “That means you go first.”

“I mean it,” Galen said. “Pussies!” At that, he yanked down his pants, boxers and all, and kicked them aside.

I was standing behind him, and I made a point not to stare.

But he had the kind of ass that was impossible not to notice—round and dimpled. His back was incredible too, lean and rippled with muscles. Then there were his shoulders and arms, which were the best kind of broad, like those of a natural athlete, not the kind of a guy who is a slave to the gym and his protein supplements. His whole body was this golden brown, like the toasted marshmallows we weren’t going to be having that weekend. How was it that he didn’t have tan lines? And if there was hair on his legs, it was lighter than the stuff on his head, so his whole body looked hairless, like he’d been buffed clean. Then again, I was only seeing him from behind. 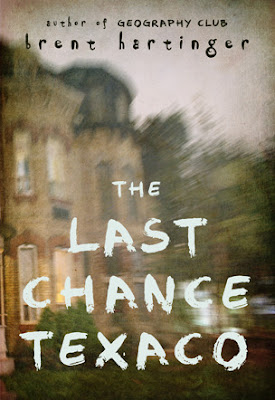 Fifteen years old and parentless, Lucy Pitt has spent the last eight years being shifted from one foster home to another. Now she’s ended up at Kindle Home, a place for foster kids who aren‘t wanted anywhere else. Among the residents, Kindle Home is known as the Last Chance Texaco, because it’s the last stop before being shipped off to the high-security juvenile detention center on nearby Rabbit Island–better known as Eat-Their-Young Island to anyone who knows what it‘s really like.

But Lucy finds that Kindle Home is different from past group homes, and she soon decides she wants to stay. Problem is, someone is starting a series of car-fires in the neighborhood in an effort to get the house shut down. Could it be Joy, a spiteful Kindle Home resident? Or maybe it’s Alicia, the bony blond supermodel-wannabe from the local high school who thinks Lucy has stolen her boyfriend. Lucy suspects it might even be Emil, the Kindle Home therapist, who clearly has a low opinion of the kids he counsels. Whoever it is, Lucy must expose the criminal, or she’ll lose not just her new home, but her one last chance for happiness.

In the tradition of S.E. Hinton’s The Outsiders and Louis Sachar’s Holes, Hartinger writes about a subculture of teenagers many people would like to forget, in a novel as fast-paced and provocative as his first book, Geography Club.

And third today, Grand And Humble 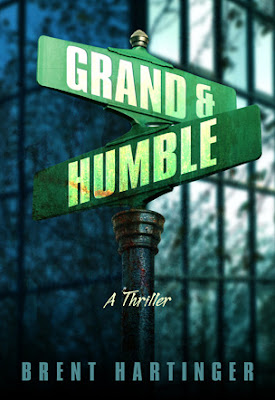 
Harlan is the most popular kid in his high school, and Manny may be the least. And yet, Harlan and Manny both share the same sense of foreboding, that something is not quite right in either of their lives.

They have something else in common as well, even if they don’t know it. Fourteen years ago, when they were both three years old, a tragedy occurred–an accident that would link the two boys together forever, even as it ultimately drove them apart. It’s an event that both of them barely remember, but it haunts them still. Somehow both boys know that nothing will ever be right again until they can each unravel the secret of the terrifying instant that lies at the center of both their lives.

BRENT HARTINGER is the author of fourteen novels, including Three Truths and a Lie (Simon Pulse, 2016), which was nominated for an Edgar Award; and Geography Club (HarperCollins, 2003), which was adapted as a feature film in 2013, co-starring Scott Bakula, and is now being developed as a television series.

Brent is also a screenwriter, and eight of his screenplays have been optioned for film; four are currently in various stages of development. Brent’s writing honors include being named the winner of the Lambda Literary Award; a GLAAD Media Award; an Edgar Award nomination; the Scandiuzzi Children’s Book Award; the Screenwriting in the Sun Award, and a Writers Network Fellowship.

Hartinger is the co-host of the Media Carnivores podcast; a sometime-member of the faculty at Vermont College in the MFA program in Writing for Children and Young Adults; and the co-founder of the entertainment website AfterElton.com, which was sold to MTV/Viacom in 2006 (in a multimillion dollar deal). Brent lives in Seattle.


Thanks for joining our celebrations today. Come back next week for more of Brent's books and a personal story of how he met his husband. We'll also have another chance to win one of his books.