In today's post, we'll look at Shadow Walkers and Project Sweet Life, plus a personal story of how Brent met his husband. There's also another chance to win! 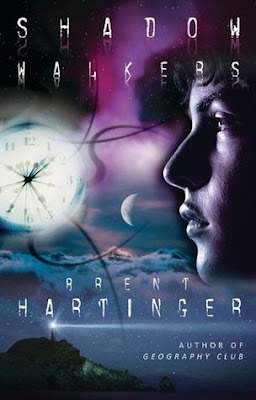 Zach lives with his grandparents on a remote island in Puget Sound in Washington State. With only his little brother, Gilbert, to keep him company, Zach feels cut off from the world. But when Gilbert is kidnapped, Zach tries the only thing he can think of to find him: astral projection. Soon, his spirit is soaring through the strange and boundless astral realm--a shadow place. While searching for his brother, Zach meets a boy named Emory, another astral traveler who's intriguing (and cute).

As Zach and Emory track the kidnappers from the astral realm, their bond grows--but each moment could be Gilbert's last. Even worse, there's a menacing, centuries-old creature in their midst that devours souls and possesses physical bodies. And it's hungry for Zach.

“What is it?” I asked, even as I felt the vaguest tingle of the chill I’d felt twice before, the one in my soul.

Emory didn’t look at me. It was like he couldn’t move, couldn’t even speak. He just kept staring into the corner.

I floated closer and took a look. The shadows were particularly thick there, and I didn’t see anything at first. Then I saw something curved and hanging—another coiled garden hose maybe. And there were two small round objects, almost white, suspended in the middle of the coils.

It wasn’t a hose. It was some kind of … creature. It was floating in the corner of the garage, not any bigger than a basketball.

And it had tentacles or legs of some kind. It looked like a cross between an octopus and a spider. I knew it was alive, because its legs were slowly curling in on themselves.
It’s the thing I saw earlier. The tentacle was real.

Now I stood frozen, hanging in space. Somehow I knew it was definitely in the astral dimension with us, a being without actual substance, but something made up of shadow and darkness, not light like Emory and me.

Had this creature followed us from the cabin? Emory had said he’d been drawn to me because he’d heard me making all that noise. Maybe this creature had heard me too, and then followed us back here to Hinder Island. I still didn’t know how populated the astral dimension was, but from the look of things so far, it was mostly deserted.

It wasn’t moving, so I edged closer to Emory. I could see the thing much more clearly now. It definitely wasn’t an actual octopus or spider. For one thing, it had more than eight legs—at least a dozen, maybe more. It floated there, quivering slightly with its legs splayed out.

But it had eyes, looking back at us.

These were the white objects I’d seen floating in the middle of the shadows. Lidless, they peered out at me from near the top of all that blackness. It was the whites of those eyes that had made me realize it wasn’t just a shadow in the first place. But as white as they were, the pupils were as black as the rest of the creature, dark and full of hate.

I don’t know how I knew with such certainty that these were human eyes, but I did. You could see the intelligence in them, and the anger.

The chill in my soul deepened, and I wanted to look away, but I couldn’t. The creature was such an appalling mixture, so obviously alien and yet also somehow human. I’d never seen anything like it—never even imagined anything like it. If being in the astral dimension meant becoming aware that the boundaries of the universe are artificial—that we’re all one—did that mean I was part of that
creature, and it was part of me? It was bad enough that it even existed.

But then, the very instant the creature made sense to me, it was gone. It didn’t vanish—it shot away, like a retreating octopus. Unlike an octopus, it didn’t leave a cloud of black ink in its wake, but because the creature was so dark, so black, it did seem to leave a dark spot in my vision even after it was gone.

Celestia Moonglow hadn’t said anything about any of this.

Neither Emory nor I spoke for a second. It had all happened so fast.

I didn’t need to be told twice. It was all I could do to get out of the dark confines of that garage. 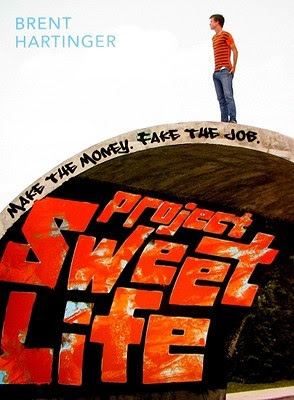 For most kids, fifteen is the year of the optional summer job: Sure, you can get a job if you really want one, but it isn't required or anything. Too bad Dave's dad doesn't agree! Instead of enjoying long days of biking, swimming, and sitting around, Dave and his two best friends are being forced by their fathers into a summer of hard labor.

The friends have something else in mind, though: Not only will they not work over the summer, but they're determined to trick everyone into believing they really do have jobs. So what if the lifeguard doesn't have a tan or the fast-food worker isn't bringing home buckets of free chicken? There's only one problem: Dave's dad wants evidence that his son is actually bringing in money. And that means Dave, Curtis, and Victor will have to get some . . . without breaking the law and without doing any work!


I met my husband because of a party, but I didn't meet him there. He saw me first, and sent his roommate over to check me out. His roommate discreetly quizzed me on what I was interested in (secretly seeing if my future husband and I had anything in common).

He finally hit upon the fact that I was writer, then mentioned how his roommate was a writer too. Would I be interested in joining a gay writers group?

A week later, I met Michael (my future husband) on a street corner, so he could take me to this writers group. We walked to the meeting and started talking along the way. I liked everything he had to say! (I also thought he was very handsome, which he is.)

A week later, I asked him out. He was hosting a dinner party the night I mentioned (he told me later he almost cancelled it, but decided that was bad karma). So he suggested another night.

BRENT HARTINGER is the author of fourteen novels, including Three Truths and a Lie (Simon Pulse, 2016), which was nominated for an Edgar Award; and Geography Club (HarperCollins, 2003), which was adapted as a feature film in 2013, co-starring Scott Bakula, and is now being developed as a television series. Brent is also a screenwriter, and eight of his screenplays have been optioned for film; four are currently in various stages of development.

Brent’s writing honors include being named the winner of the Lambda Literary Award; a GLAAD Media Award; an Edgar Award nomination; the Scandiuzzi Children’s Book Award; the Screenwriting in the Sun Award, and a Writers Network Fellowship.

Hartinger is the co-host of the Media Carnivores podcast; a sometime-member of the faculty at Vermont College in the MFA program in Writing for Children and Young Adults; and the co-founder of the entertainment website AfterElton.com, which was sold to MTV/Viacom in 2006 (in a multimillion dollar deal).

Thanks for celebrating with us. Come back next week for our Grand Finale, with a look at Russel Middlebrooks: The Futon Years, our author Q&A and another chance to win!