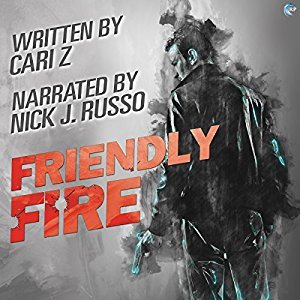 
Elliot McKenzie is the king of reinvention. Five years after losing his job and his lover and almost going to prison, his self-help program, Charmed Life, is more successful than he’d ever dreamed. He thinks he’s put his sordid past firmly behind him, until he starts receiving cryptic threats . . . and realizes it might not be as over as he’d hoped.

Security expert Lennox West has been lost since a deadly skirmish in Afghanistan led to his forced retirement from the Army. His PTSD makes helping his ex raise their daughter a challenge. When his ex’s sister asks him to set her boss up with a security system, Lennox isn’t expecting anyone like Elliot McKenzie—a man who captures his attention and makes him feel relaxed for the first time since leaving the service.

But Elliott is dangerously stubborn. Even as the threats against him escalate, he refuses to involve the police, and Lennox fears that stubbornness could kill him. A battle of wills ensues that brings them closer to each other than either man expected. But if the threats turn real, they might not live long enough to get their future together.

I'm going to start at the beginning with this one and once again that means I want to talk about the cover. While I don't factor covers into my rating, I do like to mention them especially when they appeal to me as much as this one did. I won't lie between the cover and the blurb for this book, I was hooked. I wanted to read this book and that's what book covers and blurbs are for. They're just another way to promote the story within and in this case for me they worked really well. Now onto the story within...

Have you ever met someone and things have just clicked into place with them and just to be clear I'm not talking about insta-love here. I'm talking about those times when you meet a person and you're comfortable with them from the word go, conversation comes easily, you like them from the minute you meet, there's a level of comfort and trust that you don't always get with everyone you meet. This was Elliot and Lennox. From the moment they met they liked each other, yes there was physical attraction but what there wasn't was that impression of 'oh-my-god-this-is-it. He's the one' nope, it was more like 'This guy's cool and hot. I'd hang out with him. Hell, I'd even do him, if he's interested.' No wedding bells or starry eyed wonder' here. These are two mature men who have each had more than their share of life experiences.

The romantic part of the story was driven by a bit of mystery and suspense, but it never fully took over or surpassed the relationship that was developing between these two men. If anything at times the mystery/suspense part of the story gave the romance a bit of a push.

For me one of the best things about this story was the casual and comfortable way these two men bantered back and forth with each other and with everyone else for that matter...


"You're not going to offer me a beanbag chair?"
"I wouldn't want to insult your dress. It would clash so terribly with the paisley pattern." Elliot sat across from her. "Now. What would you like to talk about first, my being shot or my addictions?"

and then there's Serena, Elliot's assistant and Lennox's ex-sister-in-law and her own force of nature...

"The chips?"
Serena sighed. "She said to bring a side and I don't cook, you know that. this is why I have all my parties catered.
"Don't worry," he assured her with a wink. "I don't judge."

and Lennox tends to have equally interesting conversations...

"You're done early tonight."
"I've got a thing with the ex and her family."
Carl shook his head. "What part of ex don't you understand? You don't stay friends with 'em, Lennox; that's how you go crazy. You give 'em alimony and child support and take the kids over the summer. That's how you handle an ex."

Add to all this a moody but pretty cool teenage daughter, a Pomeranian named Holly and a co-worker who seems a little too anxious to shoot things then throw in some steamy lovin' between our sexy MCs and you've got the makings of a story that I can totally get behind.

So that was my review when I read this book nearly a year ago and really nothings changed it's the same story I remember reading and not only did I enjoy the audio book as much...actually a bit more than reading the book and that was very much due to the awesome narrating skills of Nick J. Russo. Mr. Russo's definitely one of my favorites when it comes to audio books and he's never failed to deliver when it comes to me enjoying an audio book that he's narrated.

'Friendly Fire' is the 15th book that I've listened to by this narrator and honestly I'm only anticipating that number growing...'cause I'm listening to an audio book that's narrated by Nick J. Russo as I type this review...sorry, you'll have to wait to find out which one it is this time but while you're waiting you can always check out Cari Z's 'Friendly Fire' narrated by Nick J. Russo there's a good sample over on audible.com...it's just a thought...Happy listening!

An audio book of 'Friendly Fire' was graciously provided by the publisher in exchange for an honest review.