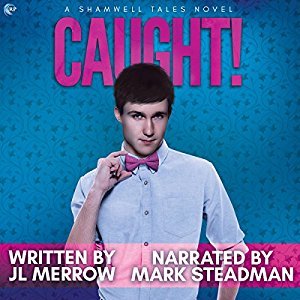 You can run from the past…but the past runs faster.

Behind Robert’s cheerfully eccentric exterior lies a young heart battered and bruised by his past. He’s taken a job teaching in a village primary school to make a fresh start, and love isn’t part of his plans. But he’s knocked for six—literally—by a chance encounter with the uncle of two of his pupils.

Sean works in pest control, rides a motorbike, and lives on a council estate. On the face of it, he shouldn’t have anything in common with Robert’s bow-tie, classic-car style and posh family background. Yet Robert is helpless to resist Sean’s roguish grin, and a rocky, excruciatingly embarrassing start doesn’t keep the sparks between them from flaring.

Despite Robert’s increasingly ludicrous attempts to keep his past where it belongs, his past hasn’t read the memo. And soon his secrets could be the very things that drive Sean away for good...

Warning: Contains the alarming misadventures of a pest control technician, a stepsister with a truly unfortunate name, and a young man who may have more bow ties than sense.

'Caught' was the first book in J. L. Merrow's 'Shamwell Tales' and I enjoyed listening to this on audio.

Robert's teaching at the village primary school trying to rebuild his life after losing his last teaching position and the man he thought was the love of his life. He's happy with teaching and not looking to replace the man who left him.

On the surface Sean doesn't seem to be anyone that would interest Robert and the only thing these two have in common is the fact that Sean's nephew's are in Robert's class. But looks are deceiving and Sean effortlessly charms his way into Robert's life but not without more than a few mishaps and misunderstandings, due largely to Robert's stubborn desire to keep his past a secret and his rather quirky and naive personality.

I was more than a little amused by Robert's inclination to be overly precise and often times take things far more literal than necessary. I like Robert and found him to be quirky, kind and sensitive, no to mention a bit of a worrier as well. While Sean was more laid back, spontaneous and just generally more outgoing about life.


There were also some excellent secondary characters in this story...Robert's friends Rose and Fordy, his family and Sean's. But I think my favorite secondary characters this time around was Charlie and his dad. Charlie was a sweet little boy in Robert's class who liked to dress up at home and wanted fairy wings for Christmas and while Charlie's mom wasn't around he had an awesome dad because dad didn't want him not to dress up or have fairy wings he just didn't want his boy to get hurt for wanting these things and he wanted to try and understand his son not change him...I bet there are a lot of kids out there who'd love a dad like this and as a parent I have to say all we can do is love our kids and try our best to give them a home where they're always loved for who they are and know that they shelter from the storm called life...yep, Charlie and his dad made this one good all on their own.

Mark Steadman was the narrator and needless to say he's definitely got the Brit accent nailed. I'm guessing possibly because he's British. But it's also more than that, he also gives the character voices the individuality, consistency and expressiveness that I enjoy in an audio book.

Unfortunately in spite of the good stuff I just didn't really feel the connection between the MCs with this one...not like I did with 'Muscling Through' the only other book I've read by this author. So while 'Muscling Through' was a 5 star read and this one was only 3 stars, I still had more than a couple of LOL moments and look forward to enjoying more by this author...whether it's e-book or audio book, I'm always on board for a good story and few laughs...although maybe no rats next time.

An audio book of 'Caught' was graciously provided by the publisher in exchange for an honest review.