When people ask me what I would change about my first book, Leather Nights, the list is really long. I wrote the book in 26 days and it’s one of my longest books. I think I averaged five thousand words a day. I knew what I wanted to say. I had a detailed outline and I wrote from it almost to the letter. Unfortunately, if I had it to do all over again, Leather Nights would be a very different book.

Leather Nights was written in 2009 when only three states in the US allowed gay marriage. Going into that year, there were only two but when Iowa became the third state to vote to allow same sex marriage, that’s where I decided to send Jake Maxfield and his husband Cade Littlebear to get married. Jake even joked in the book about it, saying something about Cade’s decision to get married there having something to do with corn or some such. There weren’t a whole lot of choices for gay couples back then.

The biggest thing I’d change in any of my books, if I were to write them all over again, is the sheer quantity of sex scenes in them. I think there are seven in Leather Nights, my first book. The only reason I know that is because when I turned the book into an audio book, I had to listen to it. I hadn’t opened it for five years at the time and hearing all that sex proved to me that a little goes a long way. Once I heard all of that, I was determined to change that in future books. It was way over the top.

When I wrote the Death and Destruction series I was determined to change a lot of the preconceptions some people have about the south. Now granted, I don’t live there, but I have visited Texas, Florida, and Georgia. I sent Jarrett and Thayne to West Virginia, where Jarrett hails from. Sure, there are some ignorant folks in the series but there really aren’t many bigots. Most folks they meet in Jarrett’s home state are good, honest, hard-working folks, working their butts off to make a better life for their families. Of course, the boys aren’t openly gay in West Virginia. Maybe things would be different if they were. We have more than our fair share of bigots in California too.

As an author, I’ve changed a lot of things about the way I write. I research more. I study up on cultural issues more. I’ve always tried to be sensitive to individuals but in older books every once in a while, my characters may say or do something that I wouldn’t allow today. I don’t have any excuses. I’m human. I’m still learning. I’ve come a long way in my writing in the last eight years. I hope it’s gotten better and I know it’s made me a better person. 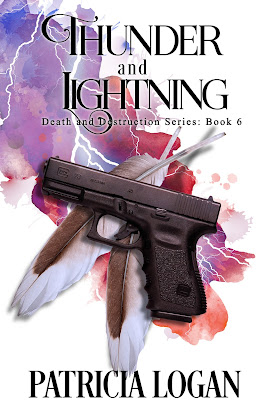 Jarrett Evans and Thayne Wolfe have been partnered in the ATF for nearly two years and their love and commitment to each other has grown over time. Now faced with one final challenge, the boys are headed to Arizona to help Thayne’s mom, stumbling headfirst into a brand new case. When a man is shot on Dot’s sister’s ranch, their informal investigation leads to the Native American reservation bordering the property.

Juggling tricky tribal politics isn’t something Jarrett and Thayne are accustomed to but, as with most things in their lives, nothing is ever uncomplicated. When a surprise sighting shakes Thayne to his very foundation, they call out for help and their colleagues ride to the rescue along with a little help from the FBI. The mystery on the reservation only deepens when they start putting two and two together. Questionable cigarettes at the Ahtunowhiho Trading Post may be the least of their worries.

From the mean streets of Los Angeles to the vast deserts of Arizona, Thayne and Jarrett once again brave the minefields of bad guys, bigshots, and a vicious betrayal that kicks them in the ass. But one thing is certain. Thru thunder and lightning, Jarrett and Thayne are never alone. They’ll fight for each other down to the last man standing, even if it costs them their very lives.


International bestselling author Patricia Logan, resides in Los Angeles, California. The author of several #1 bestselling erotic romances in English, Italian, French, and Spanish lives in a small house with a large family. When she’s not writing her next thriller romance, she’s watching her grandchildren grow up way too soon, and raising kids who make her proud every day. One of her favorite tasks is coaxing nose kisses from cats who insist on flopping on her keyboard while she types. Married to a wonderful gentleman for 30 years, she counts herself lucky to be surrounded by people who love her and give her stories to tell every day.