Hi! This is Piper Vaughn and Avon Gale and we're here today to talk about our sexy new contemporary romance, Permanent Ink, in which the worlds of street art and tattooing collide when a silver-fox tattoo artist falls for his much younger apprentice - who also happens to be his best friend's son. 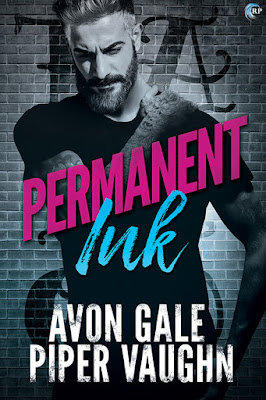 At twenty-three, Poe Montgomery is going nowhere. He still lives in his father’s basement and spends most of his time tagging with his friends. When an arrest lands him in debt, Poe accepts the front desk job at Permanent Ink, the tattoo shop owned by his father’s best friend, Jericho McAslan. Jericho is nearly twice Poe’s age, but with his ink and prematurely graying hair, he quickly takes the starring role in Poe’s hottest fantasies.

Jericho is known for his ability to transform poorly designed tattoos into works of art, but he was once as aimless and misdirected as Poe. Wanting to pay it forward the way someone once did for him, Jericho makes Poe his apprentice and is determined to keep things strictly professional. Easier said than done when Poe makes his interest—and his daddy kink—abundantly clear.

Jericho can’t resist Poe or their intense chemistry for long. But between the age gap, tension with Poe’s father, and Poe’s best friend calling him a sellout, they’ll need to ensure they’re both on the same page before they can rewrite their rocky start into something permanent.


Avon grew up in the southern United States, and now lives with her very patient husband in a liberal Midwestern college town. When she’s not writing, she’s either doing some kind of craft project that makes a huge mess, reading, watching horror movies, listening to music or yelling at her favorite hockey team to get it together, already. Avon is always up for a road trip, adores Kentucky bourbon, thinks nothing is as stress relieving as a good rock concert, and will never say no to candy.

To celebrate the release of Permanent Ink, one lucky winner will receive a $20 Amazon gift card and a “Poe” coffee mug! Leave a comment with your contact info to enter the contest. Entries close at midnight, Eastern time, on August 12, 2017. Contest is NOT restricted to U.S. entries. Thanks for following the tour, and don’t forget to leave your contact info!