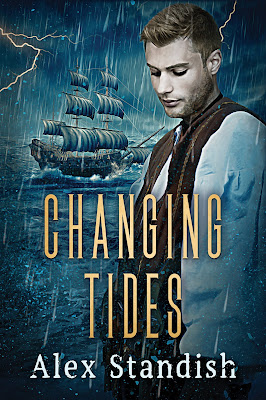 While most pirates sail in search of riches, Captain Devon Hall, the infamous Phantom of the Caribbean, is driven by vengeance. Devon has sworn to put an end to the corrupt governor of Jamaica and break the ruthless man’s stranglehold in the Caribbean.

When Devon is wounded and stranded on land, an unlikely rescuer comes to his aid. Brett Campbell is nothing like his uncle, the governor, and his goals are not so different from Devon’s. Brett longs for freedom, but his obligations to protect those under his uncle’s control keep him from fleeing. Throwing in with Devon might increase both their chances of success—and survival.

When the governor’s attempts to destroy Devon escalate and place Brett in danger and in the hands of the ruthless and depraved pirate Captain Blackburn, Devon must risk everything to save the man he loves and repay his enemies.

All Devon’s ever wanted is his ship, his freedom, friends who stand by his side through thick and thin, and someone to love. But facing dangers at sea and on land, Devon wonders if they will live to enjoy it all.


In his feverish delirium, Devon found himself back at his father’s forge, a place he had called home all his life—watching as it burned to the ground and listening helplessly as his father cried for deliverance that would never come.
“Father!” he cried out in agony, but he didn’t move, couldn’t move. “Father, no!”
Locked in his nightmare, Devon dug his fingers into the ground as he sobbed on his knees, head lowered in defeat. He couldn’t find the will or the energy to even attempt to rise. He lay there, feeling the rain pouring down on him, washing away the ashes of his life and the acrid smell of death.
As his fingers curled around a fallen button, one that belonged to the uniform of one of the governor’s guards, Devon knew he deserved this; speaking against Governor Campbell’s ruthless reign without a thoughtout plan was asking for trouble. As his father had said, actions always had consequences.

With the last of his strength, Devon collapsed onto his back. Eyes closed against the heavy drops of rain, he gave himself over to unconsciousness.

Thanks to My Fiction Nook for hosting me today, I appreciate it.

A friend once asked if my choice of reading genres carried into my own choices for writing. The answer is a definite yes. To this day, some of my favorite stories are The Three Musketeers, The Adventures of Robin Hood, anything by J.R.R. Tolkien, and any book that relates to King Arthur and Merlin. Also, The Famous Five by Enid Blyton. (grin)

As such, what I write tends to be full of action, fast paced, with romance and a happy ending if possible, but also with strong friendships that help carry the characters to the end.

Alex Standish lives in Lisbon, Portugal, a beautiful and sunny country in Europe. She loves to read, travel, listen to good music, rock the vacuum cleaner like Freddie Mercury, and hang out with her friends. When she’s not at her day job or trying to win the lottery, she’s typing away at her laptop, Probie, writing homoerotic romance. She’s a multigenre author, striving to create engaging plotlines and characters that could stand on their own and hopefully tug at one’s heartstrings. In the last eight years, Alex has written one short story and three novels.