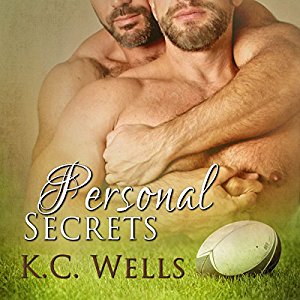 Blake Davis and husband Will are delighted when Ed Fellows turns up at the hospital the night their daughter is born-even if he is covered in mud from playing rugby and drunk out of his skull. Teammate Colin is the Good Samaritan who drives him there, and when he takes Ed home, Colin finds himself on the receiving end of a blowjob. He has no problem with that whatsoever. He's been in lust with Ed since Ed joined the rugby team some 14 months ago. Only thing is, Colin's assumed up 'til now that Ed is straight. Except the man sucking him off certainly didn't seem straight....

With friends Rick, Angelo, Blake, and Will to advise him, Ed finds himself on a completely unfamiliar road, as he struggles to accept that maybe the line he is walking isn't as straight as he'd first imagined...

‘Personal Secrets’ is book #3 in K. C. Wells series ‘Personal’, and we get to see Blake and Will become parents to an adorable baby girl, and Rick and Angelo are around and doing well. This is Ed’s story. Ed works at Trinity Publishing for Blake, and we met him back in book #1 Making It Personal.

Ed’s a down to earth guy who speaks his mind, he enjoys his job and playing rugby. He likes spending time with his teammate Colin…as a matter of fact he likes spending time with Colin so much that he wants them to be friends with benefits…or at least that’s what he starts out wanting, but as Ed and Colin spend time together, Ed begins to realize that what he feels and wants from Colin goes beyond friends with benefits, but the question is ‘what does Colin want?’

Colin’s wanted Ed for a long time. He just never thought his straight friend would ever want something more from him but when opportunity knocks…Colin’s not only willing to open the door he’ll happily prop it open if it means having a chance at the man who monopolizes his dreams.

In spite of office & family drama and unexpected exes and thankfully with the help of some good friends, Colin and Ed manage to work through Ed’s coming to terms with his sexuality and a bit of insecurity on the part of both men.

I loved the honesty between these to men; not that they didn’t have their misunderstandings, but they both worked hard to try and be honest with each other. Colin was sweet, patient and supportive of Ed. While Ed may have hesitated at times, ultimately, he always faced up to how he felt about things, and at times he may have even had a little help from his friends, but in the end Ed knew what he wanted and was willing to persist in his efforts to be the kind of man Colin wanted and would be proud of.

Cornell Collins is once again the narrator for this book, and I’ve enjoyed having the continuity of the same voices for these characters from story to story. The voice that was Ed in the first book was the same one that I heard in this book, and I enjoyed this a lot. After listening to all 3 of these audio books back to back, by the time I got to the final one it felt like listening to friends sharing their stories with me.

I’ve developed a sincere appreciation for listening to audio books like this that are from a series and have the same MCs or as was the case with this series the same core set of characters.

With the first book, Making It Personal, we had Blake and Will as the MCs but Ed, Rick, Karen and few other secondary characters were in this book and carried through to the second book, Personal Changes, where Rick became one of the MCs as we watched his story with Angelo unfold, and in book 3 again we are given the same cast of characters, with the addition of Angelo, as Ed and Colin’s story unfolds, and I’ve really enjoyed having the same person narrate each book giving me the continuity of having the characters voices remain the same from story to story.

I’ve enjoyed hearing these stories on audio and with my fingers crossed that Cornell Collins will continue as the narrator. I look forward to hearing more and spending a few more hours with the familiar voices of this group of co-workers and friends.

A audio book copy of ‘Personal Secrets’ was graciously provided by the publisher in exchange for an honest review.