Audio book Review: The Mystery of the Curiosities by C. S. Poe 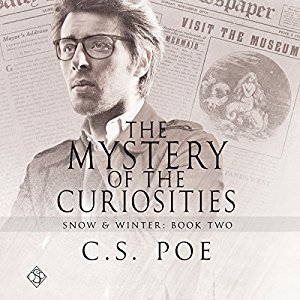 
Life has been pretty great for Sebastian Snow. The Emporium is thriving and his relationship with NYPD homicide detective, Calvin Winter, is everything he’s ever wanted. With Valentine’s Day around the corner, Sebastian’s only cause for concern is whether Calvin should be taken on a romantic date. It’s only when an unknown assailant smashes the Emporium’s window and leaves a peculiar note behind, that all plans get pushed aside in favor of another mystery.

Sebastian is quickly swept up in a series of grisly yet seemingly unrelated murders. The only connection tying the deaths together are curiosities from the lost museum of P.T. Barnum. Despite Calvin’s attempts to keep Sebastian out of the investigation, someone is forcing his hand, and it becomes apparent that the entire charade exists for Sebastian to solve. With each clue that’ll bring him closer to the killer, he’s led deeper into Calvin’s official cases.

It’s more than just Sebastian’s livelihood and relationship on the line—it’s his very life.

Once again this is an audio book for an e-book that I read back when it was released, and I liked it 4.5 stars worth and basically as far as the story's concerned I haven't changed my mind and my original review is still good to go...Original Review: The Mystery of the Curiosities

While I enjoyed experiencing this story again. I have to admit there was a little bit of a loss in the audio for me. Derrick McClain was once again the narrator for this one and before I go any further I just want to say I think the tiny issue here is truly a case of it's me. For some reason this time around there were a couple of times when Calvin's voice wasn't quite working for me. Most of the time it was good so I really can't say for sure but there were a couple of times where I just didn't find Calvin's voice as distinctive as I had in the audio book for 'The Mystery of Nevermore'. This combined with the fact that Seb and his lies of omission actually irritated me even more and there were times that I simply found Seb to sound whiny and honestly, whiny is just one thing that I don't do.


While the mystery part of this story wraps up within the pages of this book, we're still left with a lot more to go when it comes to Seb and Calvin's relationship. Calvin's got his own issues to deal with and he's finally realized that a future with Seb means it's time to deal and Seb's on board to be the loving and supportive boyfriend that Cal needs so I'm also on board to see where things go between these two and if we could just get Seb to stick with selling antiques and not solving mysteries maybe Calvin's stress would be reduced a bit more as well.

I still enjoyed the story overall, I'm wrapping this one up at 4 stars rather than the original 4.5 stars that I'd given the e-book.

An audio book of 'The Mystery of the Curiosities' was graciously provided by the publisher in exchange for an honest review.

Reading gives us someplace to go, when we have to stay where we are.   (Mason Cooley)