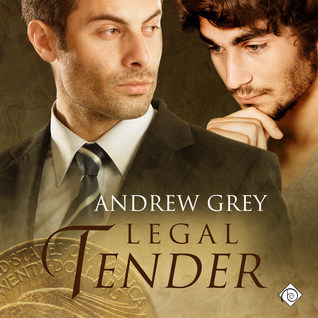 
Timothy left home when he was eighteen to get away from his reckless mother, but he never stopped visiting his grandfather, who taught him what love was all about. Now that Grampy has passed away, Timothy finds that the old man's legacy is everything Timothy has dreamed of—and more.

Inside the house Timothy loves so much is a cache of coins with historical value… and a mystery, because one of them isn’t supposed to exist. In memory of his grandfather, Timothy sets out to make sure that the mystery and the coins are given their due honor. In his quest to keep the government from confiscating his grandfather’s legacy, he meets Joiner, whose interest in Timothy is as clear and open as Timothy is guarded. There are things about Timothy's life and his past he doesn't want anyone to know, not even the kind man who is helping him with the complications of legal tender.

So maybe I should have just read the book...

I'm really torn on this one because in all honesty I wanted to really love this story. The blurb sounded so good that I couldn't really imagine not loving the story...and although I didn't love this quite as much as I'd anticipated there was a lot about the story that worked for me and I truly enjoyed.

While the story worked for me overall my biggest distraction came from the audio side of things and this is where I'm really torn...you see, I like John Solo. I sort of have a soft spot for him because it was his narration of Marie Sexton's 'Trailer Trash' that made me decide to start listening to and reviewing audio books. However, with this one the narration just didn't work for me and in all honesty I have to say I think this was a little bit me as well, but we'll come back to this later.

'Legal Tender' is the fourth book in Andrew Grey's 'Art Series' and while the blurb for the story intrigued me and sounded really good. In the end it turned out to be just 'ok'. Timothy has returned to his Grampy's home after finding out that his grandfather had left everything to him and not his drug addicted mother. Timothy left home at an early age after his mother betrayed him in the worst way possible. He's cut her out of his life and I say good for him on that one. She didn't deserve to be anyone's mother let alone someone as sweet as Timothy.

Coming back to Grampy's house has also reunited Timothy with his childhood friend, Dieter (one of the MCs from the first book in this series). Timothy also discovers that his Grampy's stories from his childhood were clues to a heritage that he'd been unaware of. Discovering a cache of old coins brings Timothy to Dieter's door in need of help from Dieter's partner, Gerald and introducing him to Joiner, whom Gerald task with finding out how they can enable Timothy to keep a rare coin that the American Government claims belongs to them as it was never monetized or so they claim.

As Joiner works to find a way for Timothy to keep his grandfather's coin the two men get to know each other and their initial attraction to each other becomes more, but the real question is will what they have be enough to keep them together when Timothy finally opens up about why he refuses to have anything to do with his mother.

I loved all the different aspects of this story and how things played out slowly revealing the connections.


Ok now for the audio portion of this review. As I said before I have a bit of a soft spot for John Solo so this pains me a little to say but for me the biggest problem was the audio. Overall the voices just weren't clicking for me. Gerald's voice was stilted and just seemed to have an arrogant tone to it and while I like confident...arrogant just doesn't do it for me and I found myself not liking Gerald a whole lot and then there was Timothy.  I wanted Timothy's voice to reflect my image of a man in his twenties who was sweet and while confident at times held a hint of insecurity especially when confronted with his past. I wanted to hear all the emotion in his voice when he spoke about his grampy, his mother, the things that happened to him as a child. What I felt like I was getting was a pre-pubescent boy. I liked Timothy and his voice just wasn't what I was envisioning it to be. So truthfully this wasn't a right or wrong thing it was just a case of it didn't work for me. However, on the upside Joiner's voice was ok for me, but still the over all narration just didn't work for me.

It's usually at this point that I really know whether or not an audio book truly worked for me because if it worked for me the audio book gets an overall rating but in this case while the book would have gotten 4 stars from me. In all honesty the audio sits somewhere around 2.5 - 3 stars. So I'm calling it a day at 3.5 stars and having faith that my next John Solo audio book will be a better experience.

An audio book of 'Legal Tender' was graciously provided by the publisher in exchange for an honest review.