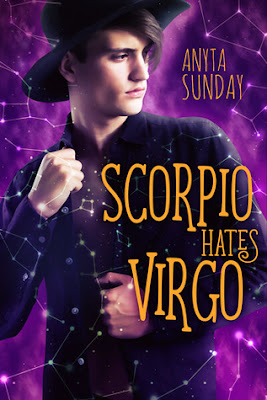 This year is all about healing the heart, Scorpio. It’s time to leave negative attitudes and stoic facades at the door and let others see the real, more vulnerable you.


Percy Freedman is not grieving. Absolutely not, take that back at once. No, he’s entirely sure that selling his dead aunt’s home and leaving the neighbors he’s known for years is the sane thing to do. Who in their right mind would keep the house that smells like all the hugs he’ll never have again?

Well, except his cul-de-sac neighbors. They all seem to think some paint and new furniture will clean the emotional slate. They all want him to stay.

Even his nemesis, Callaghan Glover.

Lured into a game of Sherlock Gnomes, Percy finds himself hanging out with his neighbors more than might be considered healthy. Along with juggling new and surprising verbal grenades from Cal, and his burgeoning friendship with Gnomber9, Percy is starting to wonder if selling might have been the grief talking after all . . .

That’s right, Scorpio. With a little patience, heartbreak might be a thing of the past . . .

Definition of SEMICOLON
: a powerful grammatical tool that, used appropriately, turns Cal on.


I need no other reasons to love Cal, but there are more:

He's a Virgo (like me); he likes dinosaur T-shirts (the ones with T. rex are Percy's favorite); he puts his family ahead of everything (including his education, which isn't so great); he's all about the gnomes (don't assume you know anything about gnome secrets, because you don't); and sometimes he lies just a little to get what he wants.

Percy is a Scorpio and doesn't trust easily. Returning to the cul-de-sac where his beloved aunt lived, Percy wants to sell her house and move on; he can't handle the memories. Percy is prickly and keeps people at a distance. He doesn't want to try because everyone always leaves.

Despite Percy's insistence that Cal is his nemesis, Percy and Cal are not enemies. They're not even frienemies. They're involved in an intricate mating dance that began years ago when Percy fell off his bike in front of a shirtless Cal.

[A]nd instead of asking if Percy was okay or needed an ice pack, [Cal]'d shaken his head and delivered the first verbal grenade, "All elegance, that was."

Sometimes the best relationships begin by accident and are forged in the valley of banter and denial.

Cal and Percy aren't clueless; they're stubborn. Percy refuses to fall for his straight (or is he?) neighbor, even as Cal pushes the boundaries of their friendship.

The secondary characters are awesome. One of Percy and Cal's neighbors is Crystal, Theo and Leone's mom, so, YES, we do see Theo and Jamie again, and they play a mean game of zombie rescue.

I had a few small niggles with the plot, which at times veered toward the TOO cutesy, but overall I loved this quirky, funny, and endearing story.

I surely hope there are more Signs to come.

Books break the shackles of time—proof that humans can work magic.