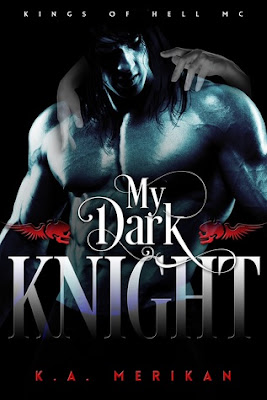 Newly single, Knight is done with relationships. All he's interested in is bringing down The Count, an Internet personality who is tarnishing his family name. An opportunity to crush him comes when the audacious clown shows up at the Kings of Hell MC clubhouse to film for his YouTube channel. But when Knight meets Elliot, the man behind The Count, he no longer knows what to do with him.

Knight has never seen a more pathetic creature than Elliot. He’s also never met anyone who needed him more. Skinny, messed up, and a bucket of trouble as thick as tar, everything Elliot does seems to be a wordless death wish. No matter how much Knight hates Elliot’s alter ego, under the makeup and theatrics hides a fragile young guy with a passion for history, and Knight can’t help but catch Elliot every time he falls.

Elliot has bad taste in men. Always hopelessly attracted to violent brutes, his favorite is a long dead serial killer. But he gets more than he’s bargained for when he seizes an opportunity to meet the man of his dreams. The ghost is manipulative and dangerous, offering Elliot all he’s always wanted, for a price he can’t possibly pay.

Elliot is faced with an impossible choice between two men.

One alive, one dead.

One carnal and honest, one drizzling sweet, poisoned promises into his ear.

One unwilling to commit, the other promising an eternity together.

And Elliot doesn’t settle for half-measures. He craves a love that is all or nothing, passion that will consume him, and desire to burn him alive. Elliot is ready to either get that, or die trying.

This is not a love story.

Knight, the VP of the Kings of Hell, does not do monogamy. He fucks around with every pretty thing that comes his way.

Elliot is a lost boy. As the Count, he's snarky and self-assured, but behind the wig and cheap, garish makeup lies a damaged soul who just wants to belong. Elliot worships William Fane, the sociopathic serial killer.

Elliot wants someone to own him and romanticizes Fane's brand of love: the kind that tortures and demeans, the kind that hurts and breaks.

That isn't love, of course, but Elliot has only ever known pain and loss and fear. He escapes in the macabre world of his imagination, where a sick, twisted love is better than no love at all.

Knight and Elliot clash at first sight, but they can't deny the lust and emotional connection building between them. Elliot falls to his knees when Knight snaps his fingers. He's the one person who is as fascinated with history as Knight is.

And there's a reason Knight has the name he does; he's a born protector and rescues Elliot time and again, even in the face of Beast's wrath. What Knight won't do is commit. He panics when Beast hints that Elliot is his. And Elliot, like a wounded animal, lashes out.

Initially, my heart broke for Elliot, but that empathy wasn't easy to maintain. Elliot often acts bratty, impulsive, and entitled. He makes some seriously bad choices, the consequences of which almost destroy the Kings of Hell.

That's not to say the Kings of Hell don't make dangerous choices of their own. They almost treat Elliot like a pawn in a demonic game. Granted, Elliot's delusions cross the threshold into madness, but helping him became an ill-conceived, disastrous experiment.

Jake the prospect plays a fairly big role in this book; he's still sucking any dick that comes his way and vies with Elliot for Knight's attention. Beast and Laurent are very present as well. We see the not so nice side of Beast, although his actions are motivated by fear for Laurent.

The main secondary character, however, is a ghost. He's the "other man" mentioned in the blurb, and he's a sick fuck. I was so frustrated with Elliot for falling prey to his charms, and even more frustrated with the constant, relentless cruelty he unleashed on Elliot.

This is a fast-paced, intricately plotted story with complex characters. Once I got to 60 percent, I couldn't stop reading.

The sex scenes are dirty and plentiful, and almost always in the most inappropriate times and places. Who gets turned on with blood and guts on their hands? Forget the sweetness; this is all about the brutal, intense fucking.

The gore and betrayal made me sick. Knight and Elliot say some horrible things to each other, and Elliot pays for his mistakes with the most gruesome of punishments.

One thing is certain: My Dark Knight is a creepy take on romance, a fucked-up, sexy thrill ride—an exploration of the human psyche and the ghosts that haunt us all.

I spent my life folded between the pages of books.