ARC Review: How to Save a Life (Howl at the Moon 4) by Eli Easton 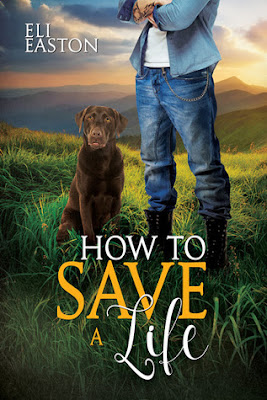 
Rav Miller looked into the terrified, intelligent eyes of the chocolate Labrador on death row, and knew he’d do anything to save him. When the dog, Sammy, escapes and heads to Mad Creek, Rav follows. Mad Creek. The town had become legendary in Rav’s mind after he’d met that bizarre group last year. Rav dismissed his crazy suspicions back then, but when he arrives in Mad Creek, he knows it’s true. Dog shifters exist, and apparently they all live in the California mountains. It’s enough to blow a bad boy’s mind.

Sammy has something in common with Rav—neither one of them trusts people. After Sammy’s abuse as a dog, he particularly dislikes tough-looking men like Rav. But when Sammy gets a chance to work with rescued dogs at the new Mad Creek shelter, his deep compulsion to help others overcomes his fear. Rav and Sammy bond over saving strays. If they can each find the courage to let someone else in, they might find their way to love.

Sheriff Lance Beaufort doesn’t like humans moving into Mad Creek, especially not the tattooed and defiant Rav. When Rav starts a rescue shelter, the town thinks he’s wonderful! But Lance isn’t fooled. He doesn’t buy Rav’s innocent act for one second. How much does Rav know about the quickened? What is his game? And why did he have to show up now, when Lance and the other town leaders are overwhelmed by all the new quickened pouring in?

Rav knows how to save a life. But can he save an entire town? Can he rescue Mad Creek?

This series could have been written only by someone who loves dogs. That loves shines through on every page!

Sammy, a chocolate lab, reminds me of my white lab, Magnum. I am his person, and he would follow me to hell and back. He gives and comforts without asking for anything in return.

Sammy loved his mom, but he couldn't save her. When his mom's sister takes him in, her abusive husband takes out his rage on Sammy. Sammy ends up alone in the snow chained to a tree. The next morning he's in a cage at a kill shelter.

Sammy is smart and more cognizant every day; he knows his clock is ticking.


When Rav, the owner of the dog refuge in Arizon that played a prominent role in book 3, rescues Sammy, Sammy is terrified. Rav is big and has a beard, just like the mean, scary man who hurt Sammy. But Rav's eyes are kind.

Labs are not guard dogs. They are loyal, playful, goofy, and affectionate. Sammy personifies these traits. He has the corniest sense of humor, but Rav would have it no other way.

"How about a new saying? 'When a man is a hero, he deserves to be sexed in the ass.'" Sammy cracked up, like this was the funniest thing.


Sammy is eager to touch and please. While those touches turn Rav on something fierce, Sammy needs time to become a man. This is complicated, because Sammy was neutered as a puppy and initially has a difficult time feeling sexual attraction.

Before Rav was a shelter owner, he was a savvy businessman. He wants to help and has ambitious ideas that would help the town prosper, if only Sheriff Lance would stop being so infuriatingly suspicious and embrace the future.

This series needs to be read in order. You won't feel the spirit of this book if you haven't read about protective (*cough controlling cough cough*) Lance and his ever-patient partner Tim, about ranger Matt and the stoic but sexy Roman, about serious scientist Jason and Milo, who's as sweet as a labradoodle (probably because he is one).

The epilogue really brings the series full circle and provides a HEA not just for Rav and Sammy but for all of Mad Creek and its inhabitants.

Howl at the Moon is an absolutely adorable story filled with humor, friendship, DOGS (including Best Boy!), the coolest parade ever (Rav's doing, with a lot of help from his friends), and an abundance of LOVE.