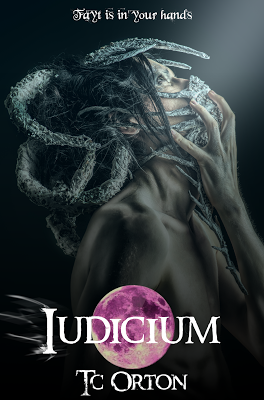 After being incarcerated at a prison that leans over the edge of the world, Fayt must do whatever it takes to escape (or simply survive) the horrors that await him. You will take control of Fayt and guide him on his path, but be careful, for not everyone posing as an ally will lead you down the road to freedom.

Note: This is an interactive story, and it is important that you keep a record of your choices close by.

I know I’ve often said that no two people read the same story but in this case T. C. Orton has taken that to a whole new level. Iudicium is an interactive story so throughout the course of the story the reader has choices to make, choices which will impact what ultimately happens to Fayt, who is the hero of this story.

Now, I could tell you a bit about what happens but truth is, if you read the book, your story could end up having little to possibly no resemblance to the one I read. However, everyone does start out with the same beginning so you will start out on a ship heading for a prison island and from there things can change drastically. I was intrigued to read this book. While I’ve heard of interactive books before I’ve never had the chance to experience one, and this one sounded good. It’s fantasy, and I like fantasy so opportunity knocked, and I ripped that door open.

When you read the instructions at the beginning of the book, it says to keep careful track of your choices…pay heed to this. I thought I was doing this and part way through realized no, I wasn’t even close so I went back and started again. This time I not only tracked my choice but the chapter I was on and the details of every choice; I know it sounds like a lot but truthfully it kept me on track with the story, and it was just so worth doing. The choices made by the reader aren’t excessive but I found that they were enough to keep me really engaged in the story and what was happening. Would I want to do this for every story I read probably not but as an exception and a chance to do something interesting, fun and a little different I really enjoyed it and had a fun time.

‘Iudicium’ is the first book that I’ve read by this author and I really enjoyed his writing style. The world building and character descriptions were well done as was the character development. You will encounter some words that are of the author's creation but if you’ve ever read fantasy than you’ll know that’s pretty much a trademark of the genre. For example Fayt is what is known as a ‘skuld’ and while google will tell you that ‘skuld’ is a word the definition given by google is not the definition that is given in this story. For the purposes of ‘Iudicium’ a skuld is a person of mixed race heritage specifically human and eastern elf (or light elf). I know sometimes this can be disconcerting and even annoying if it’s to extensively done but I didn’t find that was the case at all. In this case the author did this enough to help re-enforce the overtone of fantasy but not nearly enough to have the reader…being me in this instance, frustrated because I didn’t know what half of what I was reading meant. The other thing that I really liked was the fact that while the book is approximately 200 pages long because the readers choices can exclude certain parts of the book it’s not an overly long story which I think would have caused me to become a bit frustrated especially since as I said I’ve never read a story that’s interactive.

Be warned there’s definitely sexual content here and some of it’s definitely non-con. How much sex is in the story is going to depend on the choices you make for Fayt as do many of the other events that happen up to and including the ending for the book which could be anything from an HEA or HFN to a FML (F*ck My Life) after all Fayt’s in your hands.

So if you like fantasy and you’re looking for something a little different grab a copy of ‘Iudicium’ get hold of a pen and some paper and see if you can help Fayt survive his adventure and find his HEA. I have to confess the ending I got for him wasn’t totally an HEA but it definitely wasn’t the worse ending that he could have gotten. So, if you want to have a little different reading experience, let me know what happens to Fayt when you get done; I’d love to hear.

A copy of ‘Iudicium’ was graciously provided by the author in exchange for an honest review.

Additional reviews can be found at:

Born January 6th 1993, T. C. resides in the United Kingdom, living with his partner Peter Jones and their dog, Drake.

T. C. has had a passion for supernatural stories from a young age, often scribbling down his latest ideas instead of focusing on whatever task was at hand during the long school days. At the age of twelve, he penned his first romance story featuring himself and the boy he had feelings for set in a fantastical land full of werewolves and wizards. Ever since that day, T. C. has made it his mission to entwine his leading gay protagonists with epic paranormal adventures.