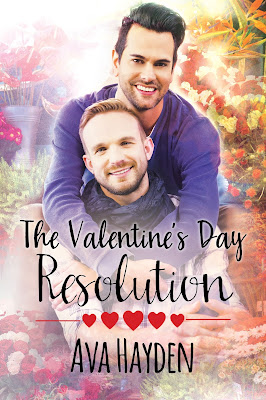 Huxley carries invisible scars from a near-fatal car accident. He sleepwalks through a job at his father’s company, marking time until he can quit and pursue his own dreams. Everything changes the moment he makes eye contact with a stranger while riding to work. It’s as if he’s been shaken out of his stupor, and Huxley vows to find the man.

Thanks to a thieving ex-lover, Paul’s florist shop is on the brink of closing down. He needs to milk Valentine’s Day for all it’s worth—and the irony that a day dedicated to love might help undo the damage of a failed relationship is not lost on him.

When Huxley finds Paul at his shop, both men feel an instant attraction. Before long, they’re falling hard, but Huxley holds back. If Paul knew all the baggage he’s carrying, he might run.

Paul’s gut tells him Huxley is hiding something. Huxley looks like a keeper, but Paul can’t go through another disastrous romance.

When Valentine’s Day arrives, will they have anything to celebrate?

Thanks to My Fiction Nook for hosting me today to talk about The Valentine’s Day Resolution!
Have you ever had the kind of friend who won’t let you get away with anything but who is always there for you? Or the kind of friend whose natural personality is over-the-top and who is unconcerned about anyone else’s opinion in public or in private? Combine all of the above, and you get Carson, Paul’s best friend.
Carson encourages Paul to go after Huxley. He’s a cheerleader and a supporter and later, when things aren’t going so well, Carson is there to offer a sympathetic ear for Paul but also some tough love. Sometimes that’s what we need from our friends—a reality check, not a rubber stamp.

Exclusive excerpt:
Paul pushed back from his desk. If he was going to finish reconciling accounts, he’d need more coffee. He pushed the palms of his hands against his eyes for a moment. I’m so tired. He hated spending time on this sort of basic bookkeeping, but he couldn’t afford to pay his accountant to do routine work he could do.
Sade’s “Cherish the Day” played, and Paul picked up his phone. “What’s up, Carson?”
“Honey, are you still at work?”
Paul suppressed a sigh. “Yep.”
“I was hoping you’d go out tonight.”
“No can do. I’ve got to finish up December bookkeeping.”
Pouty silence.
“Believe me, I’d rather go out, but this has to get done.”
“What about tomorrow night?”
“I’ve actually got plans.” Paul stood and carried the phone over to the kitchenette. He filled a coffeepot with his free hand.
“Plans? Do tell. Is there a man involved?”
Paul laughed. “I’m going to the game tomorrow. That’s all.”
“Alone?”


“No.” He shoved a filter into the basket and knelt to retrieve the bag of coffee from their tiny freezer compartment. They went through coffee so fast he probably didn’t need to, but his parents said it stayed fresher, so he obediently kept it frozen.
“No, and? I’m waiting.”
“A friend offered me a ticket.” Crap. He gave up and put the phone on speaker so he could open the coffee.
“This friend wouldn’t happen to be named Huxley, would he?”
Paul was smiling as he dumped in grounds. “Maybe.”
“Oh my God! It’s a date! And you weren’t even going to tell me? You cad.”
“Put a sock in it, Miss Gordine.”
“Not when there are so many better things to put in it, sweet pea.”

Ava Hayden lives and writes in Alberta, Canada. When not writing, she loves reading yaoi manga and gay romance, baking, seeing plays, hearing live music, and hiking (even though she once came face to face with two grizzlies on a trail). Most of the time her life isn’t that exciting, and that’s fine by her.