A trilogy of romance 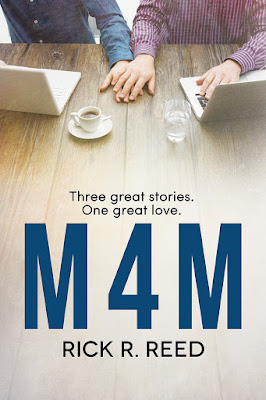 Finding and keeping love can be a challenge in the modern world of blogging, social media, and online dating, as one man will learn in this trilogy.

Poor Ethan Schwartz. At forty-two, he’s alone, his bed is empty, and his HDTV is overworked. He’s tried bars and other places where gay men are supposed to find each other, but it never works out. Maybe he should get a cat?

But his life is about to change…

Poor Ethan. He’s received the most shocking news a gay man can get—he’s HIV positive. Until today his life was perfect, with a job he loves and Brian, who could be “the one.” The one to complete him and fill his lonely life with laughter, hot sex, and romance.

But Ethan’s in for another shock. Could Brian have infected him?

Alone again, Ethan wonders if life is worth living, even with a cat. When an old nemesis sends a Facebook friend request, Ethan is suspicious but intrigued. It seems this old acquaintance has turned his life around, and the changes might hold the key to Ethan getting a new lease on life… and love.

A Guest Post by Rick R. Reed, author of the trilogy of romance, M4M

As a reader of this blog, I assume you’re familiar with gay romance and wonderful authors like ZA Maxfield, Rhys Ford, John Inman, BG Thomas, Mary Calmes, TJ Klune, Amy Lane, and so many others. But do you ever step outside the comfort zone of gay romance to read gay fiction?


If not, or even if you do, I wanted to share with you my top 10 gay fiction favorites. If you want something a bit different, I suggest trying one of the following (these are in no particular order, by the way).


1. Strangers on a Train by Patricia Highsmith. Highsmith has long been one of my literary icons. When it comes to probing the darkest sides of human nature, no one does it better. Strangers on a Train is a much better novel than the Hitchcock movie of the same name (although that was not without its charm, among them the very lovely Farley Granger) and has a much darker resolution. Its homoeroticism, too, is much more explicit than in the sanitized Hollywood film that bears the same name.
2. The Front Runner by Patricia Nell Warren. How many other gay men have had the same experience as I did? I discovered this book on a trip to the mall when I was in high school, surreptitiously bought it when my friend wasn’t looking, and took it home, hid it between my mattress, and box springs…and absolutely treasured it. It opened my eyes to so much (yes, two men can really love each other—it’s not a sickness or an abnormality) and made me realize I was not alone.
3. No Night is Too Long by Ruth Rendell (writing as Barbara Vine). No contemporary mystery/psychological thriller writer does it better than Ruth Rendell. She plays with gay themes in several of her novels, but in this tale of psychological suspense, she most successfully blends homosexual themes and characters with heart-pounding suspense and shines a light on our darkest fears and compulsions.
4. Mysterious Skin by Scott Heim. This was Heim’s debut novel and it’s weird, wonderful, and disturbing, combining alien abduction, memory loss, and child sexual abuse in a compelling, lyrical, and thought-provoking narrative.
5. In a Shallow Grave by James Purdy. Purdy is one of the most underrated American writers. I believe he is one of the masters of 20th century literature and this gem, about a disaffected and disfigured war veteran and his love for a hired male caretaker and the fugitive who comes into both their lives is spiritual, carnal, and profound. And Purdy’s command of the language and his use of American colloquial speech is nothing short of poetry.
6. The Line of Beauty by Alan Hollinghurst. A perfectly rendered portrait of England in the 1980s and the rise of the new right, this story about young gay Nick Guest and his social and sexual awakening is harrowing stuff, since we know that tragedy lurks just around the corner for not only our naïve young—and often selfish—protagonist, but for a whole segment of society.
7. Was by Geoff Ryman. This revisionist take on my favorite movie of all time, The Wizard of Oz, is simply brilliant literature. In its parallel stories of a “real” Dorothy Gale, a “scarecrow” dying of AIDS, and the plight of a child star named Frances Gumm combine to form a story that is nothing short of literary brilliance.
8. Michael Tolliver Lives by Armistead Maupin. The Tales of the City books, like The Front Runner, were eye-openers and touchstones for me as a young gay man coming to grips with his own identity. Reading this last entry in the series really resonated with me and touched me, since I am not far behind Michael himself and have experienced many, if not most, of his same joys and sorrows.
9. The Lost Language of Cranes by David Leavitt. This was Leavitt’s first novel and, while I wouldn’t say it’s his best, I would say it’s his sweetest and most satisfying. So much of the story resonates with me personally (the closeted father with a gay son) that it simply touches my heart more than his other work.
10. IM by Rick R. Reed. You didn’t think I’d compile this list without putting myself on it? But people always ask which of my books is my favorite and this one is clamoring for a mention. I love it because it combines a little romance, with a lot of suspense, some horror, and commentary on gay life and culture.

Rick R. Reed draws inspiration from the lives of gay men to craft stories that quicken the heartbeat, engage emotions, and keep the pages turning. Although he dabbles in horror, dark suspense, and comedy, his attention always returns to the power of love. He’s the award-winning and bestselling author of more than fifty works of published fiction and is forever at work on yet another book. Lambda Literary has called him: “A writer that doesn’t disappoint…”

You can find him at his website or his blog. Rick lives in Palm Springs, CA with his beloved husband and their Boston terrier.