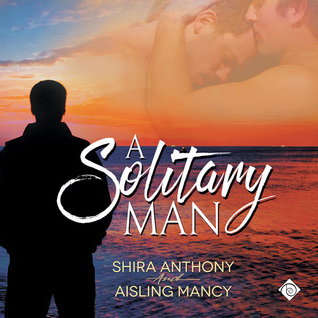 Xavier is a former FBI agent turned deputy sheriff who is hot on the trail of a South American child prostitution ring. Evan is fighting to put an end to rampant cocaine trafficking and chafing under the thumb of an election-hungry boss. When someone tries to kill the eleven-year-old witness who holds the key to both their investigations, they’re forced to work together as they put their lives on the line to protect him. As Chance and Xav collide in the heat of a sweltering North Carolina summer, dodging bullets and chasing bad guys isn’t the only action going on.

Overall I liked the story. Mystery/thriller/suspense type stories are definitely a main staple of my reading diet and 'Solitary Man' had me hooked right from the start. This focus of the action in this story is 'drugs and child trafficking'...not an easy topic at the best of times.

When an undercover case with the FBI goes seriously wrong Xavier 'Xav' Constantine decides it's time for a chance in his life and leaves the FBI to join the Dare's Landing Sheriff's Department. Stopping in Wilmington on his way to his new job he hooks up with Chance for some of the best sex he's ever had...to bad Chance doesn't do repeats and he doesn't mix business with pleasure which leads to one very awkward moment when the next time Chance and Xav meet is at the Dare's Landing Sheriff's Department where Chance shows up in his capacity as the assistant District Attorney and Xav is settling in as the newest member of said sheriff's department.

While I liked this part of the story at times I felt like things were a bit wordier than they needed to be and I have to admit my mind wandered a bit but it was only a couple of times and the story drew me back in and held my interest and there were some really well written parts...one in particular that had me in tears...like serious pass the tissues tears...it wasn't pretty.


Unfortunately the relationship development between Xav and Chance fell a little short for me and I just wasn't feeling the love between these two. Even towards the end of the story when we did finally get more personal interaction between these two the connection just wasn't there for me and in the stories defense the ending really was more of a HFN with the strong promise of an HEA.

'Solitary Man' definitely felt like a mystery/thriller with a secondary theme of romance and usually I'm ok with that as long as the romance works too. Only it didn't it was more of a sorta', kinda', almost thing and just not the sure thing that I wanted.

Jim Pelletier was the narrator for this book and this was also the first time that I've listened to an audio book narrated by him and while I have to admit not all of the voices worked for me, I was definitely impressed with the overall narration of this book. There were a lot of characters in this book which equals a lot of different voices. The fact that the narrator was able to keep them all straight was an accomplishment all on its own. That the voices were distinct and expressed the appropriate emotions while quite often helping to keep me engaged in the events of the story definitely helped as well. I'm definitely curious to listen to some more audio books narrated by this narrator. Just like with authors one can never have to many good narrators to choose from, right?
'Solitary Man' definitely felt like a mystery/thriller with a secondary theme of romance and usually I'm ok with that as long as the romance works too. Only it didn't it was more of a sorta', kinda', almost thing and just not the sure thing that I wanted.

While 'A Solitary Man' is a stand alone novel in truth I'd be happy with one more story one that maybe focuses on building a stronger relationship between Xav and Chance.

An audio book of 'A Solitary Man' was graciously provided by the publisher in exchange for an honest review.