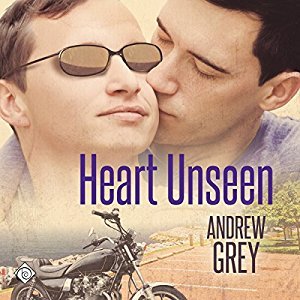 
As a stunningly attractive man and the owner of a successful chain of auto repair garages, Trevor is used to attention, adoration, and getting what he wants. What he wants tends to be passionate, no-strings-attached flings with men he meets in clubs. He doesn't expect anything different when he sets his sights on James. Imagine his surprise when the charm that normally brings men to their knees fails to impress. Trevor will need to drop the routine and connect with James on a meaningful level. He starts by offering to take James home instead of James riding home with his intoxicated friend.

For James, losing his sight at a young age meant limited opportunities for social interaction. Spending most of his time working at a school for the blind has left him unfamiliar with Trevor's world, but James has fought hard for his independence, and he knows what he wants. Right now, that means stepping outside his comfort zone and into Trevor's heart.

Trevor is also open to exploring real love and commitment for a change, but before he can be the man James needs him to be, he'll have to deal with the pain of his past.

Sometimes the heart sees what the eyes don't...

Trevor's an attractive and successful businessman. He's use to getting whatever man he wants. If his bed's empty it's because he wants it that way. He's a player. He does one night stands, hook-ups but not relationships and that's been fine up until now...up until he looks up and across the dance floor of the club where he's out with some friends and sees James. He's drawn to James and thinks he's the most beautiful man he's ever laid eyes on.

Trevor crosses the dance floor to introduce himself and finds himself stumped when he's not met with the usual response to his attentions. Eventually he goes back to his friends feeling more than a little confused only to discover that James wasn't taken with his looks because he couldn't see him...James is blind has been since he was very young. In light of this new information Trevor decides to try again with James.

I really enjoyed this story. I loved how independent James was and his family. I often find that families can be too perfect or to flawed and for me James's family had more balance. His mom drove me a little crazy at times and yet it was clear that she loved her son and really did want the best for him, his sister was awesome and I really enjoyed their relationship. They were close and that was cool...it happens. I loved that she was teaching her son that being blind was just another part of who James was...it didn't make him less or more just different and different, is ok.


James sees the beauty in Trevor...not the physical beauty but his heart. The part of Trevor that is drawn to James and respects him for who he is and wants to spend time with him doing things that are fun and will make James happy.

My only niggle was the dinner with Trevor's family and his dad's neighbor and his new boyfriend...who turned out to be James's douche of an ex...my kingdom for some ice water to pour down that douche's pants. The guy was a jerk and I really would have loved to see a bit of misery come his way...jerk, I tell you the guy was a total unrepentant jerk...sorry...not sorry, it's my inner biotch sneaking out to play.

Admittedly there were some moments that were...shall we say a bit much...ok, cheesy but for me it wasn't enough to really spoil the overall story and I have to admit this was definitely due in part to the fact that I listened to the audio book and it was narrated by Greg Tremblay who as always did an amazing job with the voices for both Trevor and James and the secondary characters we meet along the way. I've very quickly learned that if Greg Tremblay's name is attached to an audiobook I only need to wonder how much I'll enjoy the story not if.

An audio book of 'Heart Unseen' was graciously provided by the publisher in exchange for an honest review.