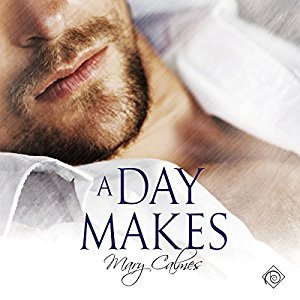 
Mob enforcer Ceaton Mercer has killed a lot of people in a lot of different ways - he stashed the last two bodies in a toolshed belonging to a sweetheart marine researcher in an idyllic island community - but he's really not such a bad guy. Over time he's found a home of sorts, and he even learns he's found a place in the hearts of the people he works with...at least enough so that they won't put a bullet in his head because he's outlived his usefulness to the boss.

But he never thought he'd find one day could change his life, and he's about to discover how wrong he is.

Because in a single day, he meets the man who looks to be the one, the love of his life. It's an improbable idea - a man who deals in death finding love - but it's like it's meant to be. That single day gets weirder and troubles pile up, forcing Ceaton to take a hard look at his dreary life and accept that one day can change everything, especially himself. His future might be brighter than he expects - if he can stay alive long enough to find out.

It was an audio book written by Mary Calmes and narrated by Greg Tremblay...so no surprises at all I wanted it and it was awesome.

I read this book when it was released back in April of this year and I loved it...5 stars worth, that hasn't changed and has become my habit I'm not going to waste time re-writing what I've already written, so here's the link to my original review...
Original Review: A Day Makes by Mary Calmes

The only change here is the addition of Greg Tremblay's voice as the narrator and as seems to have become the norm, Mr. Tremblay nailed it.


I'm pretty sure that Greg Tremblay could read the phone book and make it sound amazingly interesting. His voices are smooth, effortless and natural. They're unique and express emotion drawing the listener into the story...getting and holding their interest.

I have no doubt that he works hard at his craft and the end result from Mr. Tremblay's efforts is an incredibly enjoyable audio book that I as a listener can listen to and enjoy not just once but numerous times.

An audio book of 'A Day Makes' was graciously provided by the publisher in exchange for an honest review.