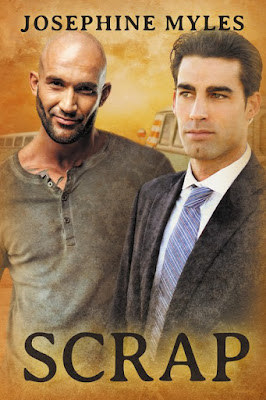 In a battle of the alpha males, who will end up on top?

On the surface, Derek “Call me Dare” Nelson’s life is simple. He’s happy doing up campervans while living in a slightly illegal caravan in his riverfront yard. But life gets more complicated when a smooth-talking, handsome property developer offers to buy the land out from under his feet—the very same man Dare had to escort from a party nine months ago for causing a drunken scene.

Grant Matravers is living a double life, attempting to adjust to weekends as a single, soon-to-be-divorced gay man while staying in the closet during the week. The strain of keeping up appearances at work while missing his kids is bad enough, but add in an attraction to the shaven-headed, tattooed, totally unsuitable Dare and Grant finds his emotional barriers wearing dangerously thin.

Dare blasts through those barriers in a way Grant isn’t prepared for, challenging everything he thought he knew about himself as a gay man. But as their chemistry heats up and the intimacy between them grows, Grant edges towards a decision that could blow up in his face. Exposing a mess of complications that could destroy any chance for their happily ever after.

Product Warnings: Contains one sharp-suited man desperately in need of redemption, another whose thuggish exterior does a pretty good job of hiding his heart of gold, frotting in camper vans, a sensual head-shaving scene and several (noisy) guest appearances from Mas.

English through and through, Josephine Myles is addicted to tea and busy cultivating a reputation for eccentricity. She writes gay erotica and romance, but finds the erotica keeps cuddling up to the romance, and the romance keeps corrupting the erotica. Jo blames her rebellious muse but he never listens to her anyway, no matter how much she threatens him with a big stick. She’s beginning to suspect he enjoys it.

Jo’s novel Stuff won the 2014 Rainbow Award for Best Bisexual Romance, and her novella Merry Gentlemen won the 2014 Rainbow Award for Best Gay Romantic Comedy. She loves to be busy, and is currently having fun trying to work out how she is going to fit in her love of writing, dressmaking and attending cabaret shows in fabulous clothing around the demands of a preteen with special needs and an incessantly curious toddler.