Blogtour and ARC Review: Back To You by Chris Scully

Hello! I’m Chris Scully. I’m thrilled to welcome you to my blog tour for Back to You, my new romantic suspense novel. Join me at various tour stops, where I’ll be sharing some background on the novel and the characters, my thoughts on writing, and more. Comment on each stop to be entered in a drawing for a $20 Riptide gift certificate. Thanks for joining me on the tour! 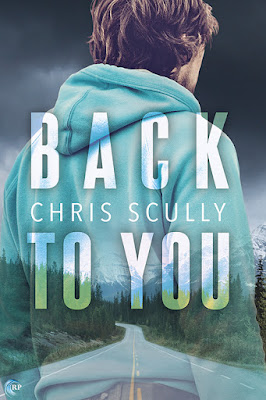 Journalist Alex Buchanan has come home to the remote British Columbia town he grew up in, but only because his estranged father is dying. For Alex, the homecoming holds a mix of memories, mostly bad. The only bright spot is reconnecting with Benji Morning, the childhood friend he never truly forgot. As boys, the strength of their bond had frightened Alex. But now that he’s confident in his bisexuality, he’s drawn back to quiet, soft-spoken Ben.

Ben isn’t the same boy Alex left behind, though. His life has been overshadowed by the disappearance of his sister two decades earlier, and now a new break in the case threatens to undo the peace he’s worked so hard to attain.

As Alex struggles to repair the relationship with his father before it’s too late, he finds himself caught up in a twenty-year-old mystery, a story he never expected, and a shocking truth that could affect his and Ben’s future together.

There's a melancholy undertone to this book, and it permeates everything that happens within. Set in a small town along the Canadian Highway of Tears, a stretch of road where women and young girl mysteriously disappeared over a period of about 40 years, there's a certain kind of dread that sits in the pit of your stomach from the get-go.

Alex/Alexander/Sandy Buchanan, a journalist, returns to the town where he grew up after leaving with his mother 20 years earlier upon his parents divorce. He returns, reluctantly, because his estranged father's drinking has finally caught up with him and the old man is expected to die soon. Alex has no expectations of a happy reunion as he still resents his father, but hopes to get a story out of his visit.

The story is told entirely from Alex's first-person POV, which naturally lets the reader see only what Alex chooses to see. We don't get a whole lot of insight to Ben or what makes him tick, except of what we're allowed to see through Alex somewhat self-absorbed eyes. There's a moment when Ben lays it all out, and Alex finally... well, you read this for yourself.

Alex's older sister Janet lives close by, having returned to be closer to their father some years ago, and their relationship is equally strained, with Janet blaming Alex for never even trying to have a relationship with his father after the divorce, and Alex resenting Janet for continuing to ask him to. Their relationship is complex, and it was clear from the start that Janet was troubled.

The only thing that Alex looks forward to as he drives up to the small town is seeing his childhood friend Ben/Benji Morning, who's now an artist. Back when they were in their early teens, Alex had strong feelings for Benji that confused and scared him, and when Alex and his mom moved away, he quickly forgot all about Benji. In the years since, he's never been able to recapture the feelings from their one innocent kiss, not in the one-night-stands, the failed relationships, or even his relatively short marriage.

Additionally, shortly before Alex's mother left with him and his sister, Benji's older sister Misty mysteriously vanished one day. Alex's father was the last one to talk to her, and Alex and Benji observed her car driving down the highway the day she disappeared. She's never been found, and her and Benji's mother has never stopped looking, obsessed with finding out what happened to her daughter. In all those years, she's never had any emotional energy left for Ben, and he basically had to raise himself after his sister's disappearance. Now living in a small studio above the garage, Benji has worked hard to find a bit of peace while still keeping an eye on his mother, a peace that is threatened by Alex showing up on his doorstep. He's teaching free art classes to special needs kids and others, and has carved out a quiet albeit lonely existence for himself. He longs to move on, but realizes that his mother will continue to stagnate in her quest for finding his sister.

Just about the time Alex arrives in town, Misty's car is found in a nearby lake on the outskirts of town, and the investigation is given a second wind.

The mystery about what happened to Misty is deeply intertwined with Alex's relationship with his father and sister, and basically drives the story. The romance and rekindled feelings between Alex and Ben take second place, really, and theirs is not an easy road.

The book is full of poignant moments, but it's more suspenseful mystery than romance. Alex learns that what he believes to be the truth might not be after all, and that the dying man in the hospital bed has perhaps similar trouble in expressing his feelings, and that Alex is his father's son after all.

The truth about Misty's disappearance does eventually come out, though it wasn't a huge surprise to me. There were hints along the way, in what people said, hints that Alex either didn't understand or was too busy avoiding. Truth is a double-edged sword, as Alex surely finds out.

This isn't an easy read, and with the focus not on the second-chance romance but the mystery and suspense, it's not a book that would appeal to readers who look for fluffy M/M romances. They'd miss out, of course, as this book showcases this author's exquisite ability to set the stage and draw images with her words, transporting the reader into the story and giving him or her a unique experience. The writing is exceptional in creating the perfect atmosphere and evoking just the right emotions while reading. As with Until September, the author also doesn't shy away from making statements about the social issues behind the Highway of Tears.

I was fascinated from the start and couldn't stop reading until the very end. A true page-turner, this book delivered on everything it promised and more.

Chris Scully lives in Toronto, Canada. She grew up spinning romantic stories in her head and always dreamed of one day being a writer even though life had other plans. Her characters have accompanied her through career turns as a librarian and an IT professional, until finally, to escape the tedium of a corporate day job, she took a chance and began putting her daydreams down on paper.

Tired of the same old boy-meets-girl stories, she found a home in M/M romance and strives to give her characters the happy endings they deserve. She divides her time between a mundane 9-5 cubicle job and a much more interesting fantasy life. When she’s not working or writing (which isn’t often these days) she loves puttering in the garden and traveling. She is an avid reader and tries to bring pieces of other genres and styles to her stories. While her head is crammed full of all the things she’d like to try writing, her focus is always on the characters first. She describes her characters as authentic, ordinary people—the kind of guy you might meet on the street, or the one who might be your best friend.

Although keeping up with social media is still a struggle given her schedule, she does love to hear from readers.

To celebrate the release of Back to You, one lucky winner will receive a $20 Riptide credit! Leave a comment with your contact info to enter the contest. Entries close at midnight, Eastern time, on June 17, 2017. Contest is NOT restricted to U.S. entries. Thanks for following the tour, and don’t forget to leave your contact info!