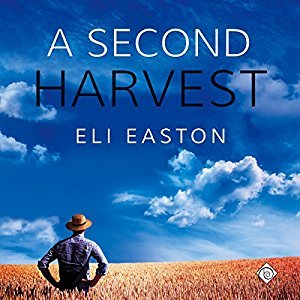 David Fisher has lived by the rules all his life. Born to a Mennonite family, he obeyed his father and took over the family farm, married, and had two children. Now with both his kids in college and his wife deceased, he runs his farm alone and without joy, counting off the days of a life half-lived.

Christie Landon, graphic designer, Manhattanite, and fierce gay party boy, needs a change. Now thirty, he figures it's time to grow up and think about his future. When his best friend overdoses, Christie resolves to take a break from the city. He heads to a small house in Lancaster County, Pennsylvania, to rest, recoup, and reflect.

But life in the country is boring despite glimpses of the hunky silver fox next door. When Christie's creativity latches on to cooking, he decides to approach his widower neighbor with a plan to share meals and grocery expenses. David agrees, and soon the odd couple finds they really enjoy spending time together.

Christie challenges the boundaries of David's closed world and brings out feelings he buried long ago. If he can break free of the past, he might find a second chance at happiness.

David Fisher's lived his life according to everyone else's dictates. His father and then a wife and two kids, following the beliefs of the Mennonite church. But now his wife's passed away, his kids are grown and off at school and David's all but turned away from the church. David finds himself really just going through the motions of running the family farm.  Every days basically the same until the day he meets his new neighbor, Christie Landon.

Christie's escaped the city after leading life in the fast lane for years. A friend's close call when he overdoses causes Christie to re-evaluate his life and head for the country where he plans to sort out things at his aunt's house that he's inherited upon her death. Christie's looking to slow down, regroup and re-evaluate his life until he meets his new neighbor, David.

David and Christie are total opposites on the surface. David's closeted. He's lived his life in Lancaster County never travelling anywhere or seeing anything of the world. He's dreamed of if...his collection of National Geographic magazines can attest to that. At 40 years old not only does it seem like his life is over...it never really got a chance to start. While at 30 years old, Christie's a college graduate, he's got a solid career as a graphic designer, he's partied, walked on the wild side, seen a bit of the world and reached a point where he just wants to put the brakes on.

I liked the slow burn on this one. Seeing David and Christie build their relationship over food and farm work. Watching as Christie slowly draws out David's awakening sexuality until David neither can nor wants to deny it.

I really liked both David and Christie. David for me was someone who was thoughtful,  strong and honorable. He stuck by his convictions regardless of how hard it was...when he was confronted by members of the church or his own children he didn't automatically do the easy thing and capitulate to what they wanted. While Christie was out and proud he was also a kind, caring and compassionate person.

"A Second Harvest" had all the makings of an incredibly good story and while I enjoyed it.  It didn't make the same connection for me that other books by this author have. I'm honestly not entirely sure why this one didn't totally work for my but I do think at least part of that was due to the narration. I was fortunate to be able to listen to the audio book for 'A Second Harvest' which was narrated by Will Tulin, who is a new to me narrator and unfortunately for me this narrator just didn't quite work. His voices for the characters weren't the same as how I had imagined they would sound and I found this to be a bit distracting. While he did check off my basic checklist of 'what I look for' in an audio book, the voices just didn't work for me. So I have to caution that this is a very subjective opinion being expressed here.

"A Second Harvest" is a story not just of two men discovering each other but themselves. Other than my issue with the audio, I'm not sure why this one didn't work for me...maybe it wasn't quite the type of story I was looking for at the time...who knows sometimes things work, sometimes they don't and this time was just ok and not 'howl at the moon awesome'.

An audiobook of "A Second Harvest" was graciously provided by the publisher in exchange for an honest review.