Audiobook Review: A Kind of Honesty by Lane Hayes 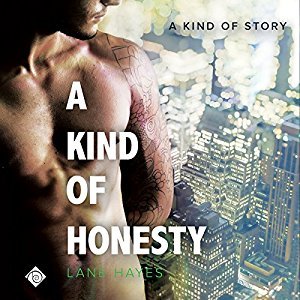 Music is drummer Tim Chalmers’s great escape and the one thing that’s never let him down. But his band Spiral’s meteoric rise to fame has made it difficult for him to maintain a low profile. Unwanted press pesters him after a public breakup with a volatile ex-girlfriend who loves the limelight as much as he loathes it. Tim’s main goal is to avoid confrontation. However, when a handsome stranger in a dive bar turns out to be someone he might know, everything changes.

Carter Hamilton-Temple might be a successful financial consultant with more brains, sophistication, and charm than most, but he always falls for the wrong guys: closet cases or men with issues. He can’t fight his attraction to tattooed rock star Tim, but can he trust his own judgment? When the thrill of danger combined with a fierce physical connection proves too strong for either man to resist, a quiet liaison away from the public eye and curious friends seems like a safe bet. But some secrets are hard to keep. When rumors threaten to rock his world, Tim realizes it’s time to confront his fear with his own kind of honesty.

A Kind of Honesty was definitely more than...kind of good.

I'm pretty sure that I've already mentioned this but just to refresh things. Rock star stories really are not at the top of my list to read. I don't know why they just never seem to appeal to me...however, as we all know one should 'never say never' because there are exceptions to every rule and the 'A Kind of stories' by Lane Hayes are among those exceptions for me.

Not only are the stories contained in this series beyond good but for me Seth Clayton is the perfect narrator for them.

Tim is the drummer for the rock band Spiral, which this series centers around. While he's been in each book we've really learned very little about him until now. We know he's the drummer and we know he's bisexual and  really that's about all we've learned until now. But 'A Kind of Honesty' changes all that we learn all Tim's secrets with this story and there are a few.

Carter Hamilton-Temple is a successful financial consultant and a very rich man in his own right. He's also Zeke Gulden's best friend. We met Zeke in previous stories and learned all about Zeke in 'A Kind of Romance'. Carter may have money and the smarts to make money for his clients but what he doesn't seem to have is much luck when it comes to men.  He's had his heart and his trust broken more than once and as luck would have it the men who have done this turned out to be bi, so needless to say when Carter and Tim get together, Tim's already got one strike against him.


When Tim finally ends his relationship with his super-model from hell girlfriend. He decides it's time to explore the other side of his bisexuality and takes himself to a less than glamours gay bar with the intentions of getting laid and as fortune would have it, just about the time he's decided he picked the wrong place to put his plan into action in walks one of the hottest men Tim's set eyes on in a while. Luckily for him that man likes what the sees when he sets eyes on Tim. Mission accomplished after a couple of drinks they head out to a dive hotel and get their groove on. These two men are seriously hot together. They like their sex down and dirty...maybe not quite as dirty as their present surroundings though...

The real surprise comes for both of these men when they are once again brought face to face at a birthday party for a mutual friend. But it's no surprise when both men decide that they want to continue what started in that seedy L.A. hotel room...more down and dirty sex without the strings and hopefully cleaner surroundings.

As they explore their mutual attraction those strings just seem to add themselves. Both Tim and Carter start to find their happiness getting tied to one another and things become complicated pushing each man to his limits, until things explode and Tim is left alone with the realization that if he wants to keep what he's found with Carter, he needs to make some changes sooner than he thinks he's ready to.

I would have to say that when it comes to 'rock star' books this series is definitely at the top of my favorites list. Quite often if I read books that involve the music industry the MCs tend to be country & western performers, which is pretty ironic considering that I'm not really a C&W fan. I've read a couple other rock star series and one or two standalones that I enjoyed but honestly along with the 'Sinners' series by Rhys Ford, this is definitely my other top choice.

My point being simply put Lane Hayes has done what only a very few authors have accomplished and that's to get me to not only read but thoroughly enjoy and look forward to a rock star series. In the scheme of things not really a big deal to anyone other than me. But from my perspective ...well, quite honestly I'm more than a little impressed.

Add to this the fact that somebody somewhere had the wisdom or just plain good luck to utilize the talents of Seth Clayton for the audio books and  this series for me has been a huge success.

Listening to Seth Clayton narrate an audio book is a bit of a different experience than  I've come to expect from most narrators. I'm not sure that he really ticks my 'basic audio book' checklist. Although I have no problem in terms of knowing who's speaking and his voices are definitely expressive and consistent...ok, let's just say he hits the mark on these things for me and move on to what really appeals to me...which seems to be his voice in general. There's a comfortable tone to it no matter what character he's portraying. It feels like I'm curled up with a cup of coffee and a good friend who's telling me their story...it's comfortable and inviting.  I just really like his voice and no, it's not in that 'ohmygod, he sounds so hot' way although he does the sexy thing just fine as well.

One of my biggest issues with audiobooks was the fear that my inner 12 year old would run amuck during those intimate moments in a story and spoil things for me and while it has happened on occasion not once during any of these books did that little brat make an appearance and if it was going to happen this would have been the story...because hello!...dirty talk here, in abundance. But if it's done right it's howt!!! hella', hella' hot!!! and if not well...it's just a giggle fest waiting to happen...trust me there were no giggles to be found here, at least not from me. I was too busy fanning myself.

If you're like me and rock star stories aren't really your thing all I can say is check this series out, I think you'll be pleasantly surprised and if you like rock star stories you seriously need these books. These guys are all awesome and hot or maybe they're just awesomely hot...whatever, it works.

Sadly for now I'm 'kind of' out of audio books from this series but book 4 is coming soon and with any luck the audio book will follow without too much delay and Seth Clayton will still be the narrator...sorry, I don't want much...I just want it all.

An audiobook for 'A Kind of Honesty' was graciously provided by the publisher in exchange for an honest review.