ARC Review: A Kind of Home (A Kind of Story 4) by Lane Hayes 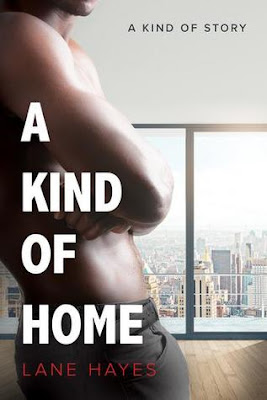 
Isaac Dalton is the guitarist for Spiral, arguably the biggest rock band in the world. The band’s meteoric rise to superstardom has its perks, but fame and fortune aren’t all they’re cracked up to be. Nonstop touring and performing exhaust him, and when an overzealous fan makes it imperative that Isaac travel with a clingy bodyguard, he is ready for a break from the madness. More so when his newly single first crush shows up on his doorstep. The man is strictly off-limits. He’s a memory from a place Isaac would rather leave behind. And he’s straight.

Fun-loving former athlete slash construction worker Adam McBride desperately needs a new beginning. And New York City is the perfect place to start over and think about how to rebuild his life. A short stint as roommates with his brother’s best friend from high school seems like a mutually beneficial arrangement. However, when friendship gives way to fierce attraction, both men find themselves in unchartered and possibly dangerous territory. Isaac has to decide if he’s willing to take the ultimate risk for a kind of love and a kind of home he never dreamed possible.

The A Kind of series is kind of special. I've been following Spiral from the very beginning when the guys traveled to New York to make it big. Isaac is Spiral's guitarist, the one who took over for Will.

Isaac has always been all about the music. He doesn't care for fame; he just wants to play and belong. All the guys in the band have someone, but Isaac doesn't let go easily. Following his parents' abandonment and drama, Isaac left his small home town and never looked back.

Then Adam moved in. And when Isaac returns from tour, Adam, all 6 feet something of him, is still there, his red Converse under the coffee table, his stuff strewn around Isaac's space.

Adam, Isaac's childhood crush, is newly divorced and has come to New York to find himself. There's more to the story, of course, but Adam gives up the full truth in bits and pieces.

I loved Isaac and Adam together. They had a strong friendship and knew how to be there for each other. Adam grounds Isaac, and Isaac offers Adam the passion and support he needs. Adam knows what went wrong in his last relationship and doesn't want to make the same mistakes with Isaac.

This is a steamy story with plenty of romance and sweet moments. Adam and Isaac baking together? Gah, that was seriously adorable.

Even as Adam and Isaac grow closer, Isaac is being stalked by his "biggest fan." Said fan posts creepy messages on Spiral's social media accounts, sends flowers, and sneaks into Isaac's apartment (or so Isaac suspects).

The stalker plot has been done before, but it's handled fairly well here. Lane Hayes doesn't do melodrama. The villain isn't really evil, just obsessive and lost. Most readers will figure out the mystery early on, but keeping the audience in suspense is not the point of the story.

When he has nowhere to go, Isaac finds Adam—Adam, with his goofy smile; Adam, who bakes cookies; Adam, who yearns for something real and permanent . . . Isaac can't help but fall.

This was a solid 5 star read for me until the last few chapters. Once the stalker mystery was resolved, the story lost momentum. Isaac pushes Adam away, and Adam just goes.

But these men are magnets drawn together; they find their own kind of home.

P.S. This book can be read as a standalone, but I really loved visiting, however briefly, with the other three couples in the series.

Finishing a good book is like leaving a good friend.

An ARC of this book was provided by the publisher in exchange for an honest review. Download links are provided as a courtesy and do not constitute an endorsement of or affiliation with the book, author, publisher, or website listed.
Posted by Dani(ela) at 9:00 AM