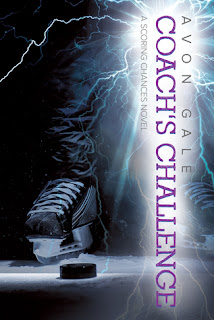 It’s been decades since blackmail forced Troy Callahan to retire from playing professional hockey, and he’s built a successful career behind the bench. When he’s offered the opportunity to coach the Asheville Ravens—the most hated team in the ECHL—he’s convinced that his no-nonsense attitude is just what the team needs to put their focus back on hockey. But Troy is disheartened when he finds out the Ravens have signed Shane North, a player known for his aggression—especially when Shane’s rough good looks have Troy thinking inappropriate thoughts about a player, even if he’s set to retire at the end of the season.

Shane’s career in the majors never quite took off. Wanting to quit on his own terms, Shane agrees to a one-year contract with the Ravens and finds himself playing for a coach who thinks he’s an aging goon, and with a team that doesn’t trust him, Troy, or each other. Despite his determination not to get involved, Shane unwillingly becomes part of the team… and is just as unwillingly drawn to the gruff, out-and-proud coach. As the Ravens struggle to build a new identity, Shane and Troy succumb to the passion that might cost them everything.

I am a devoted fan of the Scoring Chances series and really enjoyed this sexy, low angst story. But I didn't LOVE it like I loved books 3 (Misha and Max made me swoon) and 4 (Isaac and Laurent slayed me).

Shane and Troy are pretty fucking awesome, but they are all sex and jibes, aggression and dirty talk. This story lacked the tenderness, the sweetness, the ROMANCE.

Troy, out and proud, is the new coach of the much despised Ravens. Shane is a good but not amazing player who accepted a position with the Ravens to leave hockey on his own terms. Shane always had "potential" but never quite made it.

Troy thinks Shane is a punk and isn't too eager to have him on the team. It doesn't help that Shane shows up late to his first day of practice and Troy comes down hard on his ass. *ahem*

My favorite things about this book:

→ MCs from last two books (Isaac gets a bit of page time, and he's as cocky as ever.)
→ Troy's friend Gabe, who also happens to be the Ravens' general manager
→ New set of hawt hockey players who come alive once they have a coach who actually lets them talk in the locker room
→ Cute twink bartender RIVER (He has a boyfriend, but I'm not giving up on River quite yet.)
→ Team captain Xavier Matthews, our Southern gent who is surely getting his own book next

- Very nice HEA (The ending isn't all hearts and roses, but Shane and Troy aren't hearts and roses kind of guys. I have no doubt these two belong together, arguments and all, and will make it work.)

- Shane's "brawl" with Hux, Isaac's friend from the fourth book—Isaac is such an instigator.

All in all, Coach’s Challenge is a pretty great addition to this infuckingcredible series.