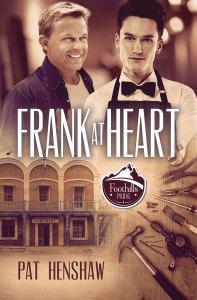 Everything about thirty-five-year-old Stone Acres hardware store owner Frank McCord is old-fashioned—from his bow tie and overalls to the way he happily makes house calls to his dreams of lasting romance, true love, and marriage. Frank’s predecessors have run the store and been mainstays in the small California town for over a century. While genial Frank upholds tradition and earns the respect of friends and neighbors, he fears he’s too dull and old to attract a husband.

Into his life comes handsome thirty-six-year-old electronic games designer Christopher Darling and his fifteen-year-old son, Henry. Christopher has everything Frank could want in a potential partner: charm, kindness, and compatibility. Also, he’s a terrific father to Henry. When their Stone Acres home turns out to be uninhabitable, Frank offers the Darlings temporary lodging in his ancestral farmhouse, where he and his tenant Emil reside. Since Emil thinks Frank is his, sparks fly. Suddenly, Frank’s monotonous life promises to explode with love and threatens to change him forever.

I picked up the box and studied it. He’d done a remarkable job in so little time. He’d even used the flush piano hinges instead of the more cumbersome butt hinge, even though the directions didn’t specify which would be better for the project. His box opened and closed easily, and the corners made perfect ninety-degree angles.
I started to put the box down, but Christopher reached for it. I passed it over and watched a moment as he held it up, a look of awe on his face.
“Henry, this is—” he started, but his son stopped him.
“Dad, I’m taking a test here.”
With a sheepish grin and an amused side-glance at me, Christopher put the box down, said a short “Sorry,” and returned to the front of the store.
Again, I hid my amusement at how well they interacted and shelved my amazement at how Christopher had shared the moment with me. I ran my hand over the top of the box. This one I’d keep.
As I was about to find out when Henry could start work, the bell tinkled. I looked over my shoulder to see a newcomer hurry in. His sneakers squeaked on the wood floor.
“Hi. You the owner?” he greeted me.
I looked around for Riley but couldn’t see him anywhere. Had he called it a day and gone home? I wouldn’t blame him. Except for the Darlings, it’d been slow.
When I nodded at the customer, he launched into a fairly typical request. He and his wife had bought some Ikea furniture, and now he couldn’t put it together. I told him what I told everyone, to bring it into the shop and we’d assemble it for him.
Then I told him the setup fee, said it would take a week or so, and took down his name and contact information as he started to thank me. After I told him the store was actually closing right now, he left reluctantly, looking at the merchandise around him as he shuffled to the door. This time I locked it and put out the Closed sign. Christopher had said he wanted me to visit the Adams-Scott House this afternoon, but first I had to hire Henry officially.
“So, Henry, when would you like to start?”
He was staring at the door and the escaping customer. I had to ask the question twice.
“Who puts together the Ikea stuff?” Henry responded instead of giving me a date.
“Riley and I do. When we get a chance. We do it between other things. Why?” The truth was we both hated assembling the furniture because it was tedious.
“May I do it?” The eagerness in his question caught me off guard.
“You want to put together Ikea furniture?” He didn’t mean it, did he?
“Yeah. Cool. I love Ikea!” Henry beamed at me as if to ask “Doesn’t everyone?” 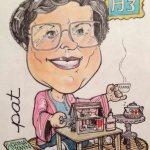 Now retired, Pat, author of the Foothills Pride Stories, was born and raised in Nebraska and promptly left the cold and snow after college, living at various times in Texas, Colorado, Northern Virginia, and now Sacramento, California. Pat has found joy in visiting Mexico, Canada, Europe, Nicaragua, Thailand, and Egypt, and relishes trips to Stowe, Vermont, to see family.

Two of her fondest memories include touching time when she put her hands on the pyramids and experiencing pure whimsy when she interviewed Caroll Spinney (Big Bird and Oscar the Grouch). Her triumphs are raising two incredible daughters who daily amaze her with their power and compassion. Her supportive husband keeps her grounded in reality when she threatens to drift away while writing fiction.