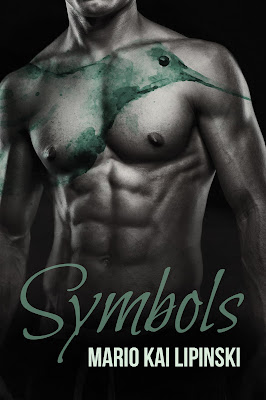 Violence is hard to escape because of the scars it leaves—on the body, the mind, and the heart.

Small, skinny, and timid, Matt is the school’s punching bag. He suffers in silence and holds no hope anyone will come to his aid. The last thing on his mind is finding someone special. He’s sure it’s impossible, so why bother trying?

Shane is no stranger to pain. At his old school, he broke a football player’s arms for tormenting his friend, and with his size and multiple tattoos, he looks every bit the thug everyone—Matt included—assumes he is.

Building trust isn’t easy, but a sweet yet passionate romance slowly unfolds. Their road isn’t without bumps, but Matt and Shane navigate them together, finding happiness and security in each other—until another act of violence and its aftermath threatens to tear their lives—and their love—apart once and for all. But like the symbols etched into Shane’s skin, some things are made to last.

I’m very excited to get the chance of presenting my upcoming book ‘Symbols’ for the wonderful people at My Fiction Nook. In this guest blog post, I share some of my thoughts on ‘Gentle Giants’ with you, and I’m eager to hear what you have to say about this topic. Enjoy!

If there’s one trope that will make me fall head over heels for a book or a movie, it’s the ‘Gentle Giant’—a powerful person, animal, or, let’s be generous, entity who’s meek and maybe even helps others with these powers.
I rummaged through my age-battered mind to recall the first time I stumbled over this concept, and I think it was Aesop’s fable ‘The Lion and the Mouse,’ read to me in elementary school by the most wonderful teacher (thank you, Mrs. Weiss). The story goes like this: a lion spares a mouse which later saves the lion’s life by gnawing through the ropes used to shackle the lion. Granted: strictly speaking the lion isn’t a gentle giant because it threatens the mouse first and only lets the rodent go because it deems the tiny thing an unworthy prey. Moreover, the moral of the story is that even the smallest person might safe the strongest one. Yet the thing that resonated with little Mario the most was that the lion spared the mouse though it didn’t have to.
Some—cough—many years later I had a similar experience with Disney’s Beauty and the Beast, the animated version from 1991. The hideous creature, rough on the outside but a soft romantic on the inside, made me go to the theaters four times within two weeks. When the cinemas finally cancelled the movie, I put aside fifty (Deutsch-) marks and counted the days for the VHS cassette to come out. For the young hatchlings among you: a VHS cassette is a black, clunky, rectangular box with gruesome picture and sound quality, and you had to rewind those things when you wanted to watch the movie again… You see how desperate I was to see Belle and the Beast again. Needless to say, I bought the movie on DVD and Blu-ray as soon as it was available.
The idea of the gentle giant resonates so strongly with me that most of my stories have one in them. To be frank, before writing this post I have never asked myself why. The short answer is hope. The hope that these giants exist for real.
‘With great power comes great responsibility’ is a quote which can be traced back to the French Revolution—or more recently Spider-Man. These are wise words, true, but let’s be honest: not too many people heed them.
‘Power corrupts, and absolute power corrupts absolutely’ is another quote, and unfortunately it describes reality much better than the first one.
Yet I hope that it doesn’t require superpowers to resist the lure of corruption. That there are actually people out there, strong and powerful in their own way, who live up to the responsibility, who are gentle giants. And I’m not hoping in vain. Every news story about a fireman rescuing a kitten or a high school quarterback standing up for an LGBT+ fellow student proves me right. It doesn’t take much to use your own strength and fuel this hope.
This is the other reason why I keep adding these characters to my tales: inspiration. Sometimes all it takes is a little nudge to do the right thing. Maybe one of my characters helps people to unleash their own inner gentle giants or at the very least keeps their own hope burning.
Shane, one of the main characters in my story ‘Symbols,’ is the prototype of a gentle giant: a six-foot-eight bodybuilder, scarred and inked, yet a born defender. Not even being punished for saving his best friend makes him doubt his actions because helping others is one of the things that define him.

Matt, the other main character, seems to be the downright opposite of Shane: a timid, fragile, and small boy, frightened by his own shadow. But meeting Shane transforms Matt. It is Shane who at one point in the story notices that Matt is the stronger of the two.
You don’t have to be a real giant with slabs of muscles like Shane to be powerful. Even the Matts (or especially the Matts) can use their unique abilities to help others. I’m a Matt, and I can do it.
I don’t know whether you’re a Matt or a Shane—just be a gentle giant.
Because if you are, ’Symbols’ is dedicated to you:

To all the gentle giants who make this world a better place.

Do you have your own favorite gentle giant from a book or a movie? Have you met one for real? Have you already been another person’s gentle giant?
Share with us here in the comments or contact me via Facebook.

Mario Kai Lipinski lives in Herne, Germany. He is a spare-time author, and his evil day job, teaching mathematics at university level, isn’t that evil after all. Granted, on some days he wants to strangle his students, but it only takes a coffee or two and he remembers how much he loves them. He loves nerdy science stuff too. Does it show in his books? Of course it does.

English is not his native language, and he frequently gets asked why he writes in English. The answer has two parts. Firstly, he has slightly masochistic tendencies. Secondly, most books he reads are in English. So it feels only natural to write in this language too. English is beautiful—until it isn’t. Never, absolutely never, get him started on comma rules.

One reader described his books as “sexually explicit Disney movies.” That hits the nail on the head. Mario is into romance with a capital R and loves his cheesy. He is so good at channeling his inner teenager that sometimes he doubts he even has an inner adult.