Life can be very frustrating when even dragons fail to live up to your expectations.

At least, that’s how my hero, Raif, feels for most of the course of Recovery. Raif, you see, has very firm ideas about how the world should be. Virtue should be rewarded, truth should triumph over lies, and dragons should be mighty, gracious, and proud.

They certainly shouldn’t be flirting with him.

Unfortunately for Raif, the real dragon he’s vowed to follow is much more complicated than his expectations. Ancient legends may claim that Arden was a fierce and powerful warlord, but once he’s shifted into human form, he seems far too busy teasing and flirting with everyone they meet to inspire awe in anyone.

To make matters worse, their quest leads them to the city of Aliann, the richest city in the world, and throws them deep into a political power struggle where more than one ancient spirit is meddling and manipulating the humans involved. Aliann is a city of masks and secrets, and Raif has to start looking beyond the surface if he is to understand, and ultimately save, the city.

Expectations haunt us all. It’s hard to get away from them in the real world—whether it’s the airbrushed images of perfect bodies and idealised relationships bombarding us from every advert, or the more subtle distortion of carefully curated lives that we see on social media. I work with teenagers and my colleagues and I are all acutely aware of the huge risk in anxiety in even very young children. Every artist and writer I know has had at least one bout with imposter syndrome. There’s a constant pressure on us all to do better, try harder, to go beyond our limits. At its best, it can inspire, but too often, it is more destructive than inspirational.

I wanted to take that into my fantasy world. Raif is the first human and mortal protagonist I’ve had in this series. He’s spent the last two book fighting alongside characters who are hundreds—sometimes thousands—of years older than him and possessed of superhuman powers. He sees himself as very ordinary in comparison (he’s not). He’s also grown up with a very strict belief system—he has been taught to see the world as a test to be faced. His expectations for himself are ridiculously high and he’s more than a little judgemental about others (don’t worry—they don’t let him get away with it). Arriving in his new city, he also finds that everyone seems to be asking something more of him—is he supposed to be fighting monsters or becoming a politician or seeking out the truth behind the many lies of Aliann? Of course, working out what he can do and what he wants to do would be a lot easily without the aforementioned monsters and politics, let alone the confusion of falling in love with a dragon who constantly defies his expectations. 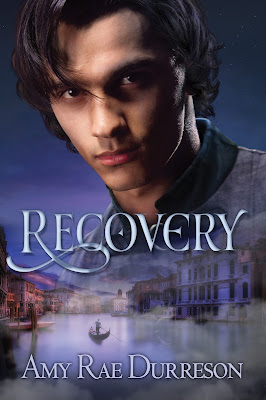 Resistance, exile, plague. Raif has survived them all, but now he finds himself in search of a new purpose. Traveling north to wake the dragon Arden, he hopes he has finally found a leader worthy of his loyalty, but Arden turns out to be more of a frivolous annoyance than an almighty spirit lord. Now bound to Arden’s side despite his frustration, Raif follows the dragon to the rich and influential lagoon city of Aliann, chasing rumors of the Shadow that once cursed his homeland.

With the election of a new duke at stake, Raif struggles to make sense of the challenges he meets in Aliann: a conspiracy of nixies and pirates, selkie refugees in desperate need of a champion, a monster that devours souls, a flirtatious pirate prince, and a machine that could change the world. For nothing in the city of masks is what it seems, from the new friends Raif makes to the dragon he follows—or even himself.


Raif said, worried, “I will do what I can, but I have very little influence or power.”
“You walk with dragons, Nightingale’s Son,” the old man said. “Your voice will be heard for that alone.”
Raif wasn’t so certain, but the two escorts were beginning to back away. His audience was over.
He worried about it as he and Annie headed back out across the water. “I really don’t think there’s anything I can do.”
She shrugged. “Then fail them. Meet your expectations, not theirs.”
“That’s not fair.”
She rolled her eyes. “Not fair, Annie, not my business, Annie, too much to ask, Annie, why me, Annie? Heard them all before.”
“I’m young,” Raif pointed out, “but I’m not that young. I take your point and, well, I suppose I can talk to Oskan, and Arden needs to know that Markell’s hoard are here. I’m not sure if I can say much to Kastrian without endangering them, and I don’t have any influence on the other Voices.”
“You danced at Isla’s ball last night. Or did you have no partners?”

“The other secretaries, for the most part, not the Voices themselves.”
“Only those they most trust.”
“Oh,” Raif said, feeling foolish. As the ruined isle dwindled below them, he asked, “How many times have you done this?”
“Brought strangers to Illaron?”
“Found champions to fight the battles you can’t.”
She was quiet for a while, but then said sadly, “I did not sleep. Everyone I knew grew weary and faded from the world. There were times when humans needed help, whatever the law said, and the law keepers were too deeply asleep to give it. I have kept the law. I have never done more than help mortals help themselves.”
“The first duke wasn’t the only one?”
“No. From time to time, up and down the river, I have intervened.”
Raif looked back at Illaron, dreaming and ragged against the haze in the distance. No boats pulled away from the island, but he thought he saw the heads of four seals bobbing in the water. “Was it there? Was that where he killed the serpent? Is that why they haven’t built on it again?”
She laughed. “No, but you’re starting to realize how they think. That island was at the eastern end of the lagoon, miles beyond the Isle of the Dead and the leper colony. It’s long vanished. The sands shifted, the tides changed, and the marsh swallowed it. Nothing here remains the same for long.”
“So why haven’t they built on Illaron? It’s close to the main city, and they’re short of land.”
“Oh, they claim it’s respect for the place where the city was founded, but in truth the foundations have rotted so badly that they’d have to strip it to nothing and sink new posts if they wanted to build anything that wouldn’t fall straight down again.”
Raif shook his head. “This is the strangest place I have ever been.”
“Yet you choose to settle here.”
It had been Arden’s choice more than his. “I’ve never stayed anywhere for long. I’m not sure if—”
“Perhaps Aliann will suit you, then,” she said, chuckling a little to herself. “Nothing here stays the same for long. The tide always flows through.”
“Maybe,” Raif said, startled. He hadn’t thought it of like that before.
“Now, where were you going before you found me?”
“The Square of the Seven Stars.” He shrugged at her. “Not that I had any idea how to find it from where I was.”
She laughed. “Follow the water, boy. Always follow the water.” Then, sounding amused again, she added, “Visiting the journalist, were you? And you claimed you had no influence in this city.”

Amy has a terrible weakness for sarcastic dragons, shy boys with sweet smiles, and good pots of tea. She is yet to write a shy, tea-loving dragon, but she's determined to get there one day (so far, all of her dragons are arrogant gits who prefer red wine). Amy is a quiet Brit with a degree in early English literature, which she blames for her somewhat medieval approach to spelling, and at various times has been fluent in Latin, Old English, Ancient Greek, and Old Icelandic, though these days she mostly uses this knowledge to bore her students. Amy started her first novel twenty-one years ago and has been scribbling away ever since. Despite these long years of experience, she has yet to master the arcane art of the semicolon.