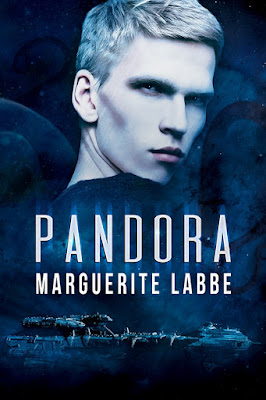 Haunted by the screams of the men he murdered, ex-Marine medic Riff Khora is serving a life sentence on board a prison ship. Seeking more punishment for his crime, he strikes a deal with the corrupt Captain Vidal—an exchange of pleasure and pain—and forges a new life leading the team that surveys space wreckage for salvage.

Ship engineer Zed Jakobsen’s psychometric abilities make prison a sentence worse than death, and the barrage of emotional stimuli is an unending torment. His only regret is that he didn’t kill the monster who sent him to prison, and only a glimmer of hope to escape a judgment he doesn’t deserve keeps him clinging to a brutal existence.

When they board derelict ship Pandora and discover a lone survivor, the hell of prison life plunges into abject horror. An epidemic of violence and insanity consumes their ship, driving the crew to murder and destruction. Mutual need draws Riff and Zed together, and their bond gives them the strength to fight a reality they cannot trust. But Vidal possesses the only means of escape from the nightmare, and he’s not letting anyone leave alive.

Riff and Zed:
Flawed, Wounded Characters Who Heal Each Other

I love a wounded character who learns to love and trust again over the course of a story. Who has to work to overcome personal demons and takes a risk to reach for happiness. And I love flawed characters. I want my characters to feel real, to be as alive to the readers as they are to me and real people have flaws, they make mistakes, they have to pick themselves up and move on. In Pandora I have two characters who I fell in love with are both wounded and flawed and who find forgiveness in each other.
Riff Khora is a smart man, a medic who cannot stop himself from trying to help people who need it and who takes each death as a personal failure on his part. He is a confident leader who doesn’t take advice. He’ll listen to it. He’ll ask for it if he feels he doesn’t know something, but if his mind is made up on a course of action, it’s set. He knows how to provoke and push people into getting what he wants, and won’t hesitate to manipulate a situation. And these qualities get him into trouble a few times.
He lost the man he loved in a horrible, violent way and he had to make a gut-wrenching decision in the process. The people he killed haunts him. The war he was involved in before his sentencing left lingering marks as well. He is not a violent man, but it capable of it in defense or revenge for those he cares about, but even though he pretends it doesn’t bother him it does, eating away at his defenses.
Zed Jakobsen doesn't have patience with people and figuring out what makes them tick. He'd much rather wall himself away and deal with a mechanical problem. Engines make sense. Tools work the way they are supposed to. He holds others at a distance even when it would be better for himself or the team to find some common ground to ease tension. There are times when he cares, but he doesn’t want to, and that effects how he treats others. He can be snappy, testy, and standoffish which finds a match when he runs into Riff’s prickly side. And they are an equal for each other in stubbornness.
Zed’s psychometric abilities haven’t made his life easy either. He has nightmares from the things he’s seen when he’s touched other people. He’d been shunned and isolated, then thrust from that environment into a prison where everything he touches leaves mental marks. He is clinging to an edge before the epidemic of insanity takes place.
When Riff and Zed meet, there is instant physical attraction, but as they get to know each other they find they balance each other very well. Riff is a natural leader who needs to give someone control in the bedroom. Zed follows Riff’s directions as a leader because he trusts him and feels that he is the best one to get them out of this situation. When they are alone he has zero qualms about taking charge.
Riff knows what Zed can see when he touches him and is relieved when Zed doesn’t turn from him in disgust. In return, Zed finds someone in Riff who can handle his abilities without shunning him. Riff is intrigued by Zed’s abilities and when those abilities change he sees it as a medical puzzle. Zed finds Riff’s mind soothing. He’s constantly thinking, his mind is always going, and Zed thinks all that activity is fascinating. Plus, Riff has a strong natural shield so it’s not a constant barrage of impressions and feelings that it might be with someone else when he touched them.
Their growing bond and their acceptance in each other give them strength to keep fighting as the situation keeps getting more desperate and their survival depends on trust. 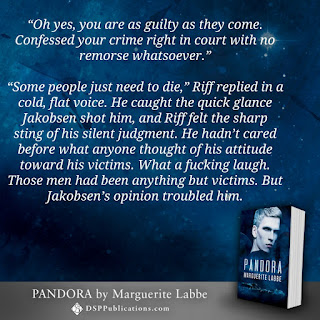 “You’re reading me, aren’t you?” Riff asked, though there was no rancor in his voice.
“Do you want me to stop? It’s come back. I seem to have more control, though I’m not sure why.” Zed’s thoughts touched on Noyes again and he shuddered.
“It’s a little too late. You probably already know every damned secret I have. There’s a helluva lot more to be concerned about than having my personal demons exposed.”
Riff’s hands drifted over Zed’s chest until he found the outline of the bandage. He traced the edges, his touch gentle and sure. “If Dr. Barboza didn’t do a good job patching you up, I’m going to take it out of his hide.” The words were said lightly enough, but Zed heard the underlying fierce protectiveness. He was a healer who killed, a protector who failed. No wonder he was screwed up in the head.
And now Zed had killed too, and he couldn’t bring himself to feel bad about it either. They were just trying to survive. All of them, the captain’s crew included, but Zed wasn’t going to let their survival be at his expense anymore.
“Remember the last time we were in this room?” It seemed so long ago that Riff had asked him to hurt him, to fuck him, and though it had been rough and hot, it had been tender and sweet too.
“I’m never likely to forget it,” Riff said with a rusty laugh.

“Me neither. Hold on to that memory, Riff. Don’t think about the other times you were locked in here, in the dark or when he was trying to break you. I’m the one here with you. Everything outside of this room may be fucked up, insane, and evil, but what’s between you and me isn’t.”
Riff’s hands moved to his face, and the light touch of his fingers gave Zed something to focus on other than his fear and helplessness. This wasn’t over between them, and they’d find a way to save themselves. Then Riff’s mouth followed the path of his hands, and he was kissing Zed.
Every time Riff had kissed him, it had been full of demand, it had been meant to push his buttons. He’d allowed Zed to kiss him tenderly, but he’d never initiated a kiss like this until now. It had taken going to hell for Zed to find what he’d unknowingly been searching for his whole life. He looped his hands around Riff’s neck and kissed him back, trying to show in that contact what he felt and wasn’t sure how to express.
“You scare me,” Riff murmured as he pulled back. Zed sensed that fear as if Riff was on the edge of tumbling into a void. He also sensed the deeper emotions that Riff struggled to hide, the care that Zed echoed.
“With everything that has happened since we went on board the derelict, I’m the one who scares you?” Zed asked.
“You make me want what I had before. I didn’t think I could feel like this again.”
****

Marguerite has been accused of being eccentric and a shade neurotic, both of which she freely admits to, but her muse has OCD tendencies, so who can blame her? She loves writing stories about the beauty of love with all of its fascinating quirks and the strength of family, whether it’s the family you’re born into or the one you create. Marguerite was born in New Hampshire, grew up as a military brat, moving from one end of the U.S. to the other before settling down in Southern Maryland. She married her next-door neighbor and best friend, and they have one son and two cats who rule them.

To her dismay, she has failed to convince her Alabama born husband to move north, where being a passionate Red Sox fan is perfectly normal. She runs Apocrypha Comics Studio with her husband and they often trek off to comic book conventions on the weekend where they celebrate all manner of geek culture. In her spare time she loves reading novels of all genres, enjoying a table top role-playing games with her friends, many which end up on the Role With Us podcast, and finding really good restaurants where she can indulge in her love of food and wine.