Hi, everyone!  Thank you so much for being a part of the blog tour for the release of ‘Michael, Reinvented’.

When I started ‘David, Renewed’ I had no intention of writing a series. Actually, I was going to write a short story for a Blue Collar anthology that Dreamspinner Press was putting together. But, as my beta would tell you, I’ve never written anything short in my life. Even when I used to do drabbles, a short writing exercise to try to help me be more concise, my drabbles were short stories. And a hundred words? That was almost impossible for me. In fact, in just the first paragraph of this post I’ve written a hundred and forty words and I’ve said almost nothing! So, anyway, back to the point!! David’s story was going to be a stand-alone novel.

The problem was, as I introduced David and Jackson, I introduced their friends. No one lives in a vacuum; there are friends and families that populate main characters lives, there are jobs and houses and pets and cars and – well, you get the point. When I introduced David’s best friend and assistant, Michael, he very definitely took on a life of his own. Snarky and snotty, I knew there was more to Michael than being a secondary character. When Jackson, David’s love interest, came along, his best friend came with him. Gil Chandler is a big man with a big heart, and almost instantly there was this spark between Michael and Gil; I knew they weren’t going to leave me alone until their story was told.

Michael has a hard crust he’s forged over the years since he graduated from college, carefully constructed to save him from ever feeling heartbreak again. Sex is one thing; he has no intention of being a monk. But love? Love is something altogether different. Gil on the other hand has arrived at a place in his life where he’s no longer satisfied picking someone up at the bar on Friday night and not knowing their name when they leave on Saturday morning. He wants a life with a partner, and he wants that partner to be Michael. As ‘Michael, Reinvented’ begins, Michael would say he DOESN’T want anything long term, and anyone trusting their heart in someone else’s hands in an idiot. His problem is he yearns for the same thing Gil does, more than even he knows.

The group of friends from ‘David, Renewed’ that begin Delta Renovations, Restorations and Design are all back; David and Jackson are back, of course, embarking on a new direction in their relationship.  Vernon, the older guy with the grizzled exterior, and Manny, the friend who survived a nightmare relationship that left scars both internal and external are both back. But, there’s a new character in this book, too. Gil’s dad is discussed in the first book, but here he puts in an appearance, and Michael learns more about the man he’s trying very hard not to love from the care he takes with his father.

Gil’s dad is a special character to me. Basically, he’s my dad. My dad was a brilliant man; a senior computer systems analyst when computers were the size of a house, my dad was also a professional athlete in his younger years, a WWII veteran, a youth pastor and a man who wrote poems in his spare time.  Like my dad, Gil’s has been diagnosed with ‘dementia’ and is in a facility specifically for people suffering from the cruelest diseases of old age, the ones that steal everything that makes a person who they are. Doctors won’t specifically call it Alzheimer’s, but everyone recognizes the signs.

Fortunately for Gil, his dad is still a happy person. The disease has stolen a lot from Gil senior, but an educator’s love of words is still with him. The scene where Michael meets Gil’s dad, and they exchange increasingly silly words, was one of my favorites to write. Gil taking care of not just his elderly dad but his dad’s estate and the expense of continued care is something I’m very familiar with. I know how hard that is; I wanted Michael to learn something profound about Gil through the burdens he takes care of without complaint every day. I also wanted Michael to learn something about himself, too; that he’s a better, more compassionate man than he’d ever admit out loud.

A very real menace returns in this book, too, a continuation of what began in book one. There is someone who really doesn’t like the men of Delta Restoration, and who is trying to intimidate them. They don’t know who the threat is or what they want, but they’re accelerating. For Michael and Gil, the threat shapes a lot of what happens in this book, but so do the feelings Gil wants to celebrate, and  Michael can no longer ignore.

Once ‘David, Renewed’ was written, I know there was no way Michael and Gil were going to wait until Book Three for their happily ever after. I hope Michael and Gil’s love story captures you the way it did me. 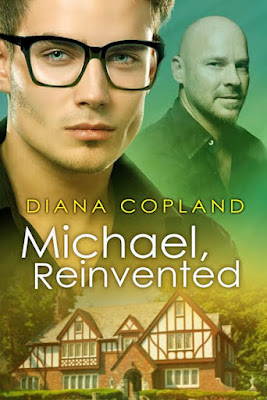 
Diana Copland began writing in the seventh grade, when she shamelessly combined elements of Jane Eyre and Dark Shadows to produce an overwrought gothic tale that earned her an A- in creative writing, thanks entirely to the generosity of her teacher. She wrote for pure enjoyment for the next three decades before discovering LiveJournal and a wonderful group of supportive fanfiction writers, who after gifting her with a "Best New Author" Award encouraged her to try her hand at original gay fiction.

Born and raised in southern California, Diana moved to the Pacific Northwest after losing a beloved spouse to AIDS in 1995. She lives in eastern Washington near her two wonderful adult children and her surprisingly supportive parents.