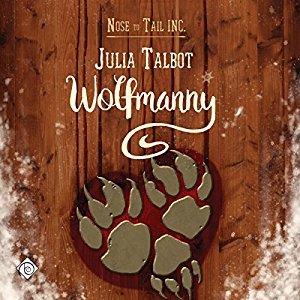 Three hot werewolves, sexual tension thick enough to cut with a knife, an impending Colorado winter, and a rambunctious pack of werewolf pups. Stand back and watch the fur fly.

When Kenneth Marcon loses his nanny to a bite from one of his inherited kids, he knows he needs someone strong to contain five werewolf children. What he finds isn’t a stalwart nanny, but a werewolf manny named Jack. Kenneth and his assistant, Miles, aren’t sure if Jack is what they need, but he’s what they have to work with.

Jack’s got what it takes to keep the kids busy—and attract both Miles’s and Kenneth’s attention. The two old friends have been circling each other for years, but with Jack as the final piece to the puzzle, it’s time to finally act on those urges. When Kenneth is forced to travel instead of solidifying the bond with his new mates, Jack and Miles take desperate measures to get him back, even as they save the kids from one disaster after another. Amidst the chaos, they have to learn how to become not just a pack, but a family.

Ironically for me this one was saved by the narrator. Joseph Morgan is a new to me narrator and I have to say he totally saved this story for me. His voices were good even his kids voices and there were more than a couple of kids, both boys and girls, in this one.

'Wolfmanny' is the story of Kenneth who is the pack alpha, Miles who is Kenneth's second in command and whose feelings for Kenneth are stronger than either are willing to acknowledge until the arrival of Jack. Jack is the latest manny in a long list of nannies hired to care for Kenneth's nieces and nephews who have come to live with him following his sisters death. It's not easy finding someone to corral 5 kids let alone 5 shifter children ranging in age from 15 down to 3 year old twins, but Jack's not just any manny...he's ex-military and with this bunch that's a definite plus.

I enjoyed the interaction between these three. While both Miles and Jack respected the fact that Kenneth was the alpha it didn't mean that they weren't willing to call him on his bullsh*!. Unfortunately it's as our men are exploring their newly discovered attraction that Kenneth needs to go out of the country on business. The repercussions from his absence have some unfortunate consequences on Kenneth and Jack and Miles decide that desperate times call for desperate measures.


There was a lot of potential to this story and for me there was only one real issue and it was a big detraction from what was suppose to be the main storyline of the relationship between these three men and that was the details...all the details...so many details and more details. There were so many details at times that was all there was detail, after detail, after detail, after detail and on and on and on. I get that this was done in part to reinforce how crazy the day to day lives of these men were with 5 children, a pack to protect and provide for and a multi-million dollar company to run but at times it was such a distraction from the story that well to be  honest I pretty much forgot anything else that was going on other than the details of this group cooking a mean. I think anyone who comes from a large family or runs a business can appreciate how busy life was for this group without the constant and repetitive litany of the details of their day to day activities.

I have to admit had I been reading this the constant repetition of these events would probably have bored me to tears. Luckily for me I was listening to the audio book and Mr. Morgan managed to keep things from sounding like so much tedious repetition.

Unfortunately for me this was a bit disappointing because my first experience with reading Julia Talbot was her 'Thatcher Brothers' series and for me that series was pure delight. I love those Thatcher boys and Ms. Talbot's writing was over the top entertaining and I have to admit that series is the standard by which I judge anything I read from this author. So while the Thatcher's were all 5 star reads for me...the men of Wolfmanny just didn't measure up. They were entertaining just not over the top.

An audiobook of Wolfmanny was graciously provided by the publisher in exchange for an honest review.