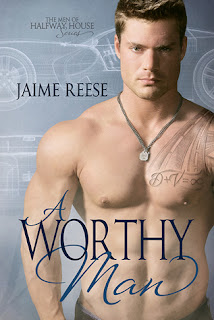 
Vannguard Shaw has spent the last ten years serving a life sentence and adjusting to the ache of solitude. He accepts his fate, a sacrifice for the only man he ever loved and the one person who saw beyond his rough edges.

Drayton grew up with a trust fund and pre-planned future, but an unexpected encounter one night forces him to abandon everything and start from scratch. He is now a self-made man and developer of one of the most sought after electric exotic automobiles in the world with a fortune greater than that of his birthright. Yet, he’d surrender it all—again—for the only man who’s still ever-present in his heart.

After a decade and entirely too much distance between them, Vann is suddenly released back into a world that has been nothing but cruel. Drayton never lost hope they would once again reunite and pick up where they left off, but Vann’s stubborn nature and repeated encounters with a heartbreaking world prove to be a challenge.

Vann needs to tap into his fighting spirit’s reservoir of strength and hope life doesn’t punish him for taking a chance. Only then will he realize his own value and feel worthy enough to finally have Drayton’s heart. And their chance at forever.

Every week Drayton sends a letter. But he never receives a reply. He doesn't expect one.

His best friend, his lover, has been in prison for ten years. His crime? Saving Dray's life.

Vannguard Shaw never had much: an alcoholic father who kept him around for the welfare money and a lifetime of bruises. That all changed when he met Dray, who became his confidante, his boyfriend, his first and his everything.

Dray is the owner of D & V Infinity, a wildly successful car manufacturing company. He's wealthy and lives alone in his pristine penthouse. He's out of touch with his employees and doesn't understand what makes people tick. There's only one person he can read, one person he needs like his next breath.

Dray never gives up hope. He has one purpose in life: freeing Vann.

This book is essentially about Vann adjusting back to life outside a prison cell, which involves transitioning through the Halfway House ran by Matt and Julian. Vann has no computer skills and doesn't believe he has much to give.

The story isn't without some angst. Vann's despicable father makes an appearance, and Dray has to confront his mother, the greedy, cruel woman responsible for sending Vann to prison, but the focus is on healing, not pain; comfort, not hurt.

There is some mild office drama related to the head designer who currently works for Dray, an arrogant douchebag named Sean. The scene where Vann finally asserts his authority in front of god and the entire design department had me grinning like a fool.

The author skillfully weaves in short flashbacks and letters to show us how the men met and the depth of their love. Their HEA is never in question. Every moment between Vann and Dray is a fairytale in miniature.

Neither man has been with anyone else; ten years of abstinence go up in smoke with a slow burn filled with lingering kisses & heated glances as they wait for a weekend to be alone. Damn, but this might be the sexiest story in the series.

Dray and Vann are on FIRE!

We briefly visit with the other couples and meet new friends, including Ben, another resident of the house. Ben, who is Deaf, is sweet and shy; he's always observing. Vann may have a rough exterior but he has the best heart; what he does for Ben (such a small thing but so important) had me reaching for a tissue, or two.

If I had to pick just one word to describe A Worthy Man, it would be ROMANTIC. Dray and Vann never give up on each other. They are colors in harmony.

The world belongs to those who read.