ARC Review: To Touch You (Mates 4) by Cardeno C. 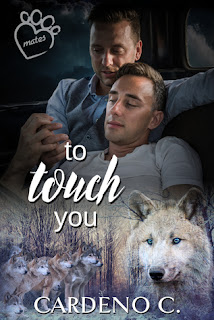 
“His name is Salvatore Rossi. He’s a vampire. And he’s my true mate.”

By not relying on anyone except himself, Salvatore Rossi escaped a dead-end existence and reached the height of corporate success. But just when he has everything he always wanted, fate throws Salvatore a challenge he can’t solve alone and a young wolf shifter comes to his rescue.

Since childhood, Yoram Smith’s family was certain he would grow to become Alpha and save their beloved pack from its slow demise. When the time comes for a new leader, Yoram is forced to juggle his duty to care for a splintering pack with his duty to care for an absent mate, and his own strength suffers.

Being turned into a vampire didn’t alter Salvatore’s life philosophy: if you don’t rely on anyone, nobody can let you down. But when the boy who saved his life becomes a man who needs his help, the icy vampire must find his humanity.

Cardeno C. is a master of the sweet 'n' kinky. I love the hell out of this series and was as excited as a kid on the first day of summer vacation when To Touch You landed on my Kindle.

CC's books are always compulsively readable. I can't put them down. I read this book late into the night, woke up the next morning, and read some more.

To Touch You can be read as a standalone, but the MCs from the other books, particularly Ethan and Miguel from Until Forever Comes, actually play a fairly substantial role in the story. My advice? Start with book 1.

To be honest, this is probably my least favorite book in the series, which is to say I still enjoyed it. A LOT. But I had a few niggles.


The romance doesn't begin until we're 70 percent into the story. The MCs meet when one of them is 7 and the other is in his late-30s (you can see why this might pose a problem).

Salvatore is a human (a human with a terminal illness) until Yoram, a young shifter, insists Sal is his friend and must be saved. So Sal is turned into a vampire.

Sal, solely focused on business and money as a human, becomes a wealthy vampire recluse. He can't be out in sunlight, and he stops aging, so he leaves his company in the hands of others and watches a lot of TV.

Sal is lonely and isolated, but it was hard to feel sorry for him because he's just so damn selfish. He doesn't think about Yoram at all. Sal knows Yoram believes him to be his true mate and allows Yoram to give him blood, but he does nothing for Yoram in return.

Yoram is busy taking over as Alpha and trying to build up his pack. He's 27 when Sal finally shows up.

Then, miraculously, Sal has a change of heart in like 24 hours, and the smex hits the proverbial fan. Then it's all biting and mating and MINE MINE MINE. And you won't hear me complain, but I still wanted a more believable slow burn and stronger relationship development.

Sal goes from a flat, unmotivated character seemingly without a sexual identity to an ideal mate in 3.2 seconds.

The HEA comes almost immediately after. And it's a lovely HEA; of course, it is. That's what CC does best. But I wanted more page time with the MCs together.

The pack politics clutter up the story, and I got a little tired of Yoram's cousin Toby, who is clearly meant to provide comic relief but who started to annoy me instead.

I was sad when this book ended and happy that Sal and Yoram got their ride into the sunset. If CC writes more Mates books, I'll be there with bells on.

As he read, I fell in love. The way you fall asleep: slowly, and then all at once.