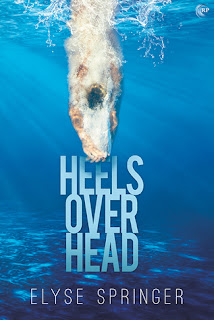 Jeremy Reeve is one of the best divers in the world, and he’s worked hard to get where he is. He intends to keep pushing himself with one very clear goal in mind: winning gold at the summer Olympics in two years. That medal might be the only way to earn his father’s respect as an athlete.

Brandon Evans is everything Jeremy isn’t: carefree, outgoing, and openly gay. With his bright-blue eyes and dramatic tattoos, he’s a temptation that Jeremy refuses to acknowledge. But Jeremy can’t ignore how talented Brandon is—or that Brandon has no interest in using his diving skills to compete.

They’re opposites who are forced to work together as teammates, but Jeremy’s fear of his own sexuality and Brandon’s disinterest in anything “not fun” may end their partnership before it begins. Until a single moment changes everything, and they help each other discover that “team” can also mean family and love.

Heels Over Head is the second book I've read by Elyse Springer, and I really enjoy her writing style. I always feel like I'm IN the story versus on the outside looking in. The dialogue has a certain rhythm, and each character is given a voice.

In addition to the MCs, Jeremy and Brandon, we meet:

- Jeremy's emotionally abusive redneck family (whom I loathed with a passion); they are so homophobic and dismissive, they’re almost caricatures.

- Andrej, Jeremy and eventually Brandon's diving coach, a man of few words who is much more perceptive than Jeremy realizes. Andrej is more of a father to Jeremy than his biological father; Jeremy just doesn’t see it.

- Val, another diver and Jeremy's best friend who becomes Brandon's friend as well. All the love for Val! She’s a true confidante to both men. Her struggle to please her demanding parents while maintaining sanity is an interesting side story in the book.

- Aaron, Brandon's best friend from Texas, who warns Brandon to stay away from men like Jeremy who are “skeletons” (gay men so deep in the closet, they shrivel up and become nothin’ but bones—no spirit, no heart).

Brandon is a supremely likable character. He hasn't had an easy time of it and is used to taking care of himself. He's independent to a fault, but he's also an amazing friend and listener. He's funny, easygoing, and compassionate. Brandon is a talented diver, but an unpolished one.

Jeremy is resentful of Brandon from the moment he sees Brandon's sculpted body covered with ink. Andrej came out of retirement to train Jeremy, and Jeremy doesn't want to share. But share he must, not just with Brandon but also with Val, whose parents (former Olympians themselves) push her relentlessly.

The story spans two years. Jeremy is working toward Olympic gold, and to say it's all that matters is an understatement. Jeremy lives and breathes diving. He's intense, focused, and driven. He wants to make his father and brothers proud, even though we see immediately that they will NEVER be proud; Jeremy could travel to the moon and back, and they'd sneer and call him a f--.

Jeremy tells Brandon that his family loves him, but I had serious doubts. Love isn't spiteful; love doesn't tear you down. That's not love. That's resentment and envy. I hated that Jeremy was so dependent on the approval of people who didn't give a flying fuck about him.

Jeremy's obsession with winning a medal is all-consuming. Jeremy doesn’t drink. He doesn’t eat sugar (like EVER). He doesn’t have sex. He does nothing but go to school and train. He’s a machine.

Brandon does most of the work in their relationship. He puts up with Jeremy's moods and rudeness, and slowly, carefully breaks through Jeremy's hard exterior to the deep-seated insecurity that lies beneath.

To be fair, Jeremy does care about Brandon; he's just scared. He takes care of Brandon when Brandon falls ill with the flu, and when he discovers Brandon's precarious financial situation, he immediately wants to help.

However, Jeremy's love goes only so far. Shaken up by yet another conversation with his callous father, Jeremy is cruel to Brandon (much like his father is cruel to him) and admits that he will ALWAYS choose diving over Brandon.

The pacing in the story is a little uneven. Some moments go on for pages, and some months just disappear. Despite this, the story never dragged. I was very much invested in Brandon and Jeremy's relationship.

I loved the sexy moments between Jeremy and Brandon (Jeremy is an honest-to-god virgin, and Brandon the very best teacher). I even liked all the diving talk. I'm always impressed when authors do their research, and it's clear Springer knows diving.

But for me to fully believe in this HEA, I needed Jeremy to SAY more, to DO more. We see his internal musings, but I didn't think he truly communicated his feelings to Brandon. Likewise, Brandon's future is nebulous: Is he going to dive again? What about money? This is barely touched on.

To be fair, the ending is NOT a cliffie. The MCs ARE together. The feels are there. But a major plot line is left dangling. As a reader, I was invested in the outcome and left hanging.