Release Blitz and ARC Review: Back Piece by L.A. Witt 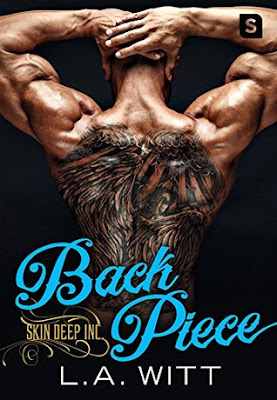 Colin Spencer is a tattoo artist with a past he’d prefer to keep a secret. Actually, he has a few secrets that he’d rather people didn’t know about, which is why Colin doesn’t do commitment. But when a shy sailor approaches him at the gym, Colin finds this guy pushing all his buttons.

Growing up in a conservative family, then escaping with the Navy, Daniel Moore is an unsure virgin who feels like he can’t share his true self with anyone. Seeing Colin—and his tattoos—at the gym are the sign Daniel needs to finally get those tattoos he’s always wanted, and maybe try his hand at flirting.

As Colin and Daniel spend more time together, their awkward hesitations turn into a deep passion neither expected. But with both men harboring secrets, will their relationship be able to survive their insecurities and become something beautiful?

Back Piece by L.A. Witt is a sexy, emotional journey of two people learning to love and finding acceptance for who they really are.


Outside, some of the guys from the gym were milling around in the parking lot, so Colin took Daniel around the back of the building where they’d have some privacy. There he stopped and faced him, fighting the urge to fidget nervously. “So, how’s the tattoo healing?”
“Good. Good.” Daniel shifted his weight. “It’s still kinda itchy, but it’s getting better.”
Colin grimaced sympathetically. “That’s the worst part. The pain I can deal with, but the itching sucks. You’re not scratching it, are you?”
“No, of course not.”
Their eyes met, and they both smiled, but quickly looked away. Awkwardness didn’t even have to set in—it was already present and accounted for.
After a moment, Colin raked a hand through his hair. “Look, things went really fast the other night, and I’m sorry. I mean, maybe—”
“No. No.” Daniel shook his head. “You didn’t do anything wrong. I just kind of freaked out.”
“But . . . why?” Colin struggled to hold his gaze. “Did I make you nervous?”
“No, you didn’t. But what we were doing . . . yeah. It did. Kinda.” He paused. “Okay, a lot.”
“So, how is that not me making you nervous?”
Color bloomed in Daniel’s cheeks, but blushing wasn’t as cute this time. He seemed genuinely uncomfortable and embarrassed, and Colin’s stomach turned with guilt over putting him in this position.
Daniel took a breath and met his gaze again. “The thing is, that was . . .” He scratched the back of his neck and added a barely audible, “My first time.”
“Your . . .” Colin blinked. “Are you serious?”
Daniel was bright red now, and nodded. “Yeah. I mean, I made out with a guy while I was on cruise, but otherwise . . .” He laughed uneasily. “I’m a virgin.”
Colin stared at him. “Really?”
“Wasn’t it obvious?”
“Not from the way you kissed, no.”
Daniel gave a soft, self-conscious laugh. “Beginner’s luck, I guess.”
“Something like that.”
Daniel moistened his lips. “So it wasn’t that I didn’t want to do anything the other night. I did. And it was . . .” He laughed again and looked at Colin. “It was amazing. I know I took off and all, but it was fucking . . .” He whistled, shaking his head.
Colin smiled. “Good. I was worried I’d maybe gone too fast. Pushed you too far.”
“No. It wasn’t your fault. I mean, I liked it. A lot. And I definitely want it. More. More of it. I just . . . I . . .” He pinched the bridge of his nose, pausing as if trying to collect his thoughts. “Okay, the reason I freaked out is afterward, I thought you’d want me to reciprocate. And I . . .” He dropped his hand and stared at the ground between them. “Man, I don’t have a fucking clue what I’m doing. I guess I was scared you’d be disappointed.”
“Disappointed?” Colin shook his head. “No, not at all.”
“Yeah.” Daniel laughed humorlessly. “That’s because I left before I had a chance to make an ass of myself.”
“My God. Did you think . . .” Colin cautiously stepped closer. “You wouldn’t have made an ass of yourself.”
Daniel said nothing.
Colin advanced again, and now he had to be well within Daniel’s comfort zone. He halted, giving Daniel a chance to pull back if he wasn’t comfortable, and when Daniel didn’t move, Colin reached for him. He paused, glancing around to make absolutely sure they were still alone out here, and then slid a hand around Daniel’s waist, his own skin prickling with goose bumps even before Daniel’s breath hitched. “So you’re afraid you won’t be good at it, right?”
Daniel nodded, still avoiding Colin’s eyes.
“Is that the only thing stopping you?”
“Definitely.” Daniel hesitated, but finally made eye contact. “Because I really, really wanted to keep going last time.”
Colin grinned. “Is that right?”
“Mmhmm.”
“Well, my house is just over there.” He nodded past Daniel. “Five minute walk, and my brother works nights, so we’ll have it to ourselves.” He lifted his eyebrows. “You want to?”

Also available on iBooks and GooglePlay

Back Piece is the first book in L.A. Witt’s latest series Skin Deep Inc. This is the story of two men, damaged and hiding from the world. Colin is a tattoo artist and the owner of Skin Deep Inc. His past has left him damaged in so many ways but he’s a fighter, and with determination and a solid support system he takes one day at a time and struggles to keep himself together. Commitment’s not on the table for him because he’s not ready to share his past with anyone else.

Daniel Moore is 26 and joined the Navy to get away from his ultra conservative and controlling parents. Daniel’s been hiding who he is and what he wants his whole life. Raised by parents who loved Daniel not for who he was but who they believed him to be, Daniel’s kept himself firmly ensconced in the closet, but one look at Collin when he sees him for the first time at the gym with his ripped body covered in tattoos gives Daniel the courage to finally start going after what he wants: Some tattoos of his own and a man to go with them.

I loved how the relationship between these two men developed. It wasn’t love at first sight, there was a definite attraction but neither of these men were looking for the ‘L’ word.


Colin likes big, strong military men like Daniel…and Daniel…well, Daniel likes muscles and tats. What starts as a business relationship when Daniel approaches him about his tattoos easily turns into more as Colin puts ink to skin. It’s during this first tattoo session that they begin to realize they also enjoy each other's company, and once again their relationship shifts to something more. and they become friends and then friends with benefits when the attraction becomes too strong to deny.

It’s during this time that Colin begins to open up and share his demons with Daniel. Colin’s issues aren’t the type that got away, and he realizes that he needs…even wants to share this part of himself with Daniel. Neither man is willing to label their relationship but each acknowledges its importance in their own way.

I loved that Colin is both supportive and non-judgemental of Daniel’s reluctance to come out to his family, never pushing him to do what he is so obviously not ready for. He even spends a day with them as Daniel’s friend…his strictly platonic friend, and that Daniel shows him the same non-judgemental support when Colin opens up to him about his issues. The relationship between these two is so warm and positive, and the author reflects this beautifully in how they share their passion for one another…it’s just hella’ hot…as in ‘turn on the cold shower’ hot.

For me, one of the best parts of this book was when Daniel’s parents visited. As much as I wanted them to be…these people weren’t evil monsters or even abusive. They were just normal, average people who loved their kids and believed they were doing right by them. Sadly, they were also misguided, and their idea of what the words ‘unconditional love’ meant had too many conditions tied to it. As a parent, this of course was the part of the book that made my heart ache because there are too many Daniels out there in the world. Good kids who just want their parents to love and accept them for who they are rather than who their parents believe them to be or want them to be.

Ironically though it was Colin who really tugged at my heart. Colin had a good and loving family, and they loved him for himself. For Colin it was the outside world that left him feeling broken and damaged, keeping him from seeing that he was a beautiful person inside and out. It’s not until Daniel that Colin feels like he’s found someone who sees him…not who they think him to be or want him to be but him…the Colin that is and likes what he sees…in fact, loves what he sees.

As much as I loved the ending of this book it was part of the reason that this was a 4 star read for me and not 5. The ending in a lot of ways was so good, it was happy with a tiny expected touch of sad but unfortunately it was a little too abrupt as well. For me, this would probably have easily been a 5 star read if the first part had been a tiny bit shorter and the ending had been a tiny bit longer, but, be that as it may, at the end of it all, ‘Back Piece’ was still an enjoyable story worth reading.

An ARC of ‘Back Piece’ was graciously provided by the publisher through NetGalley in exchange for an honest review.

L.A. Witt is a M/M romance writer who has finally been released from the purgatorial corn maze of Omaha, Nebraska, and now spends her time on the southwestern coast of Spain. In between wondering how she didn’t lose her mind in Omaha, she explores the country with her husband, several clairvoyant hamsters, and an ever-growing herd of rabid plot bunnies.