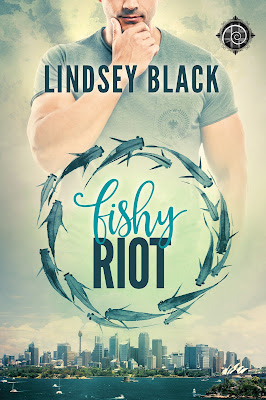 So, Fishy Riot has been out for a few days now. If you’ve read it, thank you for reading and I really hope you had some fun. Obviously, it’s not a serious book. It’s an action comedy romance, and it’s set in Australia. Nothing in that sentence implies seriousness, so… So! If you haven’t read it and you want a good laugh then this might be the book for you! It’s hard to say, since it is in all honestly very, very… unserious. I thought for sure that unserious was not a word. Turns out it is and I’ve learnt my new thing for the day.
At this point it’s hard to know what to talk about, I’ve talked about pretty silly things on this little blog tour, including love, piss, utes and weird stuff, so I thought I would talk about Emma (because that makes sense?).
I decided on this because most people who’ve read Fishy Riot end up talking about Emma. She’s Taylor’s niece, and she’s a bit of a riot (ha!). She’s one of my favourite characters, mostly because you get to see just how crazy family can be through the honesty of a five year old. But also because you realise how we get to be so crazy, watching our parents be crazy and all that.
A lot of people have asked if Emma was inspired by my own childhood. Sadly, if anyone in Fishy Riot reflects me as a child it’s probably Jay, Emma’s big brother and all-round trouble maker. He’s the curious one, always destroying things in his path to see what might happen next. Emma is much more my little sister in that regard, though my real life sister was far more polite than Emma could ever hope to be!
Just to give you a great summary of me in childhood, this pretty much does it: 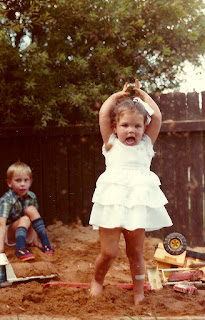 At some point that morning my mother clearly thought it advisable to dress me nicely in a white dress, do my hair complete with ribbons and no doubt take me somewhere lovely, like church. Unfortunately, that never lasted long and that’s me in said lovely white dress, stomping through the sandpit (who knows where my shoes went), probably having kicked over my brother’s tonka truck (that’s not my brother in the photo, that kid’s just plain scared in the corner and staying clear of me), no doubt storming toward some poor unsuspecting sod with a bellowing battle cry (alternatively, I may have spotted a toad I felt needed destroying). At least I have a band-aid over my latest injury instead of spurting blood from a new one. This image really does sum up my childhood, so as I said, I was much more Jay than Emma. Unfortunately, for my parents.
Childhood in country Australia is great. Everyone in your town knows you (and knows not to invite you to things before proofing their home against your specific level of destructiveness, again I’m so sorry mum). When I hear stories of my partner’s childhood it doesn’t sound as great, mostly because he grew up in Melbourne and Sydney. Parents seem far more fearful in cities, with good reason. There’s traffic and strangers and well….traffic? I have no idea what’s in cities, I avoid them like the plague, obviously. But in country towns there are cows and magpies to look out for and the occasional kangaroo or snake to flee and that’s about it. You can walk to school. You can walk home from piano practise. You can throw a screaming fit in the supermarket because you lost the last scrap of your ruggie and everyone will laugh at you while helping your parents find the stupid thing. (Yes, that really happened. So sorry, Mum!) The point of this is I assume Emma has had a strange mix of mine and my partner’s upbringing. She’s in Sydney, and she’s sheltered as a result, but she’s also surrounded by a massive family of very unique individuals who don’t treat her like glass. That has to rub off on you, and clearly…does.
If you have any ridiculous photos of your childhood, feel free to share. In the meantime, here’s an excerpt, featuring the lovely Emma.

He fell asleep. When he woke, it was not Sietta’s eyes staring at him, nor Sietta’s face. Little flecks of brown, completely out of place in the eyes of any Jameson, which told him exactly who it was. Not that he needed that to tell him, when there was that much fruit on the kid’s breath.
“Emma… back off.”
“Give her a break, ever since she heard Uncle Tay was let out of the hospital, she’s wanted to come and make sure your face was okay.” Brayden’s voice came from somewhere near the kitchen.
“My face is fine, Em,” Taylor grumbled in response, reaching down to haul her into his lap as he sat up and searched the living room. He spotted Brayden by the couch, handing Sietta a steaming mug of what smelled like ginger tea.
“You let him in?”
Sietta froze, eyes flicking from one brother to the other before settling on Taylor. “Was I not supposed to?”
Taylor shook his head, and Brayden laughed, going to collapse on the other couch, looking tired, as usual. “Don’t mind Taylor, he prefers to avoid family as much as possible.”
“But…. Clay lives here,” Sietta pointed out, less confusion in his voice and more amusement as he sipped his tea.
“Uncle Clay and Uncle Tay are the same soul split in two bodies,” Emma settled in Taylor’s lap like a small princess. Somewhat literally, as she was dressed as Elsa, her favourite Disney princess, along with the rest of the world under six.
“I don’t think that’s quite right,” Brayden told his daughter, but she scrunched up her nose at him.
“Nanna said it!” As if that would magically make it saner.
“See, not right, then,” Taylor agreed with Brayden.
“Well, she was right about your face!” Emma reached up to poke the dark purple bruises on the side of his head, making him hiss and bat her hands away. “Why did Uncle Clay let the thing hurt your face?”
“What’s your preoccupation with my face?”

Lindsey Black lives in Darwin, Australia, where the weather report permanently reads ‘humidity at 100%, only going to get worse’ for ten months of the year and ‘monsoon at 4:00 p.m. for exactly fifteen minutes’ for the remaining two. Between teaching and studying full-time, she escapes this oppressive environment to bushwalk for weeks on end wherever the mobile phone reception has zero bars for as long as possible and the weather report reads something along the lines of ‘blizzard likely.’ She enjoys martial arts, music, and mayhem, which explains the untidy state of her home where she attempts to write while splitting her minimal amounts of spare time between her incredulous husband, lazy Chinchilla cat, and crazed Siberian husky. If you expect her to sit and have a chat, it’s best to have a matcha green tea latte with almond milk on hand and your hiking boots within reach. Oh, and be sure to bring a guitar for impromptu jam sessions.