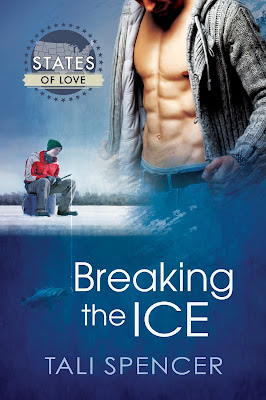 For Matt Wasko, February in Wisconsin is the best time of the year, and ice fishing on Lake Winnebago is his idea of heaven. With shanty villages cropping up, barbeques on the ice, monster sturgeon to spear, and plenty of booze to keep everybody warm, things couldn’t be better—until a surprise storm hits and an uninvited guest shows up at his frozen doorstep.

Matt’s not happy to see John Lutz, a coworker who cracks lame gay jokes at Matt’s expense. But John’s flimsy new ice shelter got blown across the lake, and it wouldn’t be right to leave even a jerk outside to freeze. Would it?

In the close quarters of Matt’s fabulous ice shanty, between stripping off wet clothes, misadventures with bait, and a fighting trophy-sized walleye, the two men discover creative ways to keep the cold at bay. And when John confesses his long-running attraction, Matt must decide if he can believe in John’s change of heart—and crack the ice for a chance at finding love. 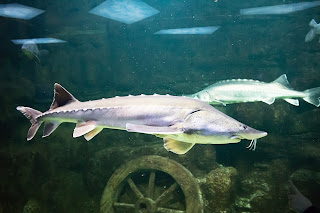 Breaking the Ice is about two men, love, and ice-fishing. There are lots of kinds of ice fishing, most involving eight-inch diameter holes in the ice and the usual gear of rod and fishing line. The fish involved might be ten inches and up to ten pounds.

And then there is sturgeon spearing.

The characters of Breaking the Ice get together during sturgeon spearing season, a two week period at the end of February. Sturgeon spearing is more of a social event than other kinds of ice fishing. People get together with family and friends, often in shanty towns that aggregate on frozen lakes. They spear by day (if they get lucky) and party hearty by night, eating brats and drinking beer and brandy around their grills.

The fish at the center of this peculiarly fishy culture is a strange one. For one thing, sturgeons are big. Not just ordinary big, either. It’s illegal to catch one that’s less than 36 inches long—and the record caught in the Lake Winnebago system was 87.5 inches (over 7 feet long) and 240 pounds. They don’t win many beauty contests, either. As a character in Breaking the Ice puts it:

“Only ‘pride’ Matty wants to nail this weekend has whiskers, weighs two hundred pounds, and looks like Mother Nature hit it with an ugly stick.”

Fortunately for the sturgeons, it’s not all that easy to spear one. The rate of success is about 16% and chances are good that most of the people out there on the ice are there for the partying anyway.

As a species, sturgeons have been around since the Triassic Age, some 245 million years ago. Despite their longevity on this planet, though, they’re in danger of becoming extinct in much of the world. Caviar, a pricey delicacy, is… sturgeon eggs. Sturgeons in many countries have been overharvested. The sturgeon population of the Great Lakes region of the United States was endangered as recently as the mid-20th century due to overfishing and because sturgeons (easily caught while spawning in shallow river shoals) were considered good fertilizer for farm fields. This has changed recently thanks to a remarkable partnership between sports fishers and state departments of natural resources.

Sturgeons are not a pretty, cuddly kind of fish, but those humans who love them are a fierce and dedicated breed. Sturgeon lovers help their local state regulatory agencies patrol sturgeon spawning grounds to ward off poachers, police the lakes during sturgeon season to make sure their fellow fishers aren’t catching over their one sturgeon limit, and donate generously to efforts to protect and preserve the species.

Which is what Matt Wasko and his fellow fishermen and women are. Fierce. Passionate. And out on the ice.