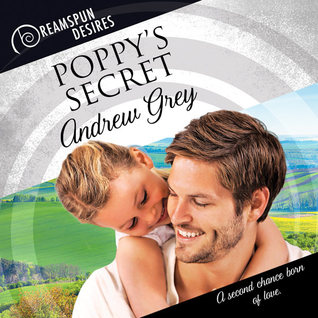 
Pat Corrigan and Edgerton "Edge" Winters were ready to start a family-or so Pat thought. At the last minute, Edge got cold feet and fled. Pat didn't bother telling him the conception had already gone through and little Emma was on her way. He didn't want a relationship based on obligation. He'd rather raise his daughter on his own.

Nine years later, Emma and her Poppy are doing fine. Edge isn't. He realizes what he threw away by leaving, and he's back to turn his life around and reclaim his family. It'll take a lot to prove to Pat that he's a new man, and even if Edge succeeds, the secret Pat has hidden for years might shatter their dreams all over again.

'Poppy's Secret' was my third try at an audio book narrated by John Solo involving children and definitely my last. Unfortunately, while I do like John Solo as a narrator for me his children's voices are the one area that falls short. For me, Emma's voice was at time's whiny...I'm talking nails on chalkboard here and her moments of cute and precocious became mouthy and rude add to this that her voice sounded very reminiscent of the children in the two previous books...reminiscent as in just like the little boys who were in 'Commitment Ranch' and 'The Virgin Manny'.

Children aside I enjoyed Mr. Solo' narration on this audiobook...especially his voice for Edgerton 'Edge' Winters and this was the other distraction for me in this book not Edgerton's voice but his nickname because and this is definitely a personal and ok...slightly entertaining issue. Simply put in my world 'Edge' is a wrestler...tall, blonde and well built so not really a bad distraction but still hard to stay focused when I should be thinking artist at this name and my brain's conjuring images of a wrestling match...specifically ladder matches...Edge liked to have ladder matches...ok, back to the book.

Poppy is Emma's name for her father, Pat the man who is raising her. Edge is Pat's ex. The man who left right when they were about to start a family. He wasn't ready for it then but 8 years later things have changed...well some things but not his feelings for Pat and if he can just get Pat to give him a second chance maybe they could have that family Pat's always wanted.


'Poppy's Secret' was a warm and sweet story of second chances and forgiveness. It was two men both realizing that they'd made mistakes and they still loved each other enough to want a dream that they'd given up years ago.

Pat and Edge's efforts to find their way back to each other were sweet and while the path wasn't smooth it wasn't filled with a lot of unnecessary drama either and I loved that we were given each man's perspective and not left feeling like it was one person's fault. Both men made mistakes and both needed to own up to their part in why things ended so many years ago.

Children's voices aside 'Poppy's Secret' was a very enjoyable listening experience about second chances at love, getting and giving forgiveness in order to have the life you thought you'd lost.

An audiobook of 'Poppy's Secret' was graciously provided by the publisher in exchange for an honest review.