Spotlight: In The Spotlight by Charlie Cochrane 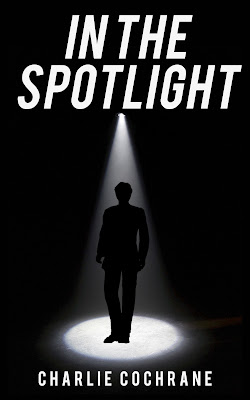 Francis Yardley may be the high kicking star of an all-male version of Chicago, but bitter, and on the booze after the breakdown of a relationship, he thinks that the chance for true love has passed him by. A handsome, shy rugby player called Tommy seems to be the answer to his problems, but Tommy doesn't like the lipstick and lace. Can they find a way forward and is there still a chance for happiness "nowadays"?

Rick Cowley finds himself taking up am-dram once more, thinking it’ll help him get over the death of his partner. He’d never anticipated it would mean an encounter with an old flame and the sort of emotional complications the Bard would have revelled in. Still, old Will had the right word for every situation, didn’t he?

In the Spotlight was inspired by my love of the theatre – Shakespeare and musicals in particular. That may seem an odd combination, but it isn’t; there are only two sorts of production, those you want to see and those you don’t. And there are actors who have done very well in both genres. Gary Wilmot is not only the best Bill Snibson (Me and My Girl) I’ve ever seen, he’s the funniest Bottom (A Midsummer Night’s Dream). He was a pretty nifty Billy Flynn, too and I’d love to see him as Toby Belch in Twelfth Night.
Twelfth Night is, according to the Oxford Dictionary, “the evening of the fifth of January, preceding Twelfth Day, the eve of the Epiphany, formerly the last day of the Christmas festivities and observed as a time of merrymaking”. That sense of merrymaking and mischief certainly pervades Shakespeare’s play of the same name, but it also has a darker side, two couples finding their happy ever after, set against a background of great sadness and cruelty. It’s full of strange sexual politics and confusion, and the most recent version I saw (at Chichester, with Patrick Stewart as a brilliantly funny Malvolio) didn’t pull its punches in terms of depicting the homoerotic elements.

The two stories that comprise “In the Spotlight” both have theatrical connections, one featuring a production of Twelfth Night and the other concerning an all-male version of Chicago. There’s another gender bending piece of theatre – the Mary Sunshine role is usually played by a bloke and the main female roles always suggested to me that they could be played in drag. I explore that notion in the “All that Jazz” novella.
Back to Twelfth Night, though, because it has a pair of characters I’ve had many a moment’s thought about – Antonio, the sea captain, and Sebastian, the young man he rescues. What makes a hard edged ex-pirate go all gooey over a hardnosed and callous young man? Antonio in this play is just as besotted as Antonio in The Merchant of Venice who gets his pants in a panic over Bassanio. Both talk of the love they bear the younger man, both deliberately risk their necks for their objects of affection...did old Will know a man called Antonio who was in the same boat? Or (and this is me making a huge deductive leap) is Will talking about his own situation, as can be read into the sonnets and his affection for a beautiful young man?

Because Charlie Cochrane couldn't be trusted to do any of her jobs of choice—like managing a rugby team—she writes. Her mystery novels include the Edwardian era Cambridge Fellows series, and the contemporary Lindenshaw Mysteries. Multi-published, she has titles with Carina, Riptide, Lethe and Bold Strokes, among others.